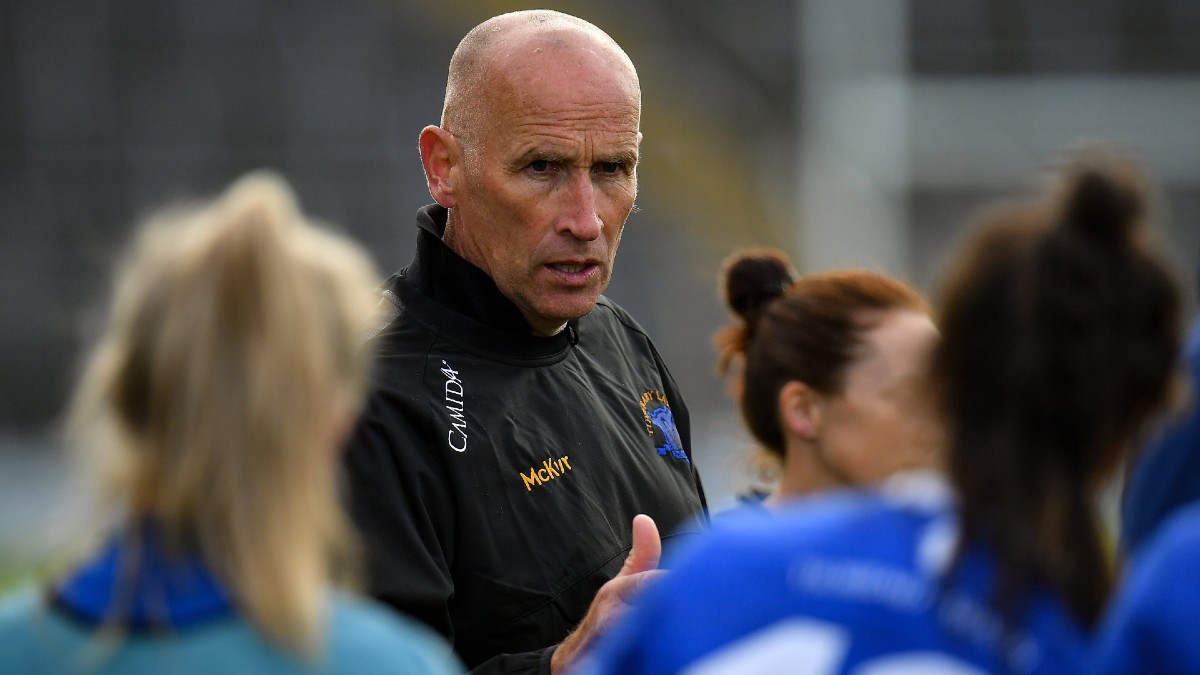 (Tipperary manager Declan Carr talks to his players after the Lidl Ladies Football National League Division 1B Round 3 match between Tipperary and Dublin at Semple Stadium in Thurles, Tipperary. Photo by Seb Daly/Sportsfile)

Between raising five daughters, managing a senior inter-county Ladies football team as well as three club teams, and being business director of a cement company, it’s amazing to discover that Declan Carr is also a seven-handicap golfer.

When he’s not spending quality time with his wife Niamh and the rest of the family, or exploring his other love, Gaelic games, you might find the Holycross-Ballycahill clubman playing a round of golf at New Forest in Tyrrellspass, County Westmeath.

But such are his LGFA commitments, the man who captained the Tipperary hurlers to a Liam MacCarthy Cup success in 1991 wasn’t able to watch last Sunday’s All-Ireland SHC decider between Limerick and Cork.

“I went down to Mallow to see my daughter Kate playing an U-16 football game and then rushed back to see an U-21 game, I was the manager of one of the teams.

“It was a club league final at 3pm so I actually missed the All-Ireland.”

But Carr relishes the busy lifestyle and having taken over the Tipperary Ladies footballers at the start of 2021, he knew what he was facing into.

The brother of former Dublin manager, Tommy, had big shoes to fill when Shane Ronayne departed for the Waterford men’s football hot-seat. The Cork native had led Tipperary to four national titles in four years while he was in charge.

But after a Covid-19 disrupted 2020 and the long winter that followed, Carr was on the backfoot. He still makes no excuses for Tipperary’s relegation from Division 1 of the Lidl National Football League.

Today, they will look to avoid another demotion when they face Tyrone in the TG4 All-Ireland Senior Championship relegation play-off.

Carr had to put up with some dreadful luck, Orla O’Dwyer had her early season involvements curtailed while fellow WAFL star Aisling McCarthy only became available again recently.

Samantha Lambert had retired at the start of the season leaving a huge gap in the captaincy department. 2019 LGFA Intermediate Player of the Year, Aishling Moloney, stepped up to fill the void but she was cut down by dreaded cruciate knee ligament damage, while Emma Morrissey is another player who was ruled out with a long-term injury.

“The one thing I want to say from the outset, and I have been consistent in saying this, it is not to come across in the form of excuses or pity,” said Carr.

“We had prepared, after Covid, we came back together and Emma Morrissey was very impressive in our training games as a forward. A comfortable player on the ball in terms of taking scores. And if you look, that is where our pinch point is at the minute. That sort of comfort in terms of somebody who can get, I won’t say easy scores, but can take them more easily.

“She was a big loss too and now the two Kennedy girls (Caitlin and Anna Rose) are medium to long-term injuries. They are massive players for us as well.

“And with Aishling Moloney, I want to be really clear about this, she didn’t let the head drop at any stage. It was serious and she got straight into prep for her treatment straight away. There was no kind of hanging around feeling sorry for herself.

“She made a massive effort to be in good shape going in for the treatment she needed. She is on the other side of that now and already making strides to get back.

“It is a slow-burner but if we could say that Aishling Moloney would tog out next year in the National League or play some part later in the League, it would be a great result.”

Tipperary will be playing in Division 2 next term but first they are determined to finish this season on a high and ensure their safety in the top tier of the championship this weekend.

“Tyrone are fighters and you don’t like getting into relegation battles with fighters,” said Carr.

“It is a kind of whatever it takes. What we have tended to do with the situation we are in is try and get our own game in order. Will we identify players and positions, absolutely, we will try our best to manage it. But again, we probably need to put more scores on the board.

“For the first ten minutes against Kerry we had the ball 95 percent of the time but it was still 0-1 to 0-1 after ten minutes. Our focus will be our own performance.”

Carr is a student of the game, and he has learned so much from his experiences so far this year but he still has a wealth of knowledge to implore on this Tipperary set-up.

Kate is on the U-16 Tipperary team while Issy represents the county at U-14 level, but they all are Holycross-Ballycahill through and through.

“And we do have a great relationship. We talk openly and honestly about everything and we would leave nothing to fester.

“That is just the way we are, in terms of, if there is a problem it gets talked about, it gets addressed and there’s the solution. It seems to work. It is working at the minute, thank God.”