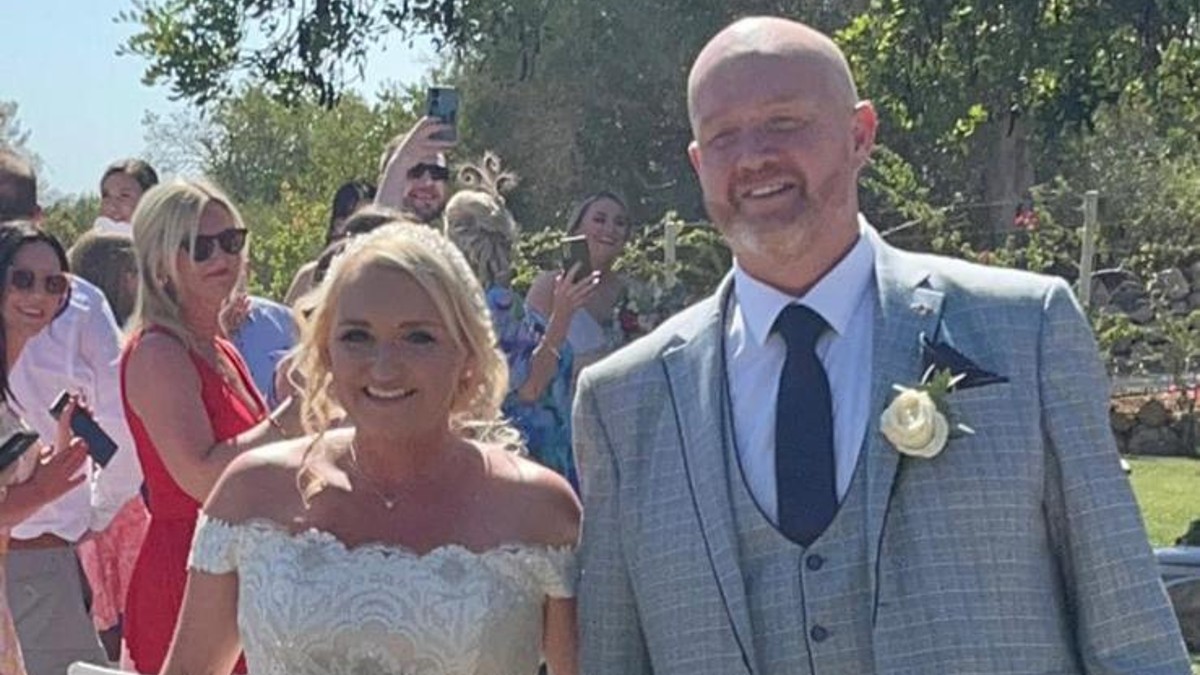 Last weekend, James Daly and his wife, Jill Doherty, were basking in the Albufeira sunshine in the aftermath of their wedding.

The glorious heatwave might remain in Armagh’s Athletic Grounds this evening but that is where the similarities end, as Daly looks to lead Fermanagh to glory in the TG4 All-Ireland Junior Championship Final replay (5pm).

It is a second bite of the cherry for both sides after a titanic tussle at Croke Park 13 days ago, when Antrim were reeled in before the Saffrons had to pull off their own heroics late in the game.

And with his newlywed Antrim wife in the stands watching on, Fermanagh boss Daly hopes his team can bounce back to the Intermediate ranks with victory today.

“Jill is a Belfast woman but she is all Fermanagh now. Her and her whole family are all rooting for Fermanagh,” said Daly.

“The first game was great, at one point we were struggling to stay in the game and then we came back.

At one point it was looking like if we could hold onto the ball we could have won the game.

“Probably a draw was a fair result at the end of the day. Antrim had done enough to get that. They got that last gasp free kick and the replay wasn’t the best case scenario for me but that is sport.”

Once the game ended at Croke Park on 31 July, Daly went into wedding planning mode before he jetted off to Portugal with his son, Ryan, the following day. They were preparing to welcome 120 guests from Ireland to the sunny Algarve.

“We were meeting and greeting and seeing people coming in and having the craic. It’s been a great couple of weeks to be honest,” said Daly.

“One of my friends texted me on the Thursday: ‘how are the nerves coming up to the wedding?’ I said those nerves are fine, nothing compared to the nerves going into Croke Park.

“I knew how the day was going to pan out and all of that. Sunday into Monday was more to do with a wee bit of disappointment that we hadn’t got the job finished. But it was then turning your attention to making sure everything was in place for that week while you were away.

“We weren’t going to reinvent the wheel in the last two weeks. We wanted to keep the girls sharp, and sit down as a team and watch the game. Pick out a few things and just basically making sure that it all happened while I was away with the wedding.”

Caoimhe Marley Morgan and Ryan Hyde both attended the wedding before they headed back to Fermanagh, looking to keep the team on track in Daly’s absence.

Daly eventually relaxed and focused on a dream wedding, even with the big game on the horizon, and one eye always transfixed on the West County Hotel Cup.

“We had a beautiful day up in the Portuguese hills,” said Daly.

“The wedding was about a half an hour outside of Albufeira. It was about getting all built up for that but at the same time making sure the girls were focused on what the job at hand was on Saturday evening, now that we know the game is in Armagh.”

Daly hails from County Armagh, is a Dromintee clubman and he has three grown-up children.

One of his daughters, Katie, played for Armagh, winning All-Ireland medals at a couple of levels, but she now lives and works in Boston. His son, Ryan, was part of the Fermanagh management all summer but he is teaching in Doha and his other daughter, Megan, is a dietician in Liverpool.

In 2014, however, Daly’s world was rocked when his wife, Ann, died from cancer.

They were the toughest times after that but Ladies football has always been a central theme to help him stay grounded. And today is another one of those huge games that will mean so much.

He arrived back from Portugal yesterday morning and oversaw the last training session before Fermanagh take to the Athletic Grounds today.

“When we came into the season, our biggest struggle was the fact that eight first team players from last year had decided to take a year out,” said Daly.

“This is a team that hadn’t won a game last year in intermediate. Eight players decided for one reason or another that they would take a year out. We had to deal with that, we have had to roll up our sleeves. We had to go out into the county and find more players and we have done that.

“When I look at the age of the players; Eimear Keenan, Cadhla Bogue, Niamh McManus, these are young kids, all teenagers. Then you go up and you look at the likes of Molly McGloin, the captain, 21, Eimear Smyth, Bláithín Bogue, these are all young girls, 20 or 21 years old.

“For us to have such a young team and be in the All-Ireland final and to be down four points with about 12 minutes to go, we weren’t looking good but then all of a sudden there is always a shift in the game and if you can get the shift to go your way.

“We got the penalty at the right time and Eimear put that away well. For young Erin Tierney, 17-year-old, to pop up with that 30-yard point to equalise it and that was nothing but over the black spot.

“We have such young talent in this team and we feel that we’re probably, I have said it a few times, we are probably a wee bit ahead of our curve. I did not think we were going to pop back up this quick but there is such serious talent in this county.

“And if we don’t it’s nothing to be ashamed of. These girls are a good bunch of girls. No matter what happens, they will be ready to play for Fermanagh next season.”