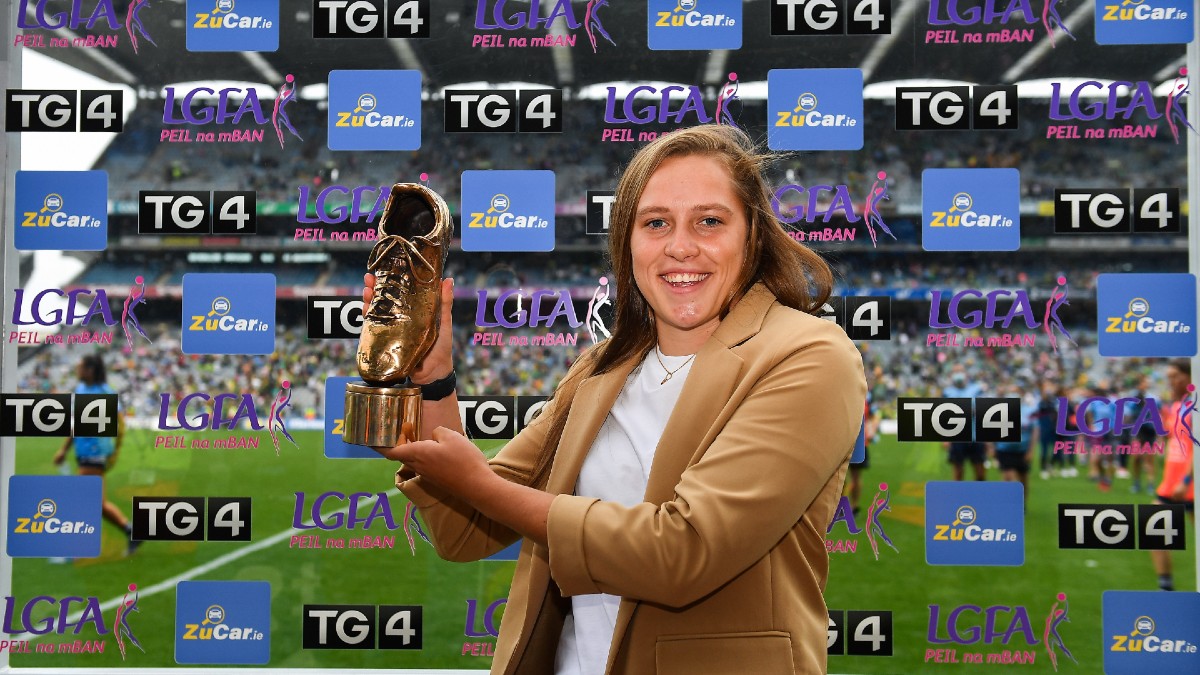 (Cliodhna Ni Shé of Carlow with her Golden Boot award after the TG4 All-Ireland Ladies Senior Football Championship Final match between Dublin and Meath at Croke Park in Dublin. Photo by Eóin Noonan/Sportsfile)

CARLOW forward Clíodhna Ní Shé is the inaugural winner of the ZuCar Golden Boot award, the prize for finishing as the leading scorer in the 2021 TG4 All-Ireland Championships.

Ní Shé, 21, from the Bennekerry/Tinryland club, finished the campaign on top of the pile after collecting 9-19 during Carlow’s Championship season.

Carlow may have exited the TG4 All-Ireland Junior Championship at the semi-final stage, after extra-time against Antrim, but Ní Shé was in brilliant form and scorer of 3-5 in that game.

Earlier in the campaign, Ní Shé also collected a hat-trick of goals (3-2) in defeat to Wicklow, who would go on to be crowned Junior champions.

Dillon and Kealy were still in with outside chances of catching Ní Shé prior to yesterday’s TG4 All-Ireland Finals.

Dillon scored 1-6 in Westmeath’s comprehensive victory over Wexford in the Intermediate decider to move her on to 5-23 (38 points), as Kealy scored three points in Wicklow’s Junior Final win against Antrim, to finish the campaign on 0-38.

Clíodhna was presented with her award at Croke Park on Sunday by Allyson McCarthy, Divisional Marketing Manager at ZuCar.

Commenting on the award, Clíodhna said: “It’s such a huge honour for me. Carlow haven’t had the chance to play at Croke Park yet and unfortunately we didn’t make it this year but it’s still recognition from a Junior team across the three grades.

“It was great to be at Croke Park on such a big day and also to witness such a great match between Dublin and Meath.

“I’d like to thank Golden Boot sponsors ZuCar for this award – and thanks also to my Carlow team-mates for their efforts this year.”

Speaking on behalf of ZuCar, Gavin Hydes, ZuCar CEO: “Huge congratulations to Clíodhna for being the inaugural winner of the ZuCar Golden Boot and to all of the challengers.

“Outstanding achievement by all, and we are very proud to be the performance partner of the LGFA.”