FOOTBALL: Dealing with grief – The Big Interview with Aoibheann Leahy of Meath 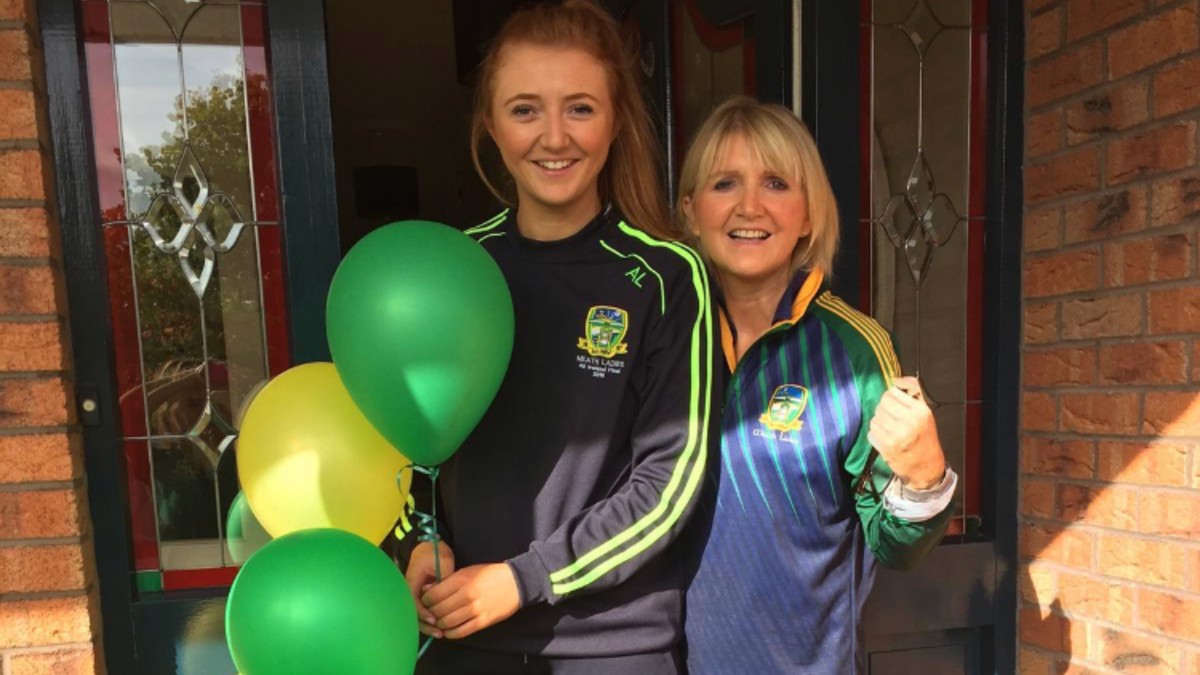 For Aoibheann Leahy, game day used to be the most difficult, but she has learned to focus on the opposition in front of her and compartmentalise the pain and anguish that lingers.

Two years ago, it was a weekend where she should have been playing for Meath in a Leinster Intermediate Final but instead, she was saying goodbye to her adoring mother.

The 29th of June 2019 will be forever imprinted in her memory, the day Dorothy Leahy lost her battle with cancer.

“You go to matches and you see people with their mams. This continues to be really hard for us. It’s not envy, but you just miss having your Mam around to share the excitement of playing and winning.

“If Mam was here, she would be delighted and proud to have seen me play on All-Ireland final day in Croke Park. After games, I would look over and see Dad on the sideline and that’s hard.

“But on match-day I have fire in my belly. You know she is with you. It gives you the strength to keep going.”

The 27-year-old comes from a typical Irish sports-mad household and Gaelic Games is the focal point.

Her dad, John, is a handballer and former Galway minor and U-21 hurler.

Her sister, Ailbhe (21), is a current member of the Meath Ladies panel too while her brother, Patrick (24) plays football and hurling with the local Navan O’Mahony’s and featured at underage level for Meath also.

But along with John, Dorothy was the driving force behind the scenes, their biggest supporter. And when she was diagnosed with breast cancer in 2014, it was a lot to take for Aoibheann, who was in her first year of college at St Patrick’s College, Drumcondra.

“There was just a bit of disbelief. You heard of it but you didn’t think it would come so close to home,” said Leahy.

“She had the operations and treatment but she never complained. She went through the whole process and got the all-clear. I was in college at the time and I was up in Dublin and coming home at the weekends. I was young too so I didn’t really fully understand what was happening.

“The treatment was hard on her and she was sick but she was going to get over it and that was never a doubt in our minds. That is what she was told. You have the treatment and you have the operations, they will get it sorted, they had gotten it early.”

Meanwhile, Leahy was in the process of forming a career with the Royals. She had just joined the Ladies football panel in 2013 and combined her county career with football and camogie at Navan O’Mahony’s.

But she always had to mask the fear of a potential second bout of cancer devastating the household. Unfortunately, in 2018, Dorothy developed a pain in her back and went to get it checked.

“I will never forget getting the news that it (cancer) was back,” said Leahy.

“The doctors are telling you that we have to do X, Y and Z but it is not going to cure it. But there is always hope.”

Dorothy attended the Gary Kelly Cancer Support Centre in Drogheda and her spirits remained high even during the worst of it.

“Mam used to say, there are people over there that are going through this treatment for the last year and they are just living with cancer. You can live with it,” said Leahy.

“She had a year, really. In that space of time, we continued as normal. You have your days where you say, God, I can’t believe it. You just get on with things.

“Mam wouldn’t have wanted us to stop doing anything that we like doing, especially sport and work and school, studying and everything.

“We just got on with it. There was always hope in the back of your mind, that was the one thing she held onto.”

But while the Leahys had to say their final goodbyes on that dreadful June Saturday, Aoibheann didn’t have to look far for her support network.

“The day after she passed away, the girls played in the Leinster Final,” said Leahy.

“That night after the game, the girls were all fairly deflated, they lost that match. I remember some of them saying to me: ‘Aoibheann we all just thought on the bus we can’t be disappointed about the match or anything because there are so much more important things in life.’

“The girls all came to the house for Mam’s wake. They all came in their Meath tracksuits. I will never forget that moment. They came in groups so they wouldn’t all be coming in as one team.

“None of the girls had to say anything to me, you just knew they were devastated for me.

“The memory is like a video-clip in my mind. I can clearly remember the girls and management coming into the sitting room. It means so much when you have familiar faces like that and you know you have those people there for you in those times.”

Leahy has become an inspiration for many in the current Meath panel. And having battled her way from the fringes all the way to a starting spot this year, she will marshal the defence in tomorrow’s huge TG4 All-Ireland Senior Championship semi-final clash with Cork at Croke Park.

“We went down to Intermediate and had to build back up again,” said Leahy.

“It took a lot of hard work from management, the backroom team and all the players that have come and gone. It is now that we are reaping the benefits and it is great.

“But there has been a lot of work done behind the scenes and it just doesn’t happen overnight.

“After winning the intermediate, obviously it was going to be a huge step up into senior. We knew we were able for it and we are a senior team.

“To get to an All-Ireland senior semi-final, in one sense, is just the stuff of dreams and we just want to keep it going now.

“It would be unbelievable if we could get to an All-Ireland senior final in Croke Park this year.”