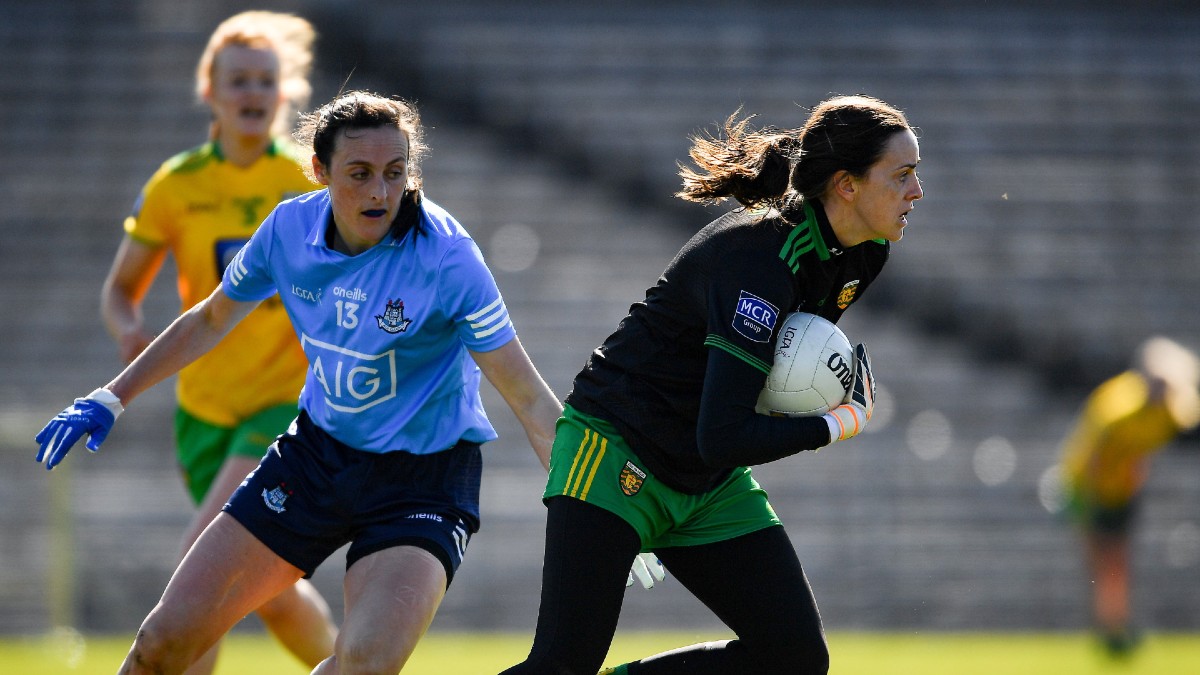 Late goals from Emma McCrory and Yvonne Bonner booked Donegal their place in a first Lidl National Football League Division 1 final since 2017 after victory over Dublin.

Donegal led by 0-7 to 1-2 at half-time but Dublin hit back and were four in front with 57 minutes on the clock at St Tiernach’s Park in Clones.

However, substitute McCrory was first to the loose ball when it ricocheted off the bar for Donegal’s first goal, before Bonner fired to an empty net a minute later securing a last gasp win for Maxi Curran’s side.

Dublin attacked early and spurned two chances before Lyndsey Davey got her side’s only point of that quarter on six minutes. Thereafter, Donegal dominated and Geraldine McLaughlin levelled the game from a free.

Two Karen Guthrie frees in as many minutes pushed her side into a two-point lead. Donegal continued to dominate possession and McLaughlin converted another score on 14 minutes after Guthrie was fouled.

As Dublin turned defensive, Kate Sullivan excelled but it was Donegal that went into the water break the happier as Guthrie added her first point from play to ensure Donegal led by four at the break.

Dublin went on the attack immediately when play resumed and were unlucky not to score when a terrific run from Jennifer Dunne right at the heart of the Donegal defence resulted in a free for Sullivan. Then there was a mix-up in the defence, Hannah Tyrrell intercepted and the TG4 All Star made no mistake with the finish for Dublin’s goal.

Sullivan scored too but Donegal persevered and a point from play for Bonner, along with a third Geraldine McLaughlin free sent Donegal in with a 0-7 to 1-2 lead at the break.

Sullivan converted a free within two minutes of the restart to reduce the deficit. They didn’t have to wait long for the equaliser as Davey converted her second point on 37 minutes to level up the scores.

Nicole Owens kicked Dublin in front on 37 minutes only for Bonner to level it again, but Dunne grabbed her first score to send Dublin into the second half water break one point ahead.

Orlagh Nolan added a point, as did Sinéad Aherne on her seasonal reappearance. A free from Tyrrell and a terrific score from Owens handed Dublin a four-point lead late on.

However, Donegal weren’t finished yet and goals from McCrory and Bonner meant they advanced.

“Heart stopping stuff. We left it late and we definitely got the rub of the green but look we’ll take that,” said Donegal manager Maxi Curran.

“We are just very happy and proud of the girls for the effort they put into it.

“It’s a day out in Croke Park now, it’ll really sharpen us up for the next few weeks at training as well which is lovely and it’s something for the girls to look forward to. It’s great for us.”