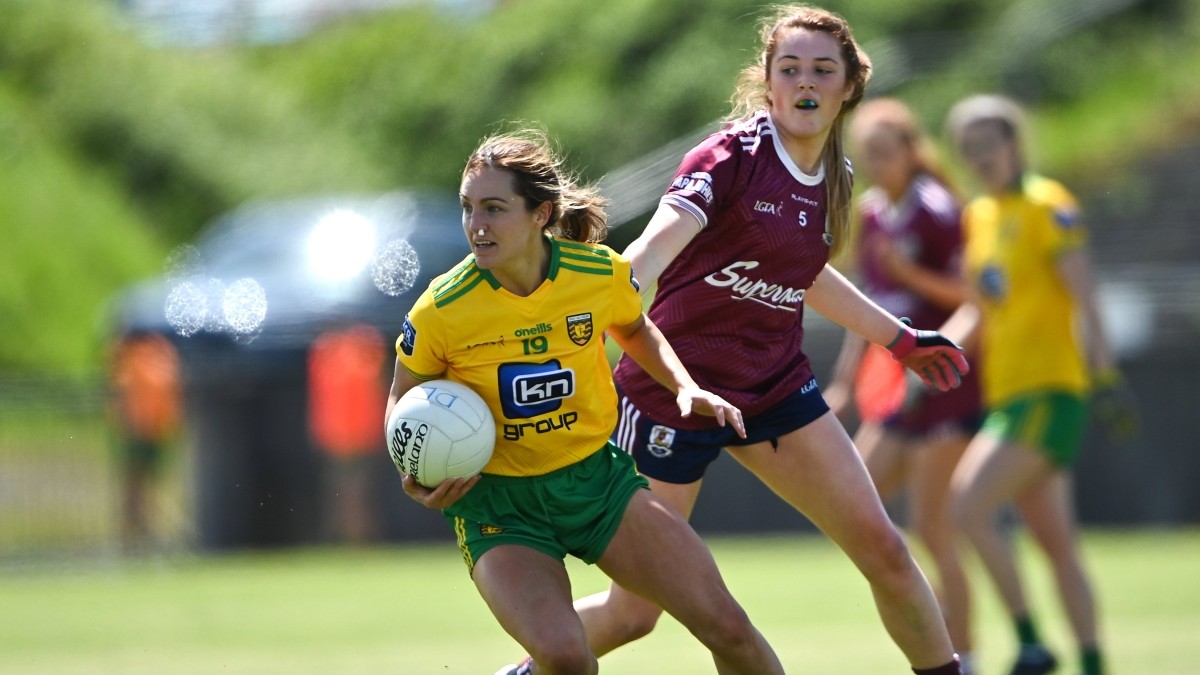 By Tomás Keating (Amy Boyle Carr of Donegal in action against Laura Ahearne of Galway during the Lidl Ladies Football National League match between Galway and Donegal at Tuam Stadium in Tuam, Galway. Photo by Piaras Ó Mídheach/Sportsfile )

Geraldine McLaughlin and Karen Guthrie were in sublime form as Donegal launched themselves into the Lidl National League Division 1 semi-finals against Cork, with a dominant victory over Galway at Tuam Stadium.

It was the Tribeswomen that got off to a blistering start as right from throw-in, Olivia Divilly found her club-mate Nicola Ward, who fisted over, with Kate Slevin scoring from the resulting kickout to put Galway 0-2 to 0-0 after 45 seconds.

However, Donegal wasted no time in cancelling Galway’s advantage and Geraldine McLaughlin and Niamh Hegarty linked up to find Karen Guthrie, who buried to the net. Guthrie clipped over a point soon after, as Maxi Curran’s side led 1-1 to 0-3 after a lightening two minutes.

Andrea Trill and Geraldine McLaughlin traded frees, until the latter’s brilliant solo-run stuck the top of the crossbar but spun over. Galway were unlucky not to have a scored a goal, but Ward’s effort was brilliantly stopped by ‘keeper Aoife McColgan, but went over.

Upon resumption, Galway upped the ante with Siobhán Divilly, Trill (free) and Olivia Divilly scoring, but Geraldine McLaughlin’s free in between kept Galway at bay. Seoighe and Geraldine McLaughlin again traded scores, until Donegal effectively put the game to bed as McLaughlin struck a brace of goals before half-time as Donegal led 4-8 to 0-9 at the interval.

Half-time substitute Leanne Coen almost made an instant impact but her effort was saved by McColgan. However, Galway looked to breathe life back into their attempt of a comeback as Seoighe blasted a fantastic goal.

Donegal cancelled Seoighe’s goal out with three points on the bounce, although Megan Glynn goaled against for Galway to make it 4-14 to 2-10.

But that was as good as it got for the home side, as Donegal outscored them 0-7 to 0-1 in the final 20 minutes to canter to victory.