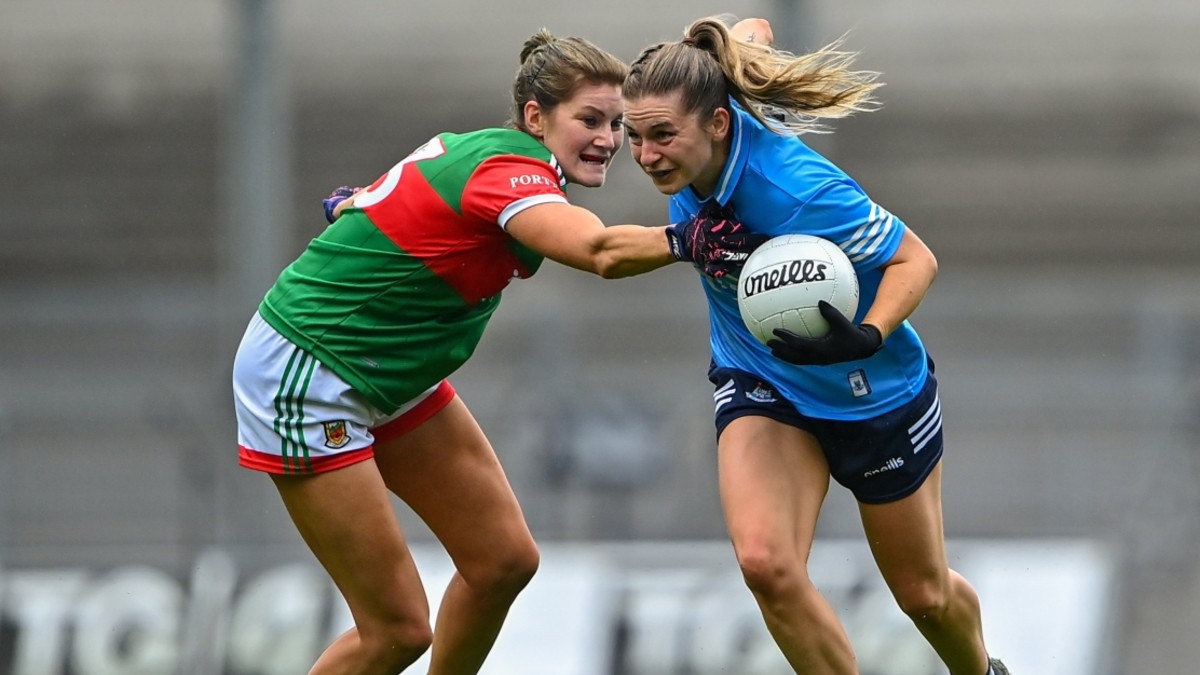 By JOHN FALLON (Martha Byrne of Dublin in action against Grace Kelly of Mayo during the TG4 Ladies Football All-Ireland Championship semi-final match between Dublin and Mayo at Croke Park in Dublin. Photo by Piaras Ó Mídheach/Sportsfile)

Dublin remain on course to win a fifth TG4 All-Ireland SFC in a row after qualifying for their eighth final in a row with this five-points win at Croke Park.

Mick Bohan’s charges, despite having to make three late changes as Niamh Collins, Carla Rowe and Niamh McEvoy were unable to start through injury, never trailed in an entertaining contest as the champions did enough to hold off Mayo’s challenge.

Dublin wasted little time in building a lead with the breeze behind them and efforts from Niamh Hetherton, Hannah Tyrrell, Caoimhne O’Connor and Siobhán Killeen pushed them 0-4 to 0-0 in front after eight minutes.

But Mayo hit back after that and good work from Lisa Cafferky and Shauna Howley ended with Sarah Rowe shooting to the net to cut the gap to the minimum.

The response from the champions was impressive. Lyndsey Davey intercepted a kickout and set up O’Connor for a goal and after Killeen pointed, captain Sinéad Aherne tacked on another couple of points to lead by 1-7 to 1-0 after 13 minutes.

Rachel Kearns pulled back a free for Mayo and then after Killeen got her third point, Kearns finished to the net after being set up by Sinéad Cafferky following a good passing movement.

But once again the response from Dublin was good and another point from Aherne and one from Davey saw them lead by 1-10 to 2-1 at the interval.

Tyrrell and Kearns twice exchanged points in the opening eight minutes of the second-half. Mayo enjoyed plenty of possession with Kearns leading the attack but each time they reduced the margin, Dublin responded with a score.

Shauna Howley pointed a free for Mayo but Tyrrell hit back with another point. Grace Kelly pointed for Mayo and Lisa Cafferky saw a goal effort come back off a post before Dublin hit two in a row with Aherne pointing and Tyrrell crowning a wonderful week in which she got married by shooting her fifth point of the game from play.

A point from play by Howley cut the gap to 1-15 to 2-6 before the second water break but it was Dublin who extended their lead to seven points on the resumption when wing-back Orlagh Nolan went forward to shoot a good score.

Kearns cut the gap to two goals with ten minutes remaining when she pointed a free after the was fouled and Lisa Cafferkey reduced the margin to five, but Aherne hit her fifth point from a free and they restricted Mayo to just another point from the impressive Kearns as they advanced to another final.