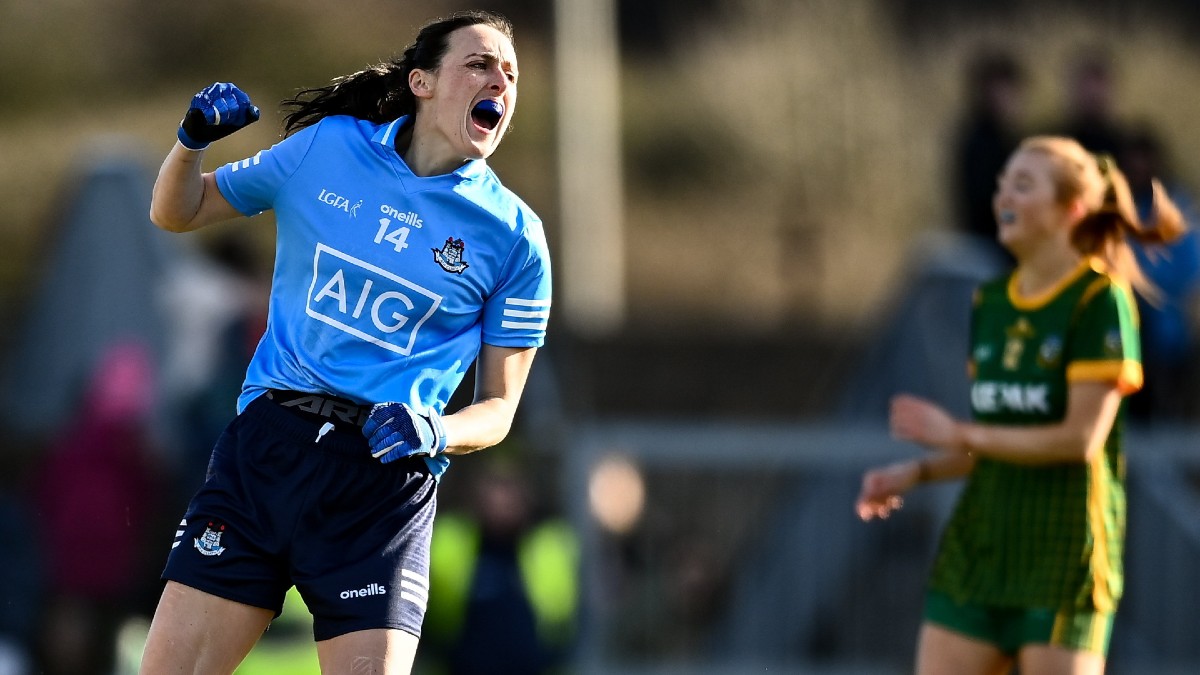 Hannah Tyrrell scored a last gasp free to help Dublin secure top spot in Division 1B of the Lidl National Football League with a landmark win over Meath.

This was the first meeting of the sides since the TG4 All-Ireland Senior Championship final at Croke Park last September and they were both already assured of their places in the semi-finals.

They were level on five occasions and after Dublin took a 0-6 to 0-5 lead into half-time, Tyrrell’s goal and late free was enough to seal the win. Emma White scored the Meath effort but the reigning All-Ireland champions fell to their first loss of the season at home in a raucous Páirc Tailteann.

The game got off to a tentative start with both defences holding tight although the goalkeepers were tested early with Monica McGuirk pulling off a save from Siobhan Woods while Kelsey Nesbitt’s shot fell into the hands of Ciara Trant up the other end.

Niamh Hetherton scored first in the 12th minute and the sides were level just before the first water break as Stacey Grimes converted a free. And Meath could have gone in ahead but Trant blocked down a Nesbitt shot after a well-timed pass from Shauna Ennis.

Nicole Owens pushed Dublin into the lead while Caoimhe O’Connor extended it a minute later. Grimes scored her second free but that was cancelled out by a super Woods point.

Vikki Wall reduced the gap to one before Grimes levelled the game with her third free. But Woods sent the ball in and Tyrrell made it 0-5 to 0-4 on the resumption.

A terrific pass from Wall played Orla Byrne in and she levelled the game before Kate Sullivan scored a free to give Dublin a 0-6 to 0-5 half-time advantage.

Grimes levelled again after the restart but Dublin got their goal in the 36th minute. A Sullivan cross was well gathered by Nicole Owens, she found Tyrrell who, with inches of space, shot to the back of the net.

Substitute White hit back with a Meath goal straight away and she pushed Eamonn Murray’s side into the lead for the first time on 41 minutes. But Tyrrell continued to take the fight to the Meath defenders and a couple of scores sent Dublin into the second water break leading by 1-8 to 1-7.

Dublin were dealt a huge blow when Ellen Gribben was sent-off on a straight red card before Grimes drew the sides level again.

Owens and Wall were shown yellow cards late on and both teams had their chances but it was Tyrrell’s free that ensured Dublin won it.