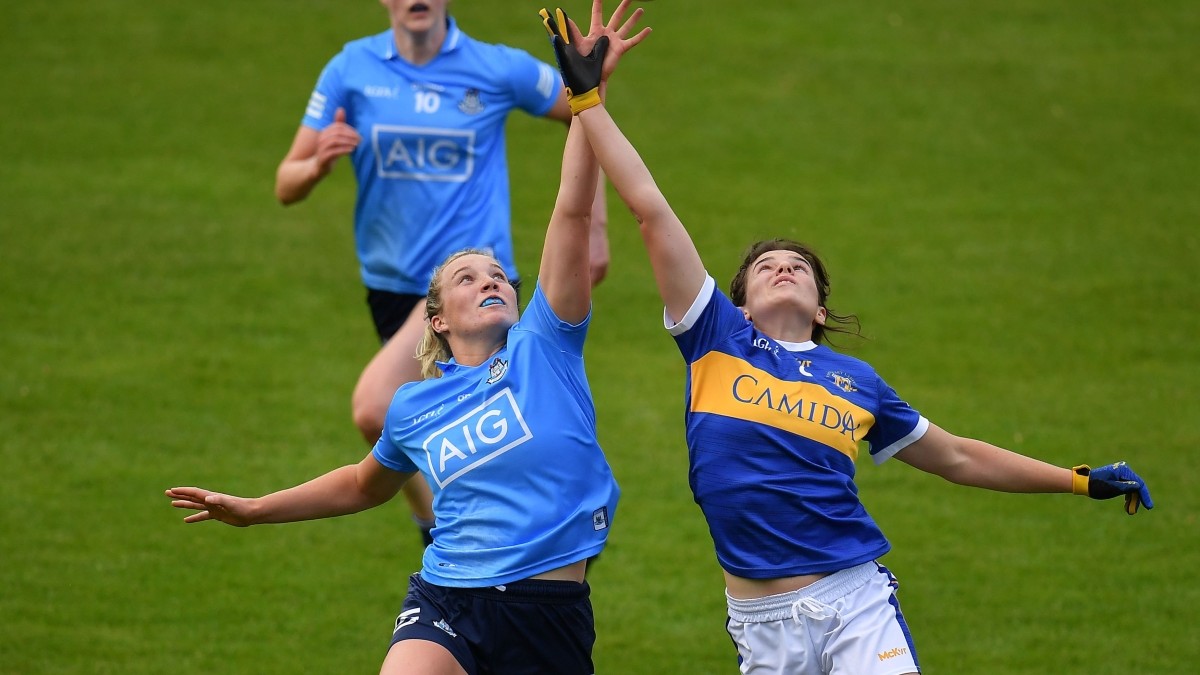 By Aisling Clery (Caoimhe O’Connor of Dublin in action against Maria Curley of Tipperary during the Lidl Ladies Football National League Division 1B Round 3 match between Tipperary and Dublin at Semple Stadium in Thurles, Tipperary. Photo by Seb Daly/Sportsfile)

Caoimhe O’Connor hit the late goal her stellar showing deserved as Dublin maintained their perfect start to the Lidl National Football League Division 1B with victory over Tipperary at Semple Stadium.

Siobhan Killeen also found the net for Mick Bohan’s side, who sailed into next Saturday’s Division 1 semi-final following a dominant show against Declan Carr’s side.

Tipperary were second best by a distance but the early loss of Emma Morrissey and captain Aishling Moloney to leg injuries meant they faced their comeback without two of their leaders.

The first quarter was a scrappy affair with both defences on top. Niamh McEvoy opened the scoring straight in front of the posts and indeed this was the only score in the first 16 minutes.

The game opened up after the water break though and two Sinead Aherne points stretched the All-Ireland champions to a three-point lead. Jennifer Dunne was involved in both scores with Leah Caffrey and Killeen both showing well. A minute later, Dublin were four up: a foul on Aherne led to Hannah Tyrrell’s first converted free.

On the resumption, a terrific individual run by Caitlin Kennedy was well rewarded with Tipperary’s first score after 21 minutes of play. A minute later, Tipperary had their second, Roisin Howard splitting the posts from wide on the left.

With defences on top, scores were at a premium in the opening half while the post also denied Aherne. The resultant 45’ was palmed into the path of Aherne by McEvoy and the captain added to Dublin’s tally.

McEvoy added her second a minute later before the highlight of the half arrived when Killeen raised the only green flag of the opening 30 minutes, following some excellent play by McEvoy in the build up.

Dublin were 1-7 to 0-3 clear at the break and also got the better start in the second half, Niamh Hetherton and Aherne (2) pointing, while Tyrrell added her third free. Tipperary were running at the Dublin defence but it stood resolute with Niamh Collins marking her first game of the season with a solid display.

As a myriad of substitutions rolled in, Dublin’s points tally increased. Substitute Michelle Davoren split the posts before Hannah O’Neill’s rasping effort rebounded off the crossbar. O’Connor was first to the loose ball to ensure it finished to the net.

The outstanding O’Connor added a late point, but the four-in-a-row All-Ireland champions will have to wait until tomorrow before finding out their semi final opposition.