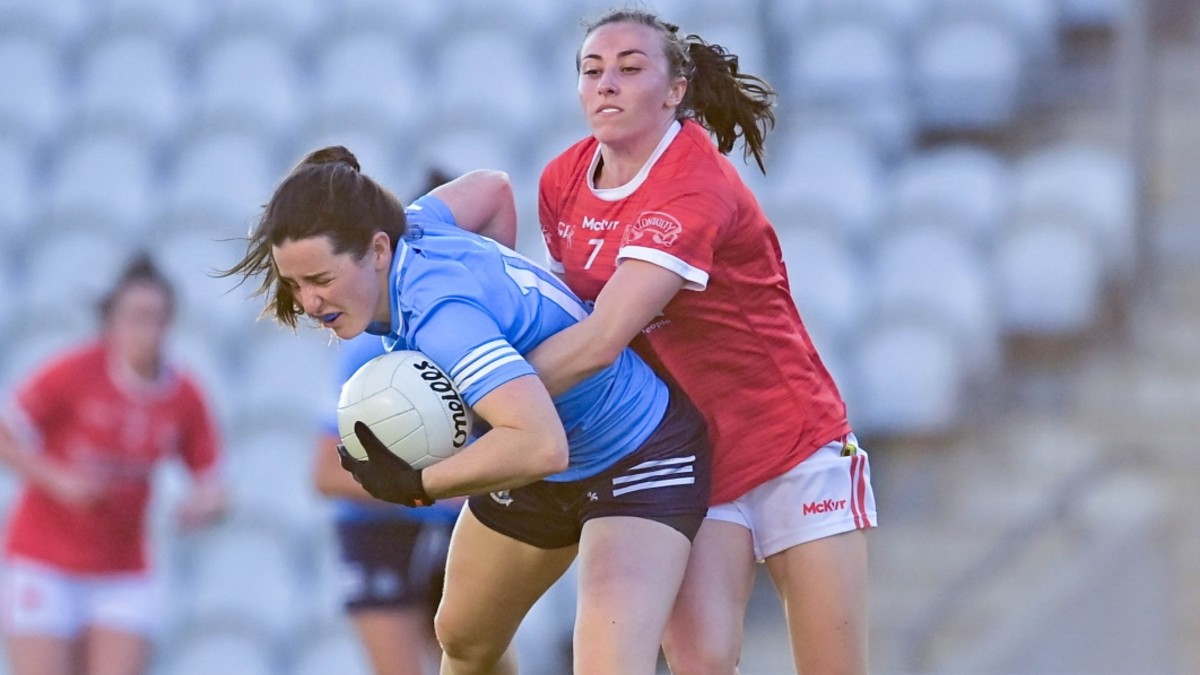 (Lyndsey Davey of Dublin is tackled by Melissa Duggan of Cork during the Lidl Ladies National Football League Division 1B Round 1 match between Cork and Dublin at Páirc Ui Chaoimh in Cork. Photo by Eóin Noonan/Sportsfile)

IN a simply sublime game Dublin held on for a one-point win over Cork in their Lidl National Football League Division 1B clash at Páirc Uí Chaoimh.

Hannah Tyrrell turned on the style to help Dublin come back from a four-point deficit and her tally of 2-2 in a three-minute spell in the second half was telling.

Dublin were two points clear at half-time, but goals from Hannah Looney and Sadhbh O’Leary straight after the restart gave Cork the belief that an upset was on the cards.

However, a stunning third quarter from Tyrrell saw her goal twice, while Lyndsey Davey’s palmed effort made sure of the win for Dublin.

An Emma Cleary penalty nine minutes from time lifted Cork’s hopes again and Ciara O’Sullivan hit a fourth Cork goal. And Cork were unlucky not to draw but Cleary’s effort came back off the post in the final minute.

Dublin were in front three minutes in when Davey scored from a free with Orla Finn replying for Cork.

A sweeping move, involving Davey and Jennifer Dunne put Lucy Collins in for Dublin’s second point as they were dominating possession in the early stages.

A Finn free had the home side back level and Cork were unlucky not to go in front after nine minutes.

Melissa Duggan was clean through but Dublin keeper Abbey Sheils saved superbly to deny her what looked like a certain goal.

Dublin then took over and they put massive pressure on the Cork kick-outs which led to them regaining possession and they rattled off three points, all coming from overturning the ball.

Another pointed free from Finn put two between the sides, with Davey on target again for Dublin,

Finn hit two more to put one between the sides before Sheils made another great save, this time denying O’Leary from a tight angle. From the resultant 45 O’Leary was again denied by Sheils.

Scores from Tyrrell and Collins increased the visitors lead before Finn got her sixth free of the half as Dublin deservedly lead 0-8 to 0-6 at half-time.

Whatever Cork manager Ephie Fitzgerald said to his side at the break, it certainly worked – at least early in the second-half anyway.

In the first two minutes they hit 2-1, with Looney getting the first goal. Ciara O’Sullivan pointed from the restart before O’Leary scored Cork’s second. And they could have had a third, this time Sheils denying Finn as Cork led 2-7 to 0-8.

But Dublin showed why they are TG4 All-Ireland champions and hit back with a point from Tyrrell and this was quickly followed by a goal from Davey. O’Sullivan replied for Cork, but two goals and two points in three minutes from Tyrrell put Dublin back in control, 3-11 to 2-8.

Dublin kept on the pressure but Cork were thrown a lifeline late on, O’Sullivan played O’Leary in but she was taken down by Orlagh Nolan for a penalty, which also saw her sin-binned. Cleary coolly slotted home to make it 3-9 to 3-13.

Finn added a point and with time running out O’Sullivan got Cork’s fourth goal, to put only a point in it, but Dublin held on for the win in an enthralling game.