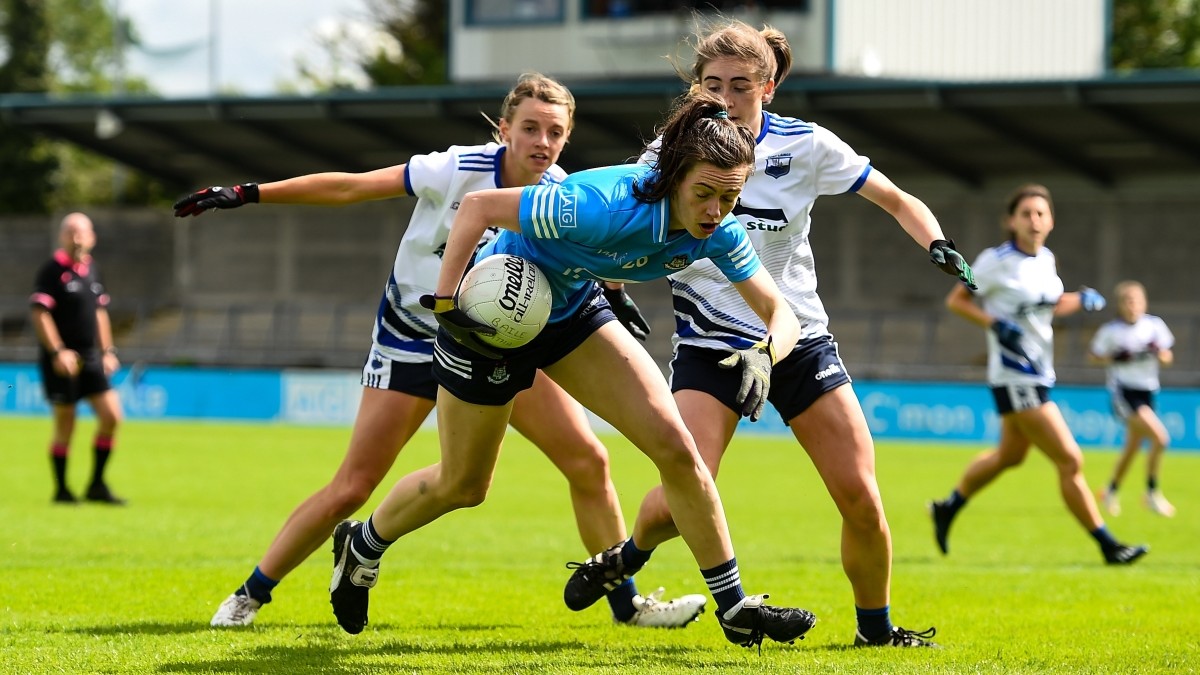 Michelle Davoren of Dublin in action against Laura Mulcahy, left, and Rebecca Casey of Waterford during the Lidl Ladies Football National League Division 1B Round 1 match between Dublin and Waterford at Parnell Park in Dublin. Photo by Ben McShane/Sportsfile

In a game that was dubbed a dress rehearsal for Championship, Dublin welcomed back Olwen Carey, Siobhan Killeen, and fresh from their endeavours in Australia, Lauren Magee and Niamh McEvoy.

Waterford did get off to a quicker start and dominated early possession, Maria Delahunty hit one from play and converted a free. Early Dublin efforts skimmed wide of the post but they opened their account for 2021 with a Sinead Aherne free after Niamh Hetherton was fouled.

As Dublin upped the intensity, Tyrell proved her worth hitting four first-half points. The first was a beautiful long range exchange cross field with Niamh Hetherton and Tyrell was again on the scoresheet twice more minutes later.

Aherne converted her second free from 30 yards before Lyndsey Davey opened up a six-point gap when she found the net after a sweeping team move involved Hetherton and Siobhan Killeen.

Hetherton’s first-half efforts were rewarded with with a point of her own, while returning Killeen and Tyrell also pointed leaving nine points between the teams at the water break, 1-8 to 0-2.

Making her senior debut, Abby Shiels was comfortable in goals while Orlagh Nolan and Leah Caffrey bolstered a Dublin defence that proved difficult to break.

Dublin’s second goal began as a sweeping team move down field and with Aherne in an inch of space, the captain offloaded to Hetherton, the Clontarf player made no mistake finishing to the net to open up a 12-point lead.

Waterford steadied their ship and Eimear Fennell (2) and Delahunty brought the Munster side back into contention. The teams traded scores before the break, with Aileen Wall finding space and Delahunty firing over from short range. However, a brace of Aherne frees ensured Dublin took a nine-point lead into half time, 2-10 to 0-7.

The third quarter was a tighter affair, although Dublin did have to cope with two separate yellow cards, Aoife Kane just before half-time and Caoimhe O’Connor before the second water break but it had little impact on the champions.

Aherne raised a green flag of her own when Hetherton found her in space and as the substitutions rolled in, the scoreboard continued to tick over. Aherne (3) and Tyrell raised white flags while Delahunty and Kellyann Hogan converted for Waterford.

The game finished in a goal frenzy with five goals inside eight minutes. Orlagh Nolan and Tyrell found the net for Dublin inside a minute, Aileen Wall and substitute Kate McGrath raised green flags for the visitors. Caoimhe O’Connor signed off on the win for Dublin when she converted from the penalty spot.