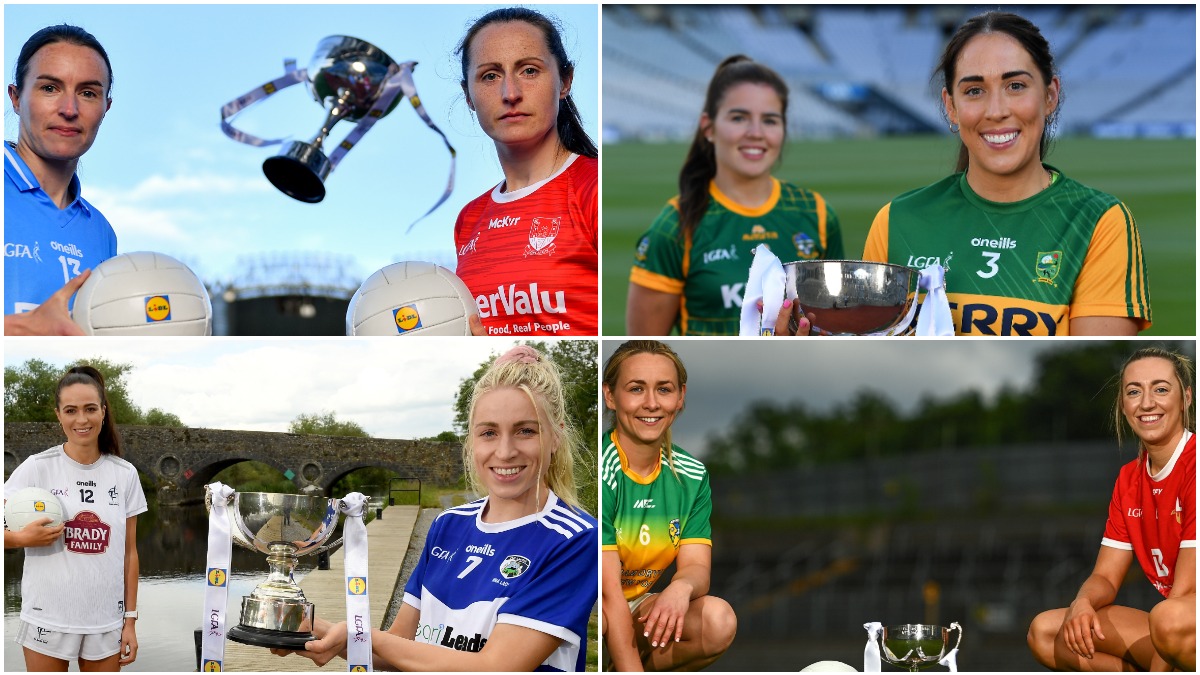 THE captains from the eight participating counties have their sights firmly focused on the 2021 Lidl Ladies National Football League Finals.

The Division 1 and 2 Finals will form the basis of a Government-approved test event for spectators at Croke Park next Saturday, June 26, with three of the competing teams set for quickfire returns to the famous venue.

Cork, Dublin and Meath were all present at Croke Park on December 20 last for the TG4 All-Ireland Senior and Intermediate Finals – with Dublin (Senior) and Meath (Intermediate) taking home the silverware on offer.

On Sunday, attention switches to the Finals in Divisions 3 and 4, with both of these games set to be streamed live on the Spórt TG4 YouTube Page.

In Baltinglass at 4pm, neighbours Laois and Kildare lock horns in the Division 3 decider, while Leitrim and Louth will battle it out for Division 4 honours at St Tiernach’s Park, Clones, with a 2pm throw-in time.

With local bragging rights at stake, Grace Clifford (Kildare) and Laura Nerney (Laois) met on border between the two neighbouring counties, by the banks of the River Barrow.

In the Division 1 Final, Cork are aiming to retain the title they won in 2019 (the Lidl National Leagues were not completed in 2020 due to the Covid-19 pandemic).

The Leesiders are competition specialists – winners on 12 occasions and appearing in the Division 1 Final for the 15th time since 2004.

Dublin, meanwhile, are chasing just a second Lidl NFL Division 1 title, as they look forward to a third final appearance.

The Sky Blues lost to Cork in the 2014 Final but beat Mayo in 2018 to finally land the top League honours.

When Cork and Dublin met in the group stages of the League at the end of May, visitors Dublin prevailed by just a single point, and Mick Bohan’s charges also won the 2020 TG4 All-Ireland Final meeting between the counties.

In the Division 2 Final, silverware and promotion are on offer, as both teams aim for top flight status in 2022.

Meath enjoyed a famous day at Croke Park when they defeated Westmeath in the 2020 TG4 All-Ireland Intermediate Final and after claiming promotion from Division 3 in 2019, winning the Division 2 crown would represent another significant step forward for the Royal County.

Opponents Kerry, who won by six points against Meath in the group stages, were relegated from Division 1 in 2018, but are now just 60 minutes away from a potential return to the top tier.

There’s are also repeat meeting from the group stages in the Divisions 3 and 4 Finals, where Laois and Louth will be looking to turn the tables on Kildare and Leitrim respectively and gain promotion into the bargain.

Laois edged out Kildare by three points in Portlaoise in May, while Leitrim were eight-point winners over Louth on the same day.

Looking ahead to four intriguing games, Mícheál Naughton, President of the Ladies Gaelic Football Association, said: “Unfortunately, we could not conclude our Lidl National League competitions in 2020 but it’s wonderful to be in a position where we are about to hand over four pieces of silverware to the Lidl National League winners.

“Since the commencement of our 2021 Lidl National Leagues, we have witnessed some brilliant football and we’ve been privileged to view it all either on TG4 or via our live-streaming service, in association with Lidl.

“We’re all set for four great games and it’s heartening to be in a position to welcome spectators to the three Final venues – Croke Park, Baltinglass and St Tiernach’s Park.

“I wish to pay tribute to National League competition sponsors, Lidl, who are also our official retail partner.

“Since coming on board with us in 2016, Lidl have helped to elevate our game to new heights, and they provided significant investment which enabled us to live-stream 50 games during the 2021 Lidl National Leagues.

“This is #SeriousSupport for Ladies Football and yet another example of why this partnership has evolved and blossomed.”

“With 209 stores nationwide, we are part of communities all over Ireland and we are committed to supporting the organisation from the grassroots right up to county level and our sponsorship of the Lidl National Football Leagues.

“I want to wish all the teams taking part in the finals the very best of luck. It’s a huge achievement to get this far in the competition, particularly given how difficult a start to the year it has been for everyone. We look forward to the many better days ahead, starting this weekend.”