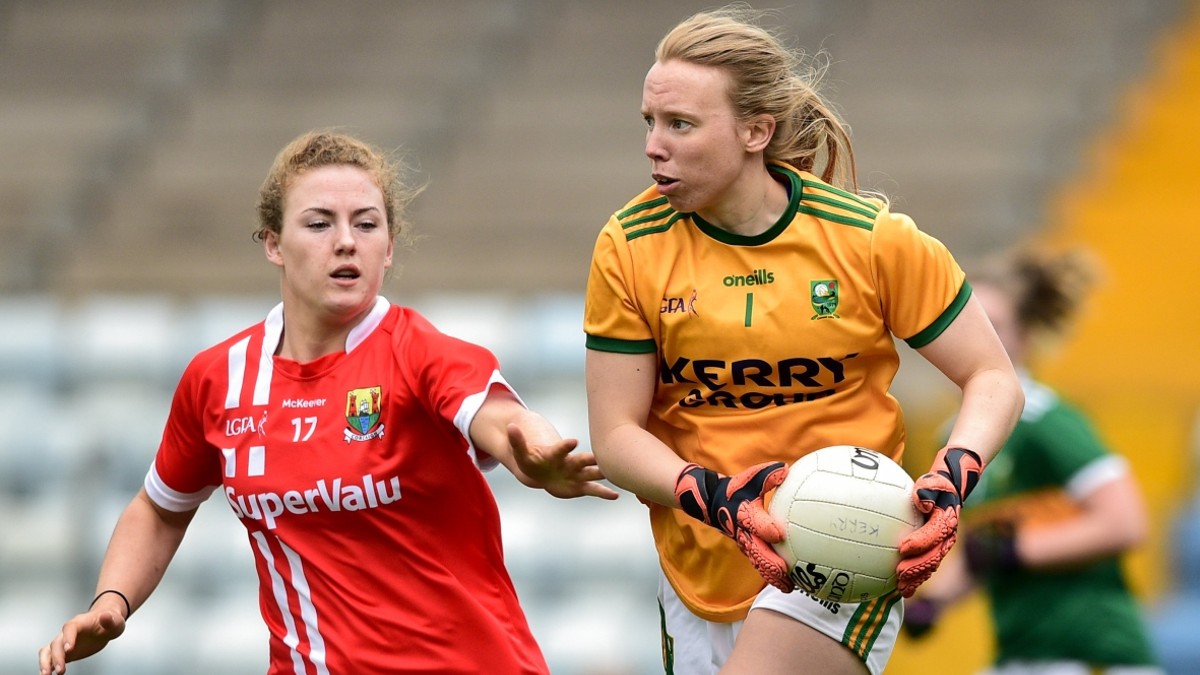 By DARAGH SMALL (Laura Fitzgerald of Kerry in action against Lisa Crowley of Cork during the TG4 Munster Ladies Football Senior Championship match between Cork and Kerry at Páirc Ui Rinn in Cork. Photo by Matt Browne/Sportsfile)

Laura Fitzgerald is fascinated by airplanes. She loves the maths, engineering and technology involved in getting an Airbus A380 to 38,000ft for up to 14 hours.

She’d love to sit in the cockpit and drive an airplane around a runway but she’s not so sure about flying it.

The Kerry goalkeeper, who is an aeronautical engineer studying a PhD in aircraft stability at UL, has a fear of flying!

Whether it’s the occasional row with a flight attendant or even a trip to the cockpit to question a pilot, Fitzgerald has had her moments.

But the 28-year-old won’t let her phobia detract from her first love. And the Irish Research Council Postgraduate of Ireland Scholarship allows her indulge in the incredible feat of getting a giant machine from land to air and keeping it there, even in the most adverse weather conditions.

“I remember in fourth year in college, it was a dark evening, and we were in class and my lecturer was describing this thing and I can still see the page in the book,” said Fitzgerald.

At the time, Prof Michael McCarthy was explaining aircraft stability derivatives to his students in their lecture hall at UL.

The aircraft stability and control module is generally one of the most complex and difficult to comprehend but with the aid of her brilliant lecturer, Fitzgerald knew this is where her future lay.

“They basically describe how the plane responds in flight, the whole dynamics of it,” said the Na Gaeil club player.

“We were in class one day and he was saying about this stability derivative. If you are flying into a runway, and there is a crosswind, the aircraft will fly at an angle. It doesn’t fly in line with the runway, it will fly at 30 degrees and will side-slip and at the last minute they will hit the rudder to the fin on the plane and it will return.

Fitzgerald recalls her first real memory flying when she was four. She went on a ‘jumbo jet’, possibly a Boeing 747, from Shannon to Florida, and vividly remembers looking out over the wings in wonder.

But over the years that turned to a more nervous edge every time she boarded a flight. Pre-Covid, she was on an airplane every few weeks for three or four months but the long wait since has heightened her sense of anxiety.

And through sweaty palms, she remembers some of her worst experiences flying across the globe. Logic only gets you so far and she explains how knowledge can be a dangerous thing too.

“When we were in sixth year, we went on a Leaving Cert holiday,” said Fitzgerald.

“They split us up on the aircraft and I ended up at the front on my own, sitting opposite the flight attendant. If you are on aircraft and there is a crash, the front of the plane is where you don’t want to be. The cockpit breaks off, the main body stays together and it breaks over the wings.

“Where I was sitting was prime breaking off point. I argued with the air hostesses. They wouldn’t let me move, they said you are fine. There was plenty of space and then they said where you are now is going to affect the balance of the aircraft.

“I said hold on now, I am 65kg, the plane is several hundred tonnes. That is not going to affect it. They said sit down or get off. That was probably the first time I was really anxious.

“I was on my own. I was very anxious and, like that, at the front of the plane as well you feel every bump a whole lot more.”

Fitzgerald describes herself as a bad passenger to sit beside and when she does let it overwhelm her, she will often start spouting off facts about airplanes and the mechanisms of flying to her friends or whoever ends up next to her.

In recent years, she has learned to deal with her fear a bit more, making the trip to Perth in Australia with the help of Xanax. But it hasn’t completely ruled out the possibility of a difficult flight every now and again.

“We were flying into London for a soccer tournament and the rest of the team had gone over ahead of me because I had my Masters thesis due. We were flying from Dublin Airport and it was a very, very stormy December morning,” said Fitzgerald.

“Technically, beforehand, a pilot will do a pre-flight check. They will check the major parts, the tyres and wings for any obvious signs. Most people don’t realise an aircraft can actually fly with a certain amount of damage.

“But on the airplane, where the wings attach, there is the wing root and it’s structurally the most important part of the plane. The type of plane I was on, the Boeing 737, they have a known issue of having to have this part of the aircraft repaired.

“You hear about this when you are on work placement so you know in your head the wing root has issues on this plane. At six o’clock in the morning, you are sleep deprived, the plane is rocking from side to side and you see two pilots standing underneath it with flashlights arguing about the wing root.

“But I got on anyway, sat down, the lights are all on and everyone is walking around. All of a sudden, it went woosh, and the power goes on the plane. We’re like, okay. You are there rocking back and forth in the dark and the power comes back up again.

“At this stage now I am starting to shake. I said ‘look you will be grand’, they are not going to put you and themselves in danger but again the power cuts out. I was like, ‘no, can’t do this.’

“I’m asthmatic so I had my inhaler with me. I went to the flight attendant and I was like, look I am having an asthma attack, I need to get off this plane. She was like no, no.

“I told her I was an aeronautical engineer, I know stuff. She was like, would it help if you talked to the pilot? So they brought me into the cockpit anyway.

“And they were really lovely. They were like, it’s just the navigation system, we are having an issue with it switching on. They were going through the technicalities. I said I understand that, they said ‘are you happy’ and I said ‘yeah’.

“Then they said have you any questions, and I was like, what about the wing root? They looked at each other and were like, ‘if you are not comfortable flying maybe you should get off the plane’.

“Off I got and walked the opposite way against everyone in Dublin airport.”

The plane, of course, took off and landed safely.