FOOTBALL: Football in her blood – The Big Interview with Armagh’s Lauren McConville 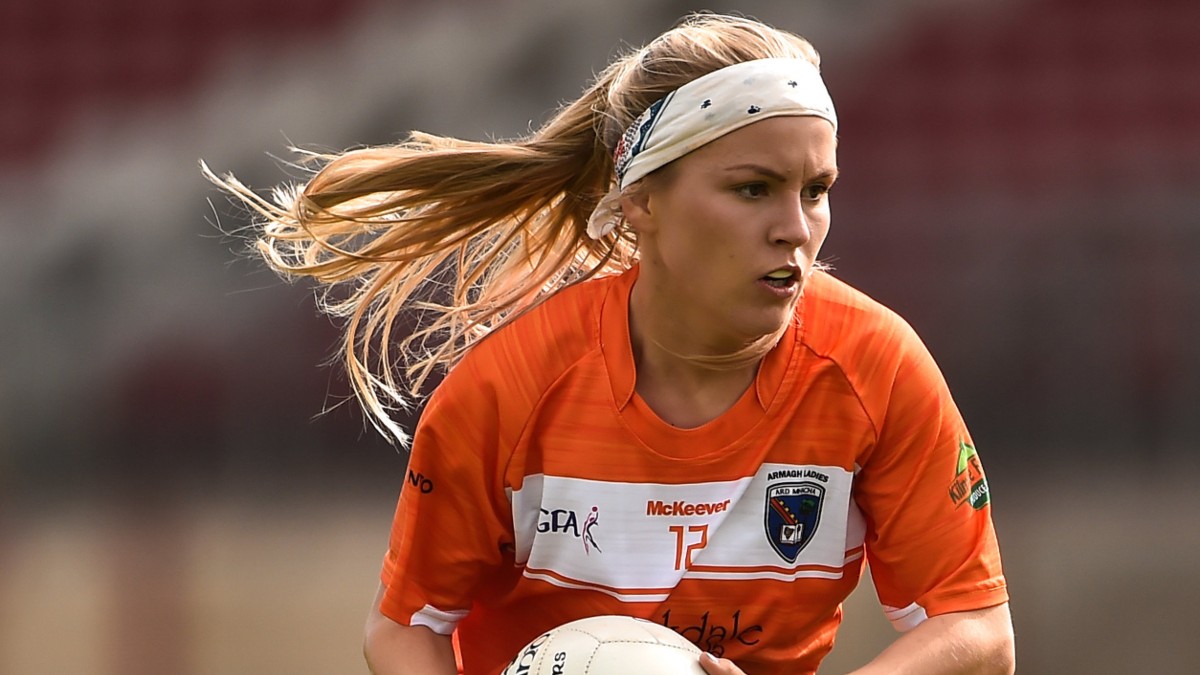 By DARAGH SMALL (Lauren McConville in action for Armagh. Photo by Oliver McVeigh/Sportsfile)

Lauren McConville was in the Lower Hogan Stand cheering on her uncle as he scored 1-2 and picked up the man of the match as Armagh captured the All-Ireland football title for the first and only time in September 2002.

The game against Kerry, with Oisin McConville’s goal the decisive score, was won by Armagh by 1-12 to 0-14 and the match and its aftermath left an indelible mark on excited eight-year-old Lauren, who was determined from then on to make her own mark.

“That win was extra special. I think I was eight at the time but I still appreciated it as much as everyone else in Croke Park that day,” says Lauren.

“It was unbelievable. I have never seen so many people as happy in one place. I even remember the scenes in the local towns afterwards. It meant so much to everyone.

“The streets of Crossmaglen were filled when we got home that night, it was like a sea of orange.

“Oisin has been an inspiration to me growing up as well. It was just incredible when they were able to win the All-Ireland.”

In March 1997, Jim McConville became the first captain to lift the Andy Merrigan Cup wearing the famous black and amber — he is Lauren’s father.
She also has a couple of cousins in the current Orchard County men’s set-up, with Rian and Oisin O’Neill flying the flag.

And with Crossmaglen blood flowing through her veins, she was always likely to find her way into the Ladies football ranks.

“It was inevitable that I was going to play football,” Lauren smiles.

“I grew up watching my dad’s games. I would literally have them on replay in the video player from a young age. I always loved it. When I turned six, my dad took me to underage training with the boys. From there, I never looked back. I played since, I loved it.

“My dad was into football and my mum, Michelle, was a great camogie player as well. I was growing up around the Gaelic Games. My granny would have been really involved in the local club as well. I was always around that Gaelic Games community and I loved it.

“I was kicking football in the back garden. And as soon as I was let go to training, it was probably the best day ever for me.”

Crossmaglen Rangers are now steeped in football folklore, with six All-Ireland crowns to their name, but their much-storied past still looms large.

The British Army occupied part of the Crossmaglen club grounds during the Troubles, and although that is just a police barracks today, it still casts a shadow across the venue.

For McConville, she never had first-hand experience of the worst period in the South Armagh club’s past but is well aware of what happened and understands why people need to move on, but without forgetting, too.

“That would only be a vague memory in my mind, fortunately enough,” said McConville.

“It is nice to see that we are starting to move on from that, however difficult that is. There were years of very poor things and the barracks was an unsightly thing, sitting looking over your football pitches.

“It still is there but it has filtered out, the sort of anger back through the generations. My own family would have had their fair share of experiences with it too.

“From both sides, everyone has moved on from it. They have made great steps. They have taken down some of the larger parts of the barracks. And there has recently been news that the rest of the police station will be taken down from there.

“That is all part of moving on from this and getting away from the past. When people see that, it brings back memories that they don’t want. Fortunately, I don’t have such memories because it was when I was so young.

“Nothing like that was going to stop our GAA community and our club, that only added to the passion. If there is any sort of barrier in the way, we were able to overcome it.

“The fact that we were able to have so much success as a club over the years, it is symbolic of how resilient we are and how much it does mean to us.”

McConville is now a star player for Armagh, leading the way last weekend as they chalked up an impressive win over Ulster rivals Cavan and advanced to the quarter-finals of the TG4 All-Ireland Senior Championship.

The 26-year-old defender made her inter-county debut in 2014, and she has been part of an Ulster winning Armagh side, along with securing Division 3 and Division 2 Lidl National Football League titles.

She still had time for an 18-month working holiday to Australia between November 2018 and May 2020. But even when she was there, she was playing with the Michael Cusack’s club.

She has also worn Cavan colours, as she played for the Cavan club in New York while on her J1.

But now the focus is Armagh and getting the better of Mayo to secure top spot in Group 1 with a win today in Ballinamore.

“We are going rightly now, our League campaign didn’t really go as planned. So, it gave us a bit of an opportunity to refocus and gauge towards championship,” said McConville.

“We are happy, we have got good momentum going at the minute. We are just taking it each game as it comes but we are happy with how it has been going so far.

“Cavan was a massive win. Now, both us and Mayo will be looking to finish top of the group. We have played Monaghan and Cavan in the league and it actually will be a good test for us playing someone we haven’t played so far this season.

“We are really looking forward to it. It should be a tough game but hopefully we can get over the line.

“Mayo have been there or thereabouts for the last number of years. We know that if we want to be able to compete in this competition we need to be up there with the likes of those teams.

“That is what we are aiming for.”