FOOTBALL: “For me, the Ascot win was like my All-Ireland win, I was delighted” – Kildare footballer Lauren Murtagh 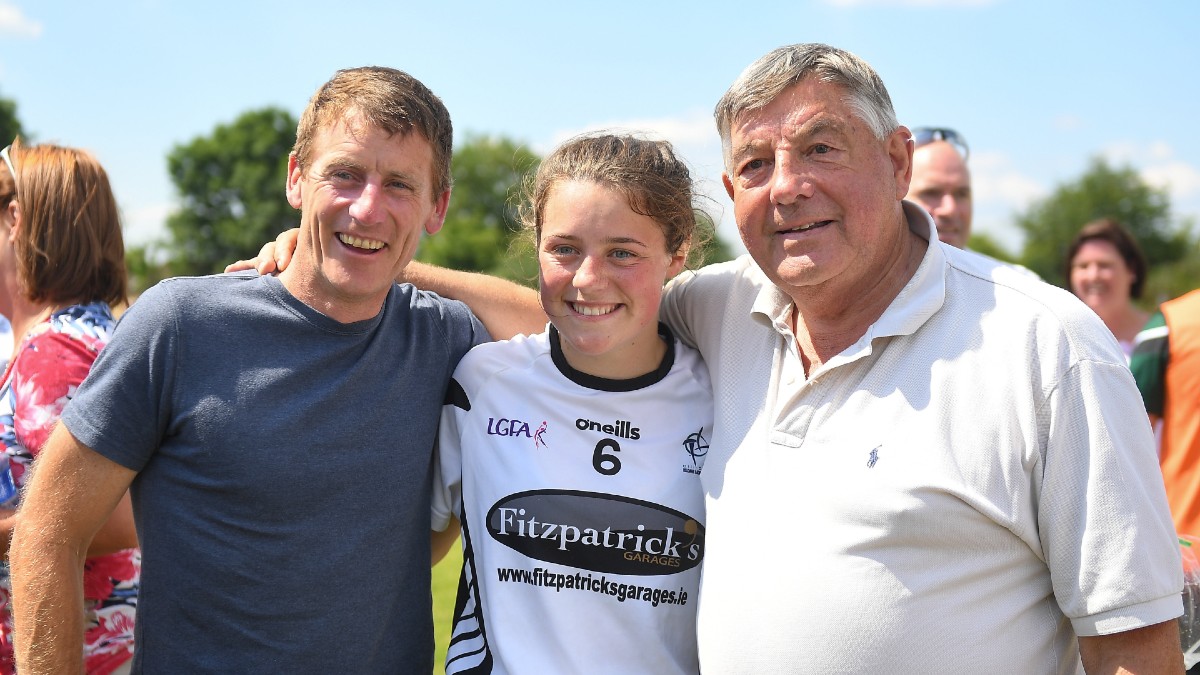 By KEVIN EGAN  (Former champion jockey Johnny Murtagh with his daughter Lauren and his father-in-law, Tipperary’s Michael ‘Babs’ Keating, after Kildare’s win over Waterford in the All-Ireland Minor B Ladies Football semi-final match in 2018 at McDonagh Park in Nenagh, Tipperary. Photo: Harry Murphy/Sportsfile)

Her dad is one of Ireland’s top jockeys and her grandfather an All-Ireland winning player and manager, but Lauren Murtagh is carving out her own career as a Kildare ladies footballer of some renown.

With an All-Ireland minor medal in the bag, Murtagh is now ready to play a central role in a Kildare side among the leading contenders for the 2021 TG4 All-Ireland Intermediate Championship, which gets underway next weekend.

The 21-year old half-back already has an impressive CV, but still some way to go relative to her father Johnny, who was a five-time Irish champion jockey, or indeed her grandfather, Michael ‘Babs’ Keating, All-Ireland winning player and manager with the Tipperary senior hurlers.

“Sometimes you’re like, ‘I’m Lauren’. I just have to go out and show people I’m not just Johnny’s daughter and I’m going my own way about this, that I want to be known as Lauren the footballer and known for a reason instead of just who is my dad,” Lauren explains.

Already, Kildare LGFA appear to have been very fortunate. Lauren is due to start the final year of her Health and Performance Science degree at UCD in September, and she’s currently working at her father’s yard in Kildare, riding out horses. One of the horses in her charge is Sandringham Stakes winner Create Belief, who recently became her father’s first winner at Royal Ascot as a trainer. A career as a jockey would have appealed to many, but Lauren was always drawn to football first.

“I did pony club when I was younger and even living on The Curragh, I would always pack out a horse so it was always something I did. But then when I was on the minor team and I was doing the Leaving Cert, I had to pick ponies or football, and that was actually the year (2018) we won the All-Ireland so the decision was right,” she said.

“That’s when I knew, no I really want to do this. I just really loved that All-Ireland win. Now I’m in the yard and I love it and everyone’s slagging me saying ‘oh when are you getting the licence?’ but I don’t know if I’d ever consider it.

“I’d never have thought ‘Oh I want to be a jockey’. I think it’s more of a bug. Even when dad asked me to ride out when I was younger, I was saying ‘not a hope’, they are too fast but now I just love the speed, I love it.”

Rather than travel to Ascot with Create Belief, Lauren chose to stay home, concerned that any potential contact with Covid might lead to her missing Kildare’s Lidl National League Division 3 Final against Laois last weekend.

That didn’t stop her feeling the elation of Create Belief’s win every bit as much as if she’d been there.

“For me, the Ascot win was like my All-Ireland win, I was delighted.”

“When you are in football you can’t go out, you have to be fully committed. That year I gave everything. I was in boarding school at Ursuline in Thurles. We had training on Wednesdays and I’d leave after last class, get the train home, mam would collect me and bring me straight to training, pick me up, bring me back to Thurles. I’d say it would be about 10 o’clock by the time I got back. After that (2018) win, it felt like everything had paid off. It was amazing.

“With Create Belief, or any horse, it’s the same. You do all the work at home and you are just hoping it’s done and then when they pass the line first, it’s like ‘we did it’.

“That was a big step for dad and everyone here. It’s a great team to be a part of, and I’m very competitive as well so it’s part of that side of me!”

Murtagh makes frequent reference to how important that All-Ireland minor title, secured at Hogan Park in Moate with a win over Roscommon three years ago this month, was to her group. It was also hugely important to the county.

The team that won the All-Ireland intermediate title in 2016 was breaking up fast, to the point that now, just five years later, only a few of them still pull on the county jersey.

Murtagh, like many of her colleagues, was fast-tracked into the senior panel and after some difficult days in their first year, they hit the ground running in 2020. Five wins in five league games had them in pole position for promotion, before Covid intervened and denied them the chance to go up to Division Two. This year, a one-point defeat to Laois means they’ve still to earn their way out of the third tier. Yet as this group keeps progressing, the breakthrough seems inevitable.

“In 2018 we all bonded. Everyone just wanted to stay together. That feeling of winning, it was the best feeling I’ve ever had playing football. The girls just wanted to continue. We were so lucky that so many didn’t drop out and didn’t go their own way. Our Kildare team is very young but they are very experienced young girls. In a few years, I feel like that will benefit us so well,” she said.

“I feel like we should have won (against Laois) anyway. Everyone was in the right mindset, buzzing for it, especially after beating Sligo so well. I don’t know did we give them too much space, maybe we should have ran at them more, maybe it was nerves.

“I think what’s sickening even more is to know that we shouldn’t have been in the situation in the first place, when you consider where we were in 2020. But it is what it is. We can’t go back to last year. We have to move on and go for championship now.”

Galway native Daniel Moynihan will continue to oversee the Lilywhites in what is his fourth year at the helm, but when it comes to Lauren Murtagh, his coaching will only be carrying on the work that goes on at home.

Aside from her father’s exploits on the world’s leading racecourses, he was also a promising young boxer and soccer player, not to mention taking on the role of club manager with Milltown, meaning he was managing and coaching Lauren for a while. Then, grandad is there to weigh in as well! Babs Keating, aside from his hurling exploits, was also an accomplished footballer who played several years for Tipperary.

“Babs after every match would just sit me down and go ‘what did you think of that’? He’d give me a little match report he had filled out from my match.

“Even now he might get the ball out of the bag and he would tell me to solo up there with the head up. ‘Do not look down at the ball’, he would say. I’m so glad to have him. He knows the game well and he has a few All-Irelands under the belt so it’s good to get advice off him.

“When you’re making your own name in sport, those who have gone before you might raise the bar a little, but they can help you to clear it too.”