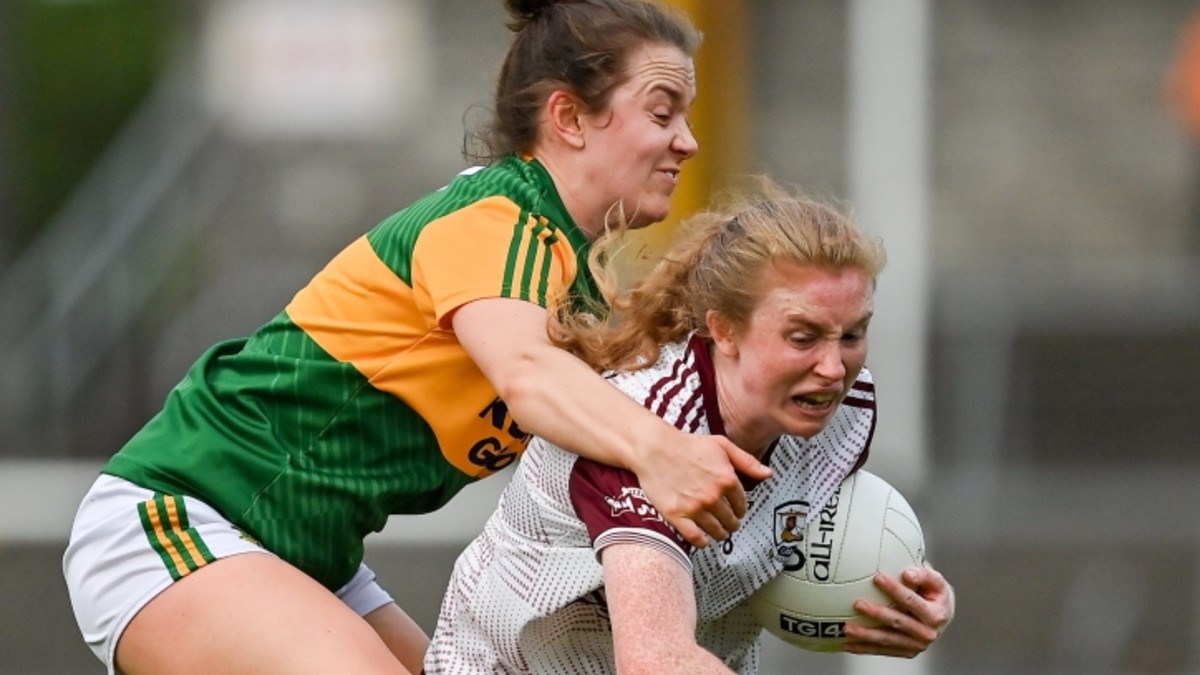 By Tomás Keating (Louise Ward of Galway in action against Anna Galvin of Kerry during the TG4 Ladies Football All-Ireland Championship Group 4 Round 1 match between Galway and Kerry at Cusack Park in Ennis, Clare. Photo by Brendan Moran/Sportsfile)

Galway held on for victory in the opening TG4 All-Ireland Senior Championship game of the summer despite Louise Ní Mhuircheartaigh’s goal in the final minute at Cusack Park.

The Kerry forward had gotten her side off to a flying start with an early goal, and at one stage in the first half Kerry led by five points, but Megan Glynn’s goal for Galway just before half time resurrected their challenge.

The Connacht side dominated after the resumption and they looked destined for a routine win when substitute Ailish Morrissey hit a brilliant goal after 43 minutes.

But led by Ní Mhuircheartaigh, Kerry rallied and she followed her point two minutes from time with a brilliant second goal, only for time to run out and Galway claimed the opening day honours.

It was Galway that drew first blood after 30 seconds as Olivia Divilly pointed a free, but Kerry replied not long after with a well worked score from former Ireland rugby international Louise Galvin.

Ní Mhuircheartaigh helped Kerry to keep Galway at bay until Glynn struck her stylish goal just before half-time, to leave it 1-7 to 1-5 in favour of the Munster side at the interval.

Upon the resumption, Galway raced out of the blocks as Kate Slevin, Divilly (free) and Glynn all struck scores as Gerry Fahy’s side edge as point in front.

Then on the 44th minute, Morrissey, who was only on the pitch a minute, went by two Kerry defenders and rocketed it into the left top corner, which put Galway 2-9 to 1-7 in front.

Ní Mhuircheartaigh swung over a much needed free for Kerry, but Slevin replied to keep Galway five clear, until Lorraine Scanlon and Ní Mhuircheartaigh pointed to cut the deficit to three points. Sub Róisín Leonard returned from her injury absence to kick a fine score off the bench, and despite the late comeback Ní Mhuircheartaigh’s goal proved insufficient for Kerry.