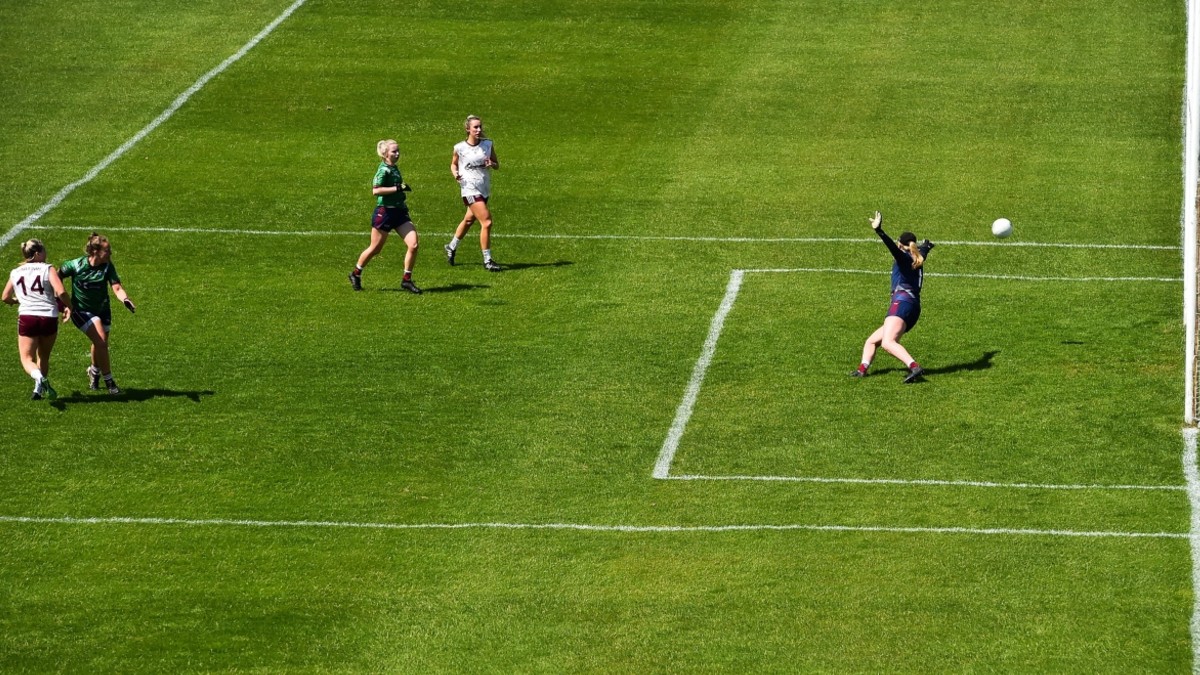 (Andrea Trill of Galway, 14, scores one of her four goals during the Lidl Ladies National Football League Division 1A Round 2 match between Galway and Westmeath at Pearse Stadium in Galway. Photo by Eóin Noonan/Sportsfile)

Trill was in lethal form as she netted a total of four goals in a stellar attacking performance.

It was the Claregalway trio of Trill, Kate Slevin and Megan Glynn, who did the majority of the damage in the opening half. Gerry Fahy’s side led 2-0 to 0-0 after three minutes, courtesy of two brilliant goals from Trill, whose second was created by a great run from Emma Reaney.

Slevin stroked over two frees to add to Galway’s advantage until Anna Jones found herself all alone on the edge of the square, and she calmly finished past ‘keeper Dearbhla Gower.

However, Galway were in no mood for a comeback as moments later Trill made a searing run, and unselfishly laid it off to her club-mate Glynn, who goaled.

Galway were in complete control for the remainder of the half with Slevin (two), Mairéad Seoighe and Olivia Divilly all tagging on fine scores, as the Tribeswomen led 3-6 to 1-1 at the interval, with Westmeath’s only point coming from a Sarah Dillon free.

Westmeath began the second half brightly as Leona Archibold knocked over a free but Slevin kicked a beauty in response. In the 35th minute, Trill completed her hat-trick, and two minutes later Nicola Ward got on the end of a fantastic team-move to rattle the net as Galway now led 5-7 to 1-2.

Seoighe and substitute Sarah Conneally kicked scores, while Archibold sent over another free.

But the day belonged to Trill, who rocketed the ball into the left top corner to claim her fourth goal. A minute later, Lucy McCartan raised a green flag for Seán Finnegan’s team but there was no chance of a comeback.

Both management teams will be happy with how their sides finished the game as Galway’s bench finished strong with subs Ailish Morrissey (two), Ellen Power and Mairéad Ní Loingsigh all impacting the scoresheet, while Westmeath’s subs Jo-hanna Maher and Sinéad Murtagh registered points down the home stretch.