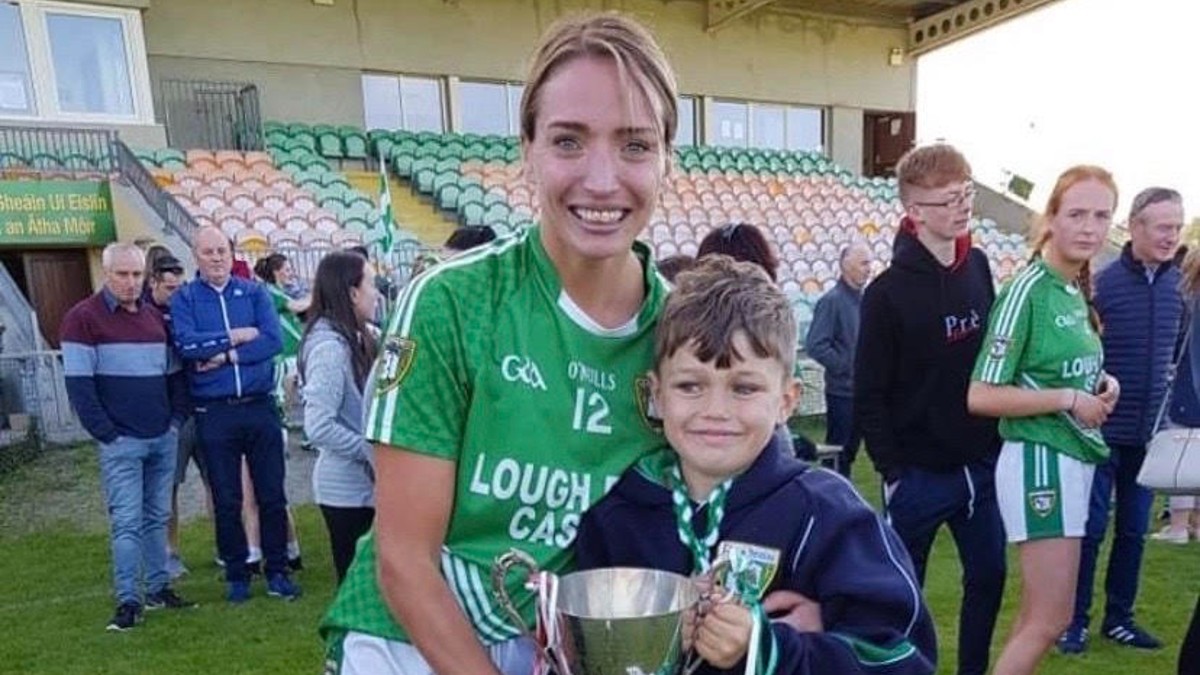 Charlene Tyrrell will usually run between 70 and 100km each week, while last month she ran 504km for charity. In January, she aims to hit 310km for another worthy cause.

The Leitrim midfielder still has plenty of life left in her legs and despite joining the adult team almost 20 years ago, the oldest player on the current panel hasn’t even contemplated retirement yet, at 35.

“Now before I hang up my boots, people are like: ‘Charlene you could be playing until you are 40 to win another All-Ireland.’ But if that’s what I have to do, I will do it,” said Tyrrell.

The Mohill native claimed League and All-Ireland titles early on in the green and gold but she has also taken an extended break away from the game.

Her hiatus between 2010 to 2018 only helped to fuel her fire and left her hungrier than ever when she returned to Leitrim from Shrewsbury.

“I went away for a summer and never came home,” said Tyrrell.

“Then I had my son. Noah and I moved home three years ago and that’s when I got back into playing football. I didn’t kick a ball at all for eight years, it’s crazy.

“I get a lot of support from my family now. Noah comes to the odd training session and game. I manage quite well but if you want to do something enough, you will probably do it.

“Noah grew up in the UK and where I lived there were no Gaelic Games so he didn’t grow up in this environment, he thinks we’re all nuts.”

Tyrrell is really into her fitness these days – and works as a Sports Therapist in her mother Lucia’s business. She is also a Personal Trainer and studying Sports Therapy and Rehabilitation in Cavan Institute.

But her introduction to Leitrim LGFA came when she was in her early teens and she entered the underage sections.

She eventually joined up with the adult team and starred in the half-back line in a famous TG4 All-Ireland Intermediate success in 2007, when Leitrim beat Wexford 0-17 to 1-10 at Croke Park.

Tyrrell also played her part as Leitrim were crowned National Football League Division 4 champions with a 2-17 to 2-11 win against Cavan at Breffni Park in 2010.

It was smooth sailing for most of her early Leitrim career but a summer in Shrewsbury turned into almost a decade away from the game. While Tyrrell was away, she qualified as a Personal Trainer and she came home to a Leitrim team in disarray.

It was amazing how much things had regressed in the intervening period, although initially the signs were good as Leitrim were successive winners of the Connacht Intermediate Championship in 2015 and 2016.

They were also All-Ireland quarter-finalists the following year but then came the slide, and they didn’t feature in the Connacht or All-Ireland Intermediate Championship in 2018 after being relegated to the bottom tier of the NFL on the back of five walkovers.

“I wasn’t at home and it is mad to go from being so into football to not having a clue what was going on,” said Tyrrell.

“I don’t know if there was an argument and they couldn’t form a county board. No one could take on the county team, so there was no actual Leitrim ladies team for one year. They didn’t have a team competing, it got that bad.

“The year I came home, there was an emergency meeting held to get a manager to take the girls on. Brian Mulvey stepped up at the time. He is still involved on the management team.

“They got the ball rolling and Hugh Donnelly was brought in after that. I didn’t play that year and the girls managed to stay up. But things got quite bad a few years ago.

“It’s good to get back to being competitive in competitions. We would be going into the National League in our division being favourites to come out of it and get promoted. To think where we were a few years ago to where we are now, it’s great.

“It’s mad that we won in 2007, I don’t think I played in 2008 but I came back. In the National League we got promoted to Division 3 and the next year it nearly all fell to crap. We went straight back down to Division 4. To be winning trophies and for it all to just dramatically fall apart is just mad.

“But it makes me cherish the big days because I know how hard they are to come by. It was just another day back then. You don’t savour the occasion. When I think back now, oh my God, what an opportunity. I let the day pass me by, I don’t have great memories from it.”

But Tyrrell is part of a rising tide in Leitrim ladies football and they only fell to a four-point defeat to Louth in last June’s Lidl NFL Division 4 final at St Tiernach’s Park in Clones.

And although it was the same agonising margin when Leitrim lost to Kildare in the TG4 All-Ireland Intermediate quarter-final six weeks later, their veteran midfielder hasn’t lost faith in the project.

A few weeks after Leitrim’s exit, Tyrrell began her charity run for the Rapunzel Foundation. In dedication to her friend Keeva Murphy, she racked up the kilometres to help fund wigs for young people with alopecia.

“I would have gone to the gym a lot and I do a lot of running but I don’t enter competitive races,” said Tyrrell.

“Recently when I had a break from football, I did a fundraiser for a family friend. I ran the dates of the month of October so on the first I ran 1k, then 2k on the second, 3k on third, right up until the 31st.

“That was my break from football. I would run quite a lot anyway and always have. I have found it grand getting back into the football. I have always been running and I am probably fitter now than I was in my 20s.

“I would happily run every day. If my running can help me raise money to help other people then I would do it.

“I was actually training to do a 50k ultramarathon in May but that got cancelled, much to my manager’s delight. That was around the time we were preparing for the National league final, so he was delighted to hear it was cancelled.”

The 2022 season will soon be up and running and this Leitrim legend is showing no signs of slowing down as she continues to make an impact at so many levels.