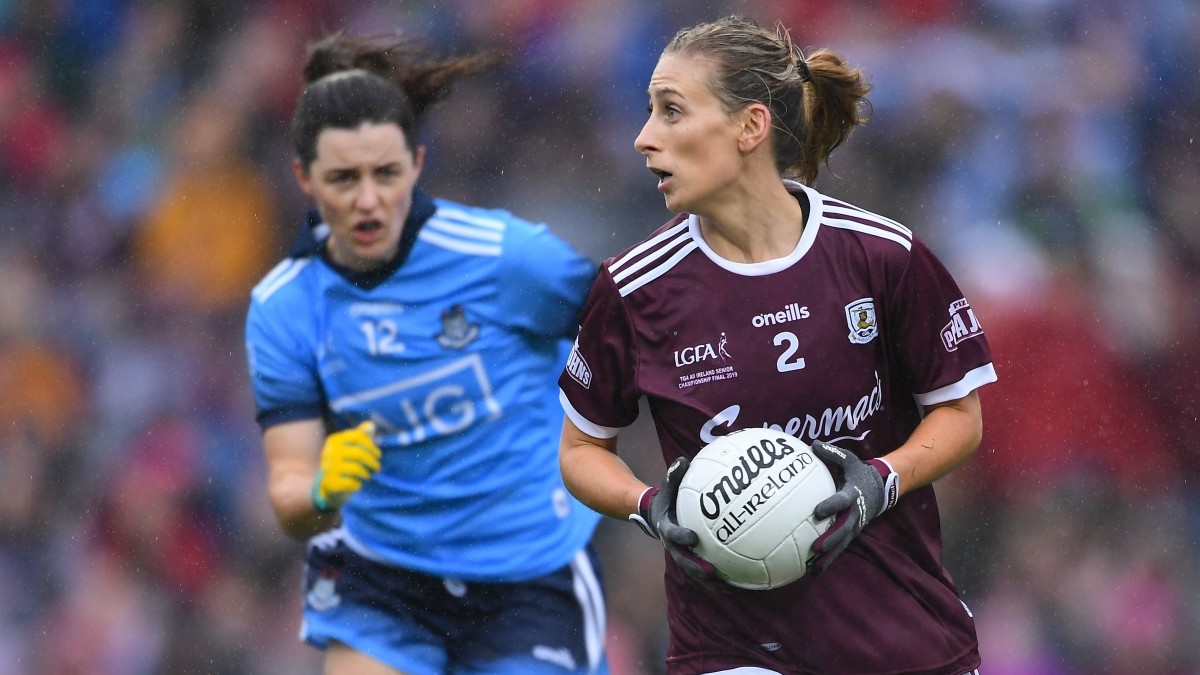 By DARAGH SMALL  *Sinéad Burke of Galway in action against Lyndsey Davey of Dublin during the 2019 TG4 All-Ireland Ladies Football Senior Championship Final match between Dublin and Galway at Croke Park in Dublin. Photo by Piaras Ó Mídheach/Sportsfile”

Sinéad Burke never got to follow in the footsteps of her role model, Niamh Fahey, and lift the Brendan Martin Cup at Croke Park on TG4 All-Ireland Final day.

It was always Burke’s dream to bring the cup back to Killannin, like how current Liverpool Women’s captain Fahey did in 2004, but that opportunity never arose.

Instead, 31-year-old Burke is now living in Armagh and playing with the local Armagh Harps club, with whom she recently captured a second successive county title.

But Galway, whether it’s her native Oughterard, or Killannin, is never too far out of mind.

Burke, a two-time TG4 All Star, doesn’t follow the football cross-channel but her brother, Patrick, is a big Reds fan.

And there’s a local link to the Anfield club in the form of Fahey, who’s proud captain of the women’s team.

Burke and Fahey went to school together at St Paul’s, Oughterard. Burke is two years younger, while they also played together in Killannin and remain great friends to this day.

“I would see her whenever she is home, whenever she gets a minute from all of her soccer over there,” said Burke.

“I would be quite friendly with Lorna Joyce, she is her sister-in-law. We would often catch up over in Lorna’s.

“She is class, all up along she was the one you looked up to, especially when I was underage. “She won the Brendan Martin and brought the cup back to Killannin, and I remember thinking that was just unreal, being able to do what she done would have been class.

“She was definitely one of the role models for me growing up.”

Unfortunately for Burke, having retired from the inter-county set-up in March of this year, she will never get to experience the joys of winning an All-Ireland with Galway.

But she can still take inspiration from the tremendous athlete that Fahey is and apply it to her own endeavours with Armagh Harps today.

“She is such an unbelievable sportsperson,” said Burke.

“She is so modest in what she’s achieved. She is always willing to give advice or help out. She would be the first one to text if there is a big match coming up as well.

“We definitely would have loved her to be on a Galway panel all through the years that I played as well. She would have been such an addition.

“But she was such a good talent in soccer, England came calling, and of course she was going to fulfil that.

“Everyone in Oughterard and Killannin is very proud of her as a sportsperson. It’s great to have her in the area for young girls to look up to as well.”

Burke played underage with the Oughterard boys until U-14 level before she had to either quit or switch to the nearby Killannin.

From there, she went on to play with Galway, while her career as a primary school teacher meant she later hooked up with Ballyboden St Enda’s in Dublin.

She has since moved to Armagh and lives on the Monaghan side of the county, teaching in Scotstown.

And having joined forces with Armagh Harps, she is delighted to have found a way to bed in with the local community.

“It was just the way everything panned out. As a footballer, you would love to continue playing with the girls you have grown up with, the girls you went to school with and the friends in the locality but life moves on,” said Burke.

“With every club I have been a part of, I have been lucky everyone has been so nice and welcoming, just taking me under their wing. Moving to a new place here in Armagh, it has been nice to get to know girls and to make friends in an area you are maybe not so familiar with.

“And that’s the joy of Gaelic Football. No matter where you go, you can find a club and become part of a club. And you feel at home, even though it’s a home away from home, you are still needing friends and you have the same interests.

“Just things like that that have made it so easy for me to transfer to a different place through the means of Gaelic football which is nice.”

And Armagh Harps have been in fine form since Burke’s arrival. Last October, they were crowned county champions for the first time in 22 years when they defeated Carrickcruppen in the final.

On 19 September, Carrickcruppen were put to the sword again as Armagh Harps claimed a 1-13 to 1-7 victory this time around. They will go on to face Antrim champions Moneyglass later this month.

It has been a phenomenal period for the club that boasts Armagh inter-county stars such as captain Kelly Mallon and Fionnuala McKenna.

But Burke’s experience has been vital and even though she has made an instant impact and already claimed two Armagh medals, it’s unlikely there will be a dramatic U-turn on her own Galway career.

“It is never easy closing a door on an inter-county career but I rest easy that I gave all that I could give to Galway over the years,” said Burke.

“I had some great days wearing a Galway jersey and some tough days wearing the jersey too but I am happy with all that I have given and I am content that the younger girls coming through have a great future ahead of them in Galway as well.

“No, I closed that door on the inter-county scene. I am happy enough playing with a great club here in Armagh Harps.”

And having watched so many young Meath players go out and fulfil their dreams on the biggest stage against Dublin last month, Burke knows both Galway and Armagh can take inspiration.

“I was so envious of what Meath portrayed on the day. You can’t help but just look at them in awe and say: ‘wow,” said Burke.

“It gives a bit hope to any team that they can all be beaten. Even though it’s All-Ireland final day, it’s all about how you prepare.

“Just from reading articles, you could see Meath as a unit, they 100 percent believed in themselves. They didn’t buy into this, whole All-Ireland final, big day out thing.

“They just went and got a performance and worked hard. It was unreal to watch.”