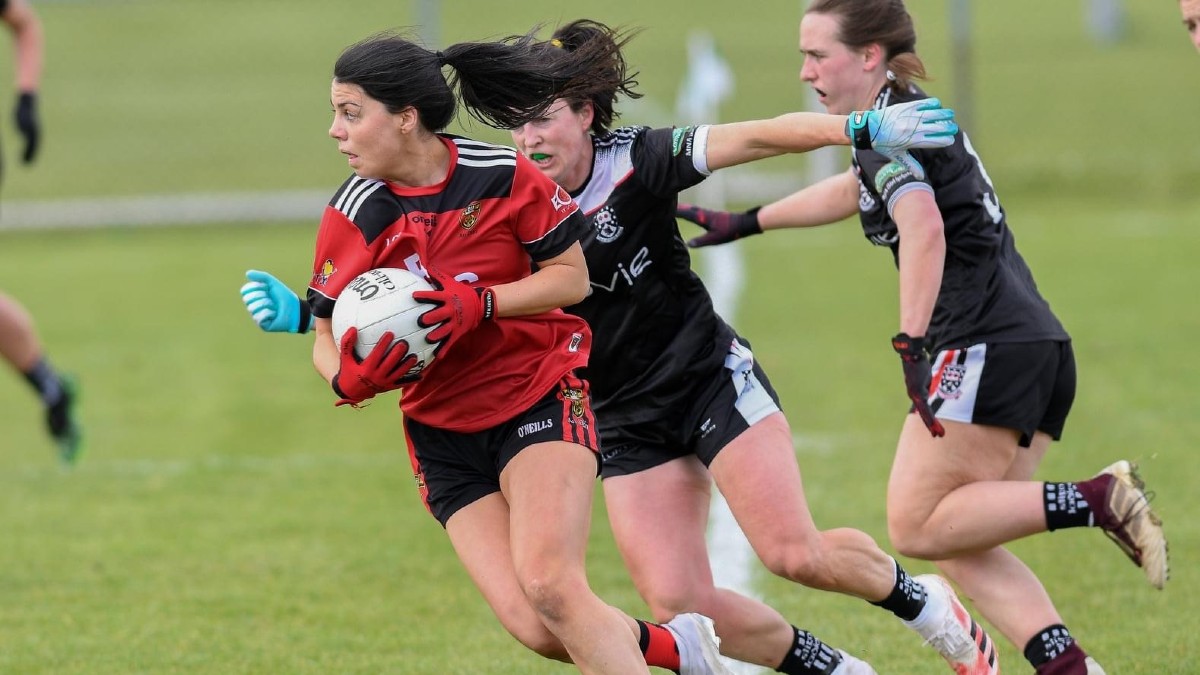 By DARAGH SMALL (Jessica Foy in action for Down against Sligo. Photo (c) Maurice McKey)

When she made history to become the first female professional footballer playing in Northern Ireland, Glentoran captain Jessica Foy made sure to get one special clause included.

Usually when these contracts are drawn up, a professional athlete will be prohibited from playing other sports but the Down star was not going to turn her back on the Mourne County and Ladies football.

“It was in the contract, naturally like any professional contract, about not playing another sport,” said Foy.

“But it was something that we discussed at the time of the contract and they appreciated how important it is for me to play. They said they will accommodate it and work with me as much as they can.

“Obviously if there’s a clash, soccer will take precedence this year, hopefully at the minute it looks like there is the room there that I am still able to play both, thankfully.”

The 26-year-old Carryduff native was a late-comer to soccer, she began her career at Our Lady and St Patrick’s College Knock before she helped them make history when they won the Northern Ireland Schools Cup in 2012.

Foy’s team won 4-3 that day and she scored all four goals, which included two stunning free-kicks. The IFA scouts had already been in touch prior to that and she was in the Glentoran ranks en route to taking the captain’s armband, turning professional and going on to feature for Northern Ireland too.

But Foy had also hit the ground running with Carryduff in the Ladies football ranks; she went on to represent Down at underage and made her senior debut over a decade ago.

There was little doubt that both sports had to be accommodated when she signed on the dotted line in January.

“You think at the time, yeah it might not be that bad if I focus on one but when you sit down, Ladies football is something I’m really passionate about and something that I love,” said Foy.

“I know I am only 26 but there may not be many opportunities to play county football at a high level so it’s an opportunity that I don’t want ever to miss out on.

“And with county football and Down, we have been progressing over the last couple of years. It’s something that I massively want to be a part of, that progression and hopefully to go on and be more successful with Ulster and All-Ireland titles. I’m naturally delighted that we are being accommodated with both sports at the minute.

“And of course it is possible to play both sports. It does take a lot of, I don’t like to say sacrifices because it is something I do enjoy doing, but you do have to make a lot of hard decisions and choices.

With a combination of Glentoran and Down training every evening, Foy gets up at 5.30am so she doesn’t miss out on her workouts in the gym.

Saturday is her only day off while during the week she is also a PE teacher at the Dominican College Fortwilliam in North Belfast.

It makes for a busy week but Foy is determined to make it work and there is a hectic summer around the corner now too. Down will look to build the momentum under Ronan McCartan, while Glentoran are in pre-season.

“I feel very honoured, to be honest, that I was selected as the first professional,” said Foy.

“At the time I hadn’t really thought about it and processed it. Then whenever it got released to the media, I really saw the impact that it actually has had, the amount of people that were reaching out.

“It was all over social media and the news. People were texting and calling me. The messages of support that I received were incredible. It has only started to sink in what a massive achievement that it is – and to be paving the way for women’s sport. It’s definitely something that I am going to be incredibly proud of for years to come.

“My parents are incredibly proud too. At the start they tried to keep me grounded and were like, ah it’s not that big of a deal. But once it got released they were super proud.

“They saw the hard work that goes in and is involved with women’s sport. It’s something we did and gave all of the commitment and we loved it, now we are getting the reward for it as well. It’s fantastic.”

Down finished third in Division 3 North of the Lidl National Football League last year while they unlucky to be knocked out by eventual finalists Wexford in the TG4 All-Ireland Intermediate Championship at the quarter-final stage.

McCartan’s first game in charge will see Down face Roscommon in Division 3A of the Lidl NFL tomorrow. And Foy is excited to get another season underway as Down look to take inspiration from Meath’s fairytale exploits last season.

“Two years ago, I think it was 2020 the year Meath won the intermediate All-Ireland, they only beat us by two points in the group stages of the Championship,” said Foy.

“We knew how close we were and the year before that we actually beat them in the League. So, we were close but we never seemed to have that wee bit extra to get us over the line.

“We will have to take inspiration from Meath in terms of how successful they were from Intermediate to really push on and compete in the senior level.

“It was incredible and it shows that it can be done. The gap is getting smaller, definitely, between senior and intermediate standard, which is fantastic to see. We have to take hope from that and really push on now to start competing.

“We definitely have been building with Down over the last couple of years and we were very unfortunate last year in the quarter-finals of the All-Ireland. It’s nice to get a fresh face in, a new management setup but obviously with that it’s going to take a little bit of time for it to click and to get our new style of play together.

“Last year, we had a very tough game against Roscommon. We’re hopeful that we’ll be able to get a win there but we have to be realistic about it. We know that this is a building process, it might take a year or two for us to get to that point where we are competing for Leagues and All-Irelands.

“Right now, we are focused on growing and building and getting better. We have been in since October.

“It’s a fantastic setup to be a part of and it’s an exciting time for us.”