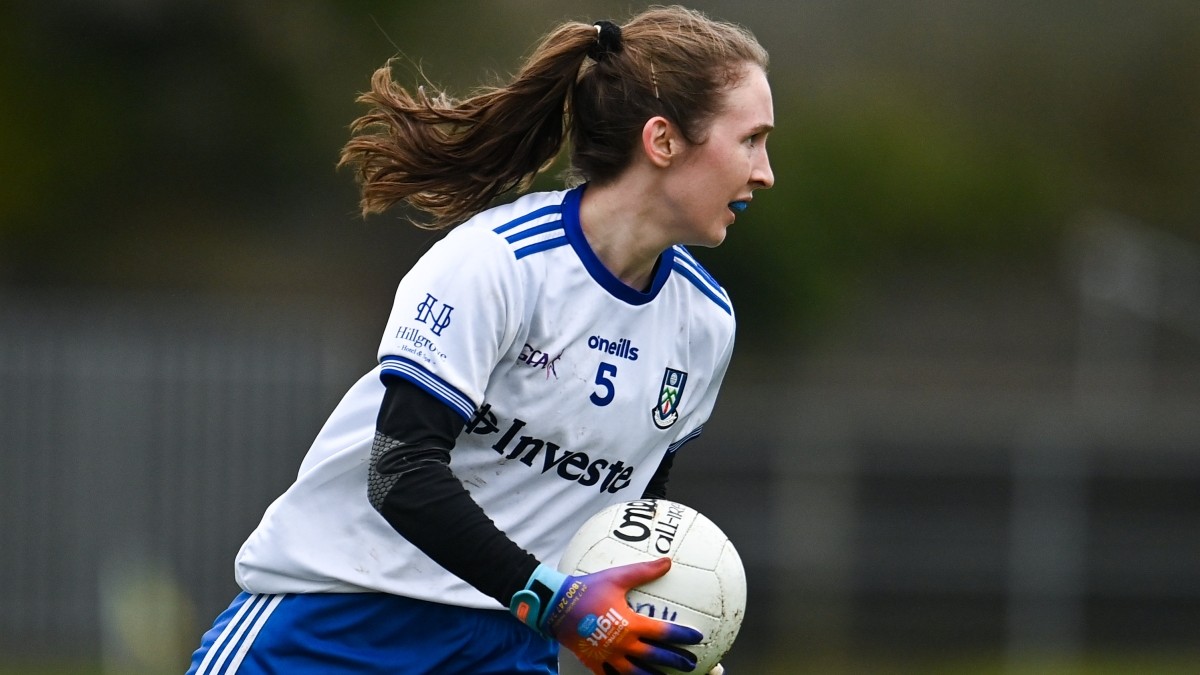 It’s almost ten years since Monaghan’s Rosemary Courtney first stood on the field at Croke Park, but it remains her life’s ambition to graduate from mascot to player on All-Ireland final day.

Rosemary was the fifth of the five Courtney sisters to play for the county and, as Monaghan vice-captain this season, she is desperate to lead her older sister Cora and the rest of the squad back to Croke Park.

Back in 2011, her sister Sharon was captain, Cora was playing midfield, while Joanne was one of the team’s selectors. Heading towards her teenage years, Rosemary had to have her arm twisted to lead out the team that day, but it triggered a driving ambition to represent and win with the county.

“I remember I didn’t want to do it, but Sharon threw me in at the deep end. I was a wee bit nervous, but I did it in the end and I was so glad I did it. That is a great memory to have,” said 23-year-old Rosemary.

“I can’t remember what age I was, but Darren McAnespie – the brother of the twins Ciara and Aoife – was a mascot with me too.

While Sharon, Fiona and Joanne have all called time on their county careers, the entire family continues to play a massive role for their home club Donaghmoyne, who won their 18th county title in a row last autumn. But there was a variety of inspirations along Rosemary’s footballing path.

“Even just thinking about it now, I was able to watch them all when I was growing up. I was eight when the club won the first All-Ireland, I had all of them to watch and look up to. Then I had Amanda (Casey), Teeny [Cathriona McConnell], Linda (Martin) and everyone. I was lucky I had those great influences.”

This generation of Monaghan players get their Lidl National Football League Division 2B season up and running tomorrow (SUNDAY) when they welcome neighbours Cavan to Clones. With the League divisions split geographically, the Farney County are preparing for a mini Ulster league having been paired with Cavan, Tyrone and Armagh.

“Cavan on Sunday…that’s a great way to start the league. It’s good that it’s a home rivalry. You definitely don’t ever want to lose for Monaghan, but definitely not against your neighbours. It’ll be a good tough test. It’s always a good game when we play Cavan.

“Overall Division 2 is a very tough league. All the matches are really competitive, and once you get into the semi-final the teams on the other side are just as tough too.

“Last year was unfortunate that we didn’t get the chance to get out of Division 2 but hopefully this year we can get out of it and look forward to the Championship.”

In Thursday’s TG4 All-Ireland Senior Championship draw, Monaghan were remarkably paired with Cavan and Armagh again, while Mayo will also partake in the only four-team pool of Group A.

“We have Cavan and Armagh again and we are well used to playing each other, while Mayo will be a tough test too. We’re looking forward to it,” she said.

In last winter’s competition, Ciaran Murphy’s side caused quite the stir with victory over Tipperary, while they came agonisingly close to knocking out Galway in Carrick-on-Shannon, but eventually their comeback fell short in a one-point defeat.

Having League and Championship running consecutively means all teams have the chance to find their natural form, and Courtney says everything will rest on that first game, while coping with short turnarounds and knocks will be key.

“If you lose one game in this structure you are just scrambling to get back and left depending on other teams’ results.

“I think this year because every team has a match most weekends until August time, one of the big things will be who can manage their injuries most.

“Last year there was highs and lows from the Championship. We were on a high after the Tipp game, it was just unfortunate we got a few injuries from that game. It is hard not to think what would have happened if we had everyone on the pitch against Galway.

“We can take positives from it though, we learned so much about ourselves as individuals and as a team. It is important that we build on that this year. Our main hope last year was to get out of our All-Ireland group, but that didn’t happen unfortunately.”

This was a special week for Rosemary after she completed her third level education at Athlone IT. Already qualified in Sports Science, she completed a Postgrad in Further Education last Sunday, while she has also been working as a substitute teacher in Dundalk’s Ó Fiaich College.

But tomorrow she furthers her footballing education against Cavan. Over the years she has operated in every line for club and county – apart from goalkeeper – and tomorrow presents a similarly broad area of responsibility.

“I played corner back and full back at one stage for Donaghmoyne, I have been all over the place,” she said.

“I was the man marker on a couple of occasions last year. I was marking Aishling Moloney in the Tipp game and then in the Galway game I was sweeping for a while and then moved into midfield. I was all over the place. That’s me in a nutshell: I never can hold a position, I stroll about everywhere.

“I’d say I’ll have one of those roles again tomorrow. We have so many quality forwards in the Monaghan team now, so I don’t think I’ll manage to squeeze in there.

“The minors were in the All-Ireland two years ago and I think six or seven of them came on to our team. They are pushing so hard for selection now. This year we have taken a few 16 and 17 year olds into the panel. That’s all helping the buzz in the camp too. It feels like Championship time already.”