FOOTBALL: “I didn’t think we fired at all in the first-half but in fairness to the players, they really did respond very well in the second-half” – Fahy 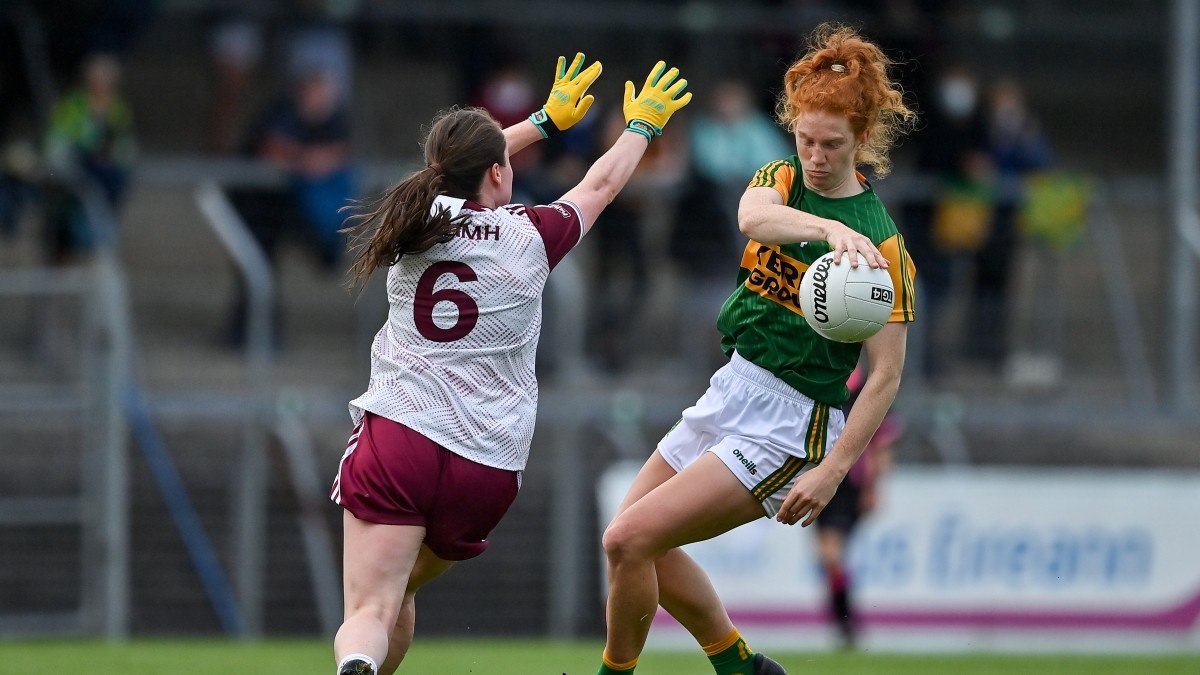 Compiled by John Fallon (Louise Ní Mhuircheartaigh of Kerry in action against Nicola Ward of Galway during the TG4 Ladies Football All-Ireland Championship Group 4 Round 1 match between Galway and Kerry at Cusack Park in Ennis, Clare. Photo by Brendan Moran/Sportsfile)

Dublin manager Mick Bohan says he faces some tough selection discussion with his players as they seek to manoeuvre their way into the knock-out stages of the TG4 All-Ireland Senior Championship.

Champions Dublin lined out without All Stars Sinead Goldrick, Carla Rowe, Lyndsey Davey and Nicole Owens for their opening round 2-18 to 1-11 win against Tyrone, and Bohan says he has his hands full keeping the full squad satisfied.

“They are a great group to deal with. They all want to play. It was actually funny the last couple of days trying to explain to people the process of this. I could see the eyes cutting into me on the bus on the way down, but sure that’s the nature of the competitive group,” said Bohan, whose side was helped to victory by Jennifer Dunne and Siobhan Killeen goals.

“Some of the players we just have to be mindful of because within seven days they’re out again. There’s obviously people at different stages of their career.”

Dublin will secure their place in the Quarter-finals with victory over Waterford in next weekend’s Group 3 encounter, and in Group 2 Cork will aim to do likewise when they face Tipperary.

Last year’s runners-up were 1-9 to 0-10 winners against an impressive Meath side that was playing its first Senior game following last year’s TG4 Intermediate success. Bríd O’Sullivan’s goal just before the interval paved the way for Cork, who held on to win despite an impressive Meath comeback.

“The most important thing is the win,” said Cork manager Ephie Fitzgerald. “We knew they are a good team and they have a system that’s very difficult to break down.

“The character of the girls shone through, and they show it time after time and they needed it again there today when those few things went against them.”

In the four-team Group 1, Mayo were 1-18 to 0-15 winners over Cavan, and Michael Moyles’ side take on Monaghan next weekend. Rachel Kearns hit Mayo’s goal, while seven Shauna Howley points meant the Ulster side were kept at arm’s length, despite six Amy Rooney points in the second half.

“We’re very pleased,” said Moyles. “We were 11 players down and the young players carried the mantle and soaked up the pressure and did the right things – we have some very good intelligent players coming through and that is a credit to the clubs and underage system.”

Elsewhere, Kelly Mallon, Eve Lavery and Alex Clarke struck three quick goals in the second half as Armagh were impressive 4-17 to 1-12 winners over Monaghan.

“When we got going, we got our tails up and took some great scores so I am delighted with that,” said Armagh manager Ronan Murphy.

And Galway manager Gerry Fahy admitted he was relieved to see his side claim victory after they fought off Kerry’s late comeback to pick up a 2-11 to 2-10 win in Ennis.

“I didn’t think we fired at all in the first-half but in fairness to the players, they really did respond very well in the second-half,” said Fahy.

“There was probably a couple of chances that we could have taken to make our lives a bit easier but the battling qualities of the team really shone out.”

In the Intermediate Championship, Longford pulled off the shock of the weekend with their 3-11 to 2-11 victory over favourites Westmeath after extra time. Sarah Dillon’s late goal sent the game into the added time, but two points by Lauren Maguire gave Longford a fully deserved victory.

Elsewhere, there were Intermediate Championship wins for Kildare over Roscommon; Natasha Ferris led the Down comeback over Offaly in their 3-14 to 2-14 win; Wexford cruised past Sligo with a 4-13 to 1-10 triumph; while Leitrim had two late Michelle Guckian points to thank for their 1-12 to 1-11 win against Fermanagh.

And in the Junior Championship, there were victories for Derry over their Ulster rivals Antrim, while Wicklow proved too strong for Limerick.