FOOTBALL: “I was happy with the first ten minutes of the second half” – Michael Moyles 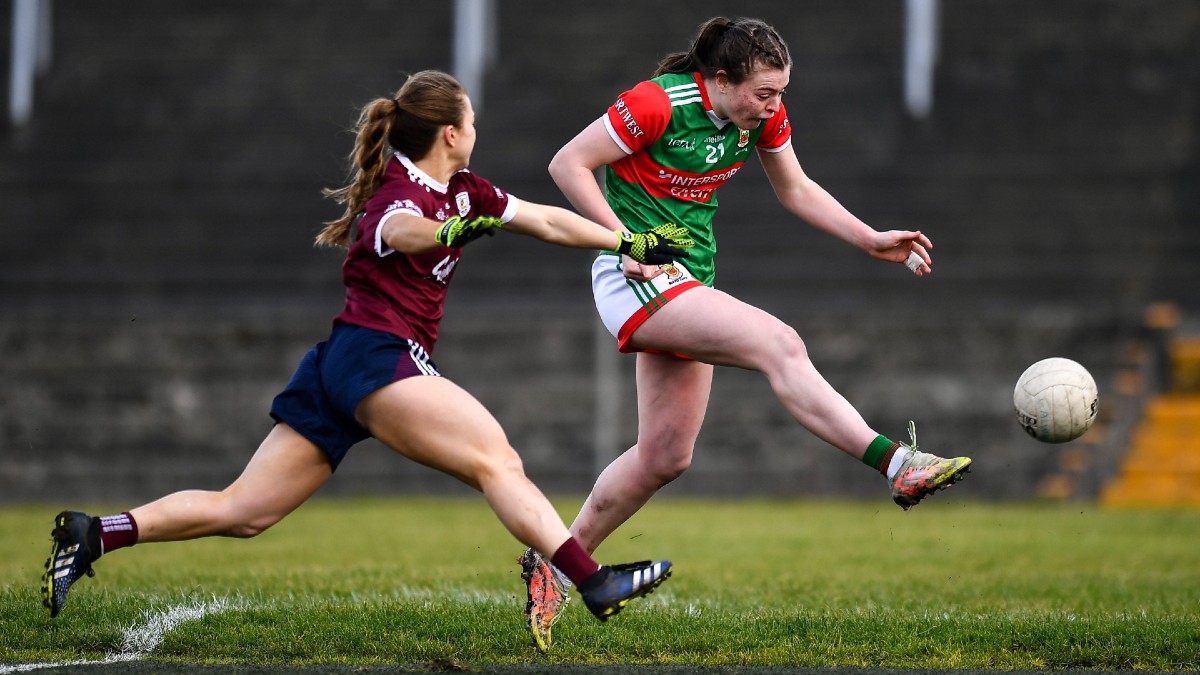 Compiled by Daragh Small  (Sinead Walsh of Mayo scores her side’s sixth goal despite the attention of Aoife Ní Cheallaigh of Galway. Photo by Ben McShane/Sportsfile)

Mayo manager Michael Moyles was impressed by his players’ devasting third quarter that sealed their place in the Lidl NFL Division 1 semi-finals.

Lisa Cafferky and Sinéad Walsh both helped themselves to two goals in the comprehensive 6-6 to 2-8 victory over Galway at Tuam Stadium.

But Mayo were only 3-3 to 1-3 ahead at half-time before they blitzed their Connacht rivals and put the game out of sight.

“I felt in the first half when we had the breeze we didn’t transition very well, we tried to go too long,” said Moyles.

“We talked about that at half-time. I was happy with the first ten minutes of the second half. Regardless of the players that Galway are missing, they still play the same style of football, and it’s very hard to stop.”

Galway came into this game on the back of a narrow defeat away to Donegal while Mayo had scored seven goals in their huge victory over Westmeath at the Connacht Air Dome.

And despite goals from Mairéad Seoighe and Kate Slevin Galway lost again, with their new joint-manager Maghnus Breathnach looking for his side to bounce back next time out.

“In fairness to Mayo they’re an experienced side, All-Ireland semi-finalists last year. They took their opportunities and they really drove it on, so it’s something for us to learn from as well,” said Breathnach.

We’re in the same situation we were in last year, two losses. We’ll be gunning for Westmeath now. It’ll be a serious game. It’s a big game for those girls. A lot of them are younger and they’ll take serious learnings from it.”

Kerry also advanced to the next stage after a 1-13 to 0-9 Division 2A victory over Clare at a windswept Doonbeg. Louise Ní Mhuircheartaigh came up with the crucial goal in the first half and Kerry held their nerve against the breeze after half-time.

In Division 2B, Lauren McConville and Aimee Mackin were the goal-scorers in Armagh’s 2-13 to 0-10 success against Cavan at the Athletic Grounds. That win also means Armagh move on to the final four.

Down lead the way in Division 3A but they were held to a 3-6 to 3-6 draw away to Sligo in the IT Sligo grounds. But in Division 3B, Kildare booked their place in the next round with another win, this time it finished 2-11 to 2-5 against Longford.