FOOTBALL: I’m sure it will be a great game to play but we are just looking forward to getting out there” – Hannah Tyrell 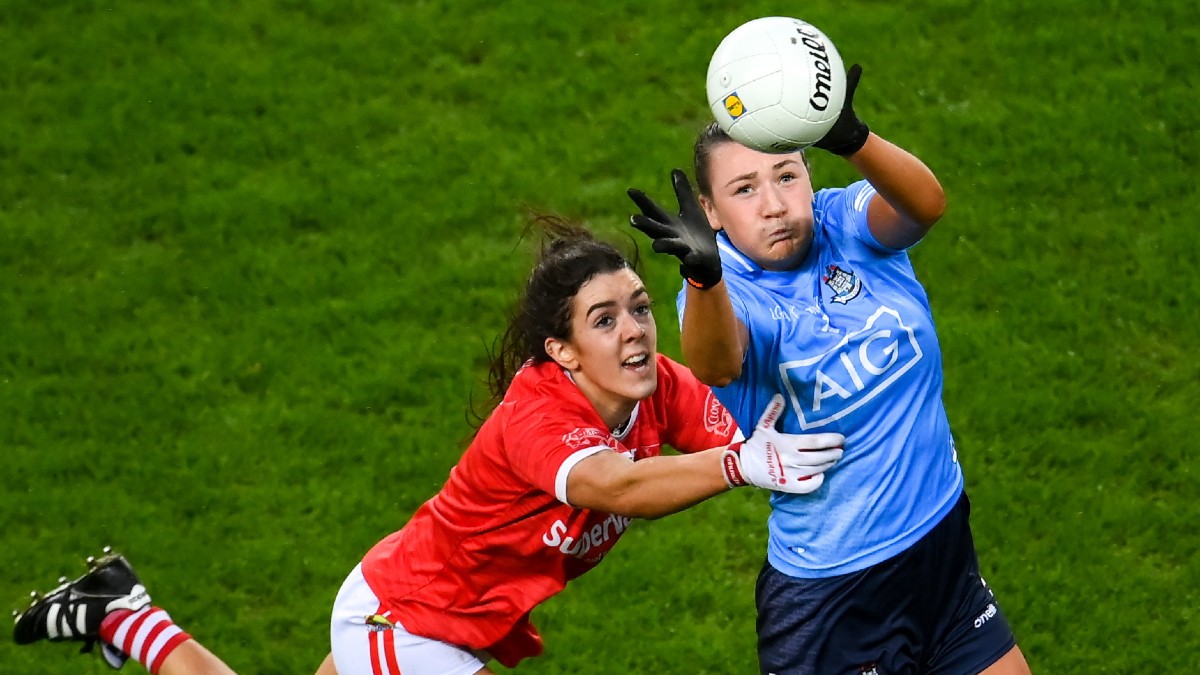 Compiled by Daragh Small (Niamh Hetherton of Dublin in action against Erika O’Shea of Cork during the Lidl Ladies Football National League Division 1 match between Dublin and Cork at Croke Park in Dublin. Photo by Stephen McCarthy/Sportsfile)

Dublin TG4 All-Star Hannah Tyrrell says it’s all about fine-tuning at this stage of the season as her side turns their attentions to a clash with rivals Meath in the Lidl National Football League Division 1B.

The reigning champions continued their fine start to the league with a 2-15 to 2-3 victory over Cork at Croke Park on Saturday and Tyrrell scored 1-9.

TG4 All-Ireland champions Meath were also victorious, they got the better of Waterford, meaning both sides are through to the next stage before they meet in Round 3.

“We are just looking at it as another game, looking to improve and rectify, it doesn’t really matter who it is,” said Tyrrell.

“I’m sure it will be a great game to play but we are just looking forward to getting out there, getting more game time under our belt and improving each game in the season.”

There were five postponements due to the inclement weather but Dublin did not let the rain slow them down, as they powered to a 12-point win over Cork under lights.

Nicole Owens scored an early goal and Mick Bohan’s side took a 1-9 to 0-2 lead into the break. Tyrrell added the second goal from the penalty spot and the efforts of Libby Coppinger and Áine O’Sullivan were consolations.

Meath were similarly impressive when they beat Waterford 1-10 to 1-2 in Dungarvan. TG4 Player of the Year Vikki Wall gave them the perfect start with her goal and six points from the boot of All-Star Emma Duggan helped seal the win.

“I’m delighted to see all the kids here watching her. She’s only 18. Those kids aren’t far away from 18. They only have a couple of years left to be a Emma Duggan.”

The Connacht derby between Galway and Mayo in Division 1A was refixed for next weekend, while Donegal made it two from two in the other game – Maxi Curran’s side beat a resilient Westmeath 2-11 to 2-6 at St Loman’s.

Karen Guthrie led the line for Donegal on this occasion and her two goals were the difference.

“Two from two is a great place to be,” said Curran.

“Your destiny is in your own hands in terms of qualifying for the league semi-final and that’s really important because the Championship is so far away, getting an extra competitive game would be a huge boost and a great benefit at this time of year.”

The game between Clare and Kerry was also rescheduled for next weekend but Laois got the better of Tipperary in the other Division 2A tie, it finished 2-8 to 2-6 in Heywood.

In 2B, Armagh and Cavan was refixed while Monaghan edged out Tyrone, 0-10 to 0-9, in the all-Ulster tie.

In Division 3, Sligo’s game against Down and Longford’s clash with Kildare were both postponed but Roscommon beat Louth while Wicklow and Wexford drew.

And in Division 4, Leitrim and Fermanagh were victorious in 4A while Limerick and London won their matches on the opposite side.