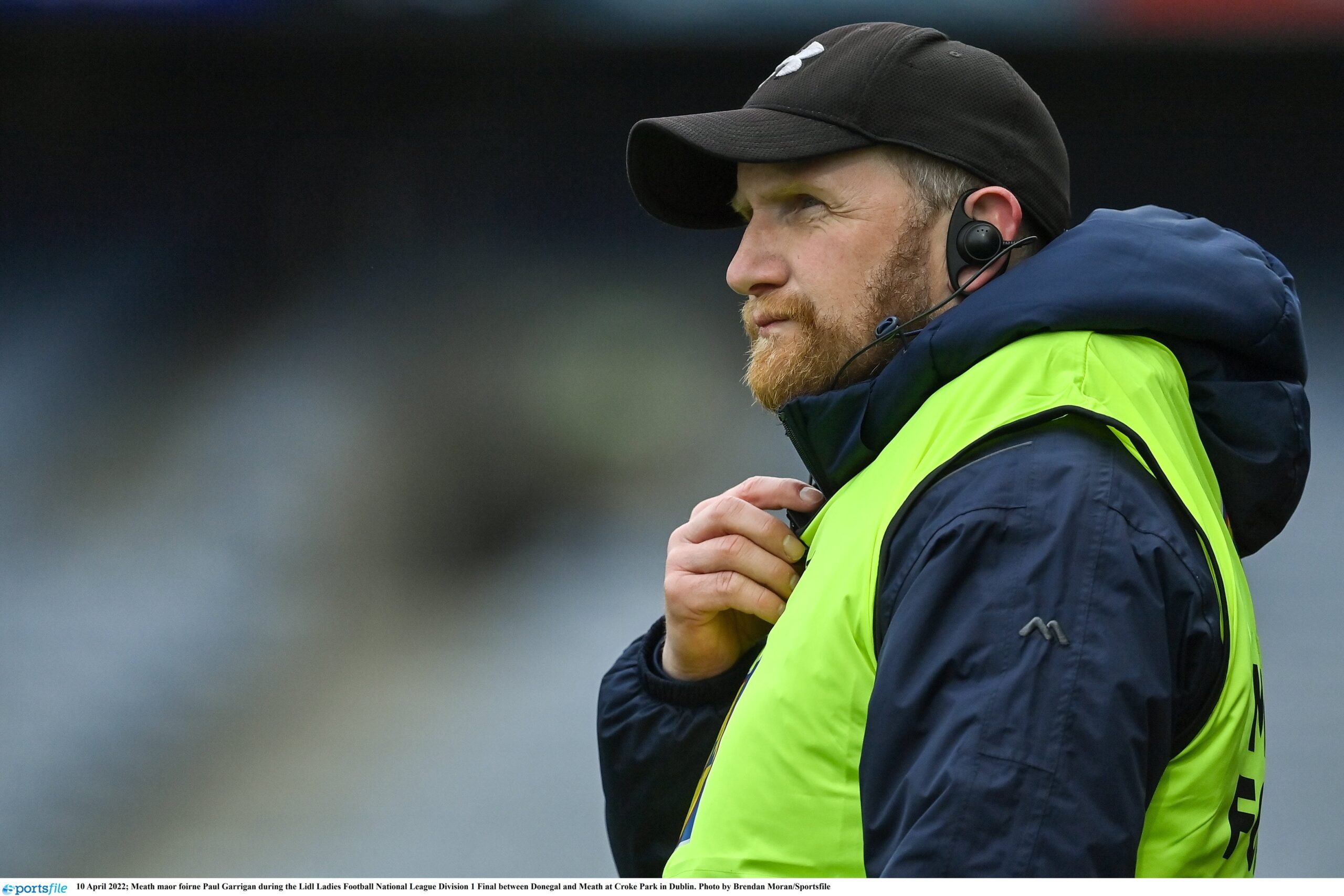 Before this year’s TG4 All-Ireland senior final, Paul Garrigan drafted 38 personalised letters of appreciation, one for every player in the Meath squad.

Everyone from the county board to the players who defeated Kerry on the pitch at Croke Park that day had known that the Royals would be losing their inspirational coach at the end of the season.

And this was his way of telling his team how much they meant to him and what each had contributed to the cause.

“I wanted to thank all of the players and I wanted them to feel they were important,” said Garrigan.

“It’s probably the biggest story I have ever seen in Gaelic football. To see a team to progress from where they were – bottom of Division 3, a bad Intermediate team. To come from that to where they are now.”

The Oldcastle native grew up in Meath and played for the local club before he studied Hotel and Catering Management, which brought him to a new life in Wicklow.

Garrigan relocated to Baltinglass around 20 years ago and he played football there too but a former Wicklow great, Hugh Kenny, enticed him to go down the coaching route.

Garrigan looks up to the likes of Jim Gavin and Jim McGuinness but he developed his own style over the years, and during the early days he sharpened his tools with Baltinglass.

He experienced his first success when he took a juvenile Ladies football team in the club through the ranks, and when they got to senior level he first crossed paths with Eamonn Murray.

The current Meath manager was involved with Boardsmill and the Meath minors at the time. It was a Royal County team stacked with the current senior crop, and after a challenge match with Baltinglass, Garrigan mentioned, flippantly, that if an opening ever came up in Meath, he would be interested.

A couple of years later, Meath were on the wane, and the opportunity arose. The current PRO, Fearghal Harney, was on the lookout for a management team to come in and lead a group of players that had potential.

Garrigan had just taken over the Baltinglass senior men’s team but halfway through the year he received a call from Murray.

“I had seen something in those Meath players when they played Baltinglass that day,” said Garrigan.

“Eamonn rang me and even though I said I was tied up with Baltinglass, that was how I got in. I was called to a meeting, there were interviews held.

“Myself, Eamonn and Michelle Grimes went for it. Fearghal did the interviews with an executive that night, and took a chance on three people.”

Meath had just been relegated to Division 3 of the Lidl National Football League. Despite the talent coming up, it was a desperate time.

Paddy Dowling was also added to the ticket and Garrigan set about inspiring a new generation along an adventure that would have a fairytale ending.

“I would be a big fan of the NBA and I followed the San Antonio Spurs with Greg Popovic, I liked the way he drove culture. They have a rock and a hammer on the front of their jersey and I was thinking that is a good symbol,” said Garrigan.

“I spent the afternoon here one day, we are not short of granite in Wicklow, I got 30 bits of rocks and gave them to the players.

“I said: ‘listen, there is a big task here ahead. That is a big piece of rock. We just have to chip and chip away at this. At any time, one big hit at this the rock will crack but I need you to keep on the journey with me.”

Garrigan showed the players where they were ranked in Ireland based on the facts and figures – Meath were 17th.

He posed some difficult questions in the early meetings; how did they think they were perceived around the country? They set out goals and new standards.

Garrigan put up a big circle in the middle of the room. He wrote in players, management, clubs and the county board. If Meath were going to be successful, they had to all be together in that circle. It took another two years before he felt comfortable saying the circle was complete.

In the meantime, Meath were crowned Leinster intermediate champions before Tipperary defeated them in the TG4 All-Ireland semi-final in their first year.

“I realised the girls had the potential to win an Intermediate All-Ireland. They were underachieving. I hadn’t got enough time with them. It made it easier for me to come back,” said Garrigan.

Shane Wall and Mark Brennan came in to add more backroom quality but there were still plenty of heartaches around the corner – the following year Meath lost a Lidl NFL Division 3 final against Wexford before they were hammered in the TG4 Intermediate decider by Tyrone.

“They were asking was I coming back after the final and I couldn’t think straight,” said Garrigan.

“But losing the finals was gradually getting us to where we wanted, the girls were getting more determined and stronger. They were buying in and we could still get better.

“We gave them a smaller rock in 2019. They had chipped away at a huge amount. We used that motivation and hurt. We hadn’t shown what we were capable of and needed to get back to Croke Park.”

Eugene Ivers was next on board, while Meath went on to take Division 3 honours with victory over Sligo in the Final, only narrowly losing the TG4 Intermediate final to Tipperary.

“I was nearly gone at that stage. I met with the players and I was really not fussed about going back,” said Garrigan.

“You are in Division 2, we have left you in a better place but a group of them convinced me to come back. It was the people that were staying and the way they were talking.”

Niamh O’Sullivan was a huge addition, Emma Troy was back too while Kelsey Nesbitt was also added to the playing squad. And at this stage, Meath were beginning to tick.

It was his latest bid to inspire this team to glory and his plans were coming to fruition. Meath had a great League and beating Armagh was a huge statement, before Covid hit and everything was shut down.

“When I talk to someone, I like to see their body language. Are you watching what I am saying? Are you nodding your head or looking at the ground? You don’t know if somebody is on their mobile phone, you don’t know who is listening to the conversation, so I found it difficult,” said Garrigan.

Covid restrictions could have pushed the project off the rails but Meath stayed on track and by the end of 2020, they were TG4 All-Ireland Intermediate champions.

“It was the first time for the girls playing senior for ages,” said Garrigan.

2021 was unforgettable, with the 12 June league win away to Cavan a likely turning point. That Meath team had been bullied by Cavan in the past but sailed to victory at Kingspan Breffni.

Confidence was high and they thumped Kerry in the Lidl National League Division 2 decider before picking up where they left off in the summer months.

“We needed luck along this journey. That day against Cork in the All-Ireland semi-final, we got luck,” said Garrigan.

“We had the systems in place but we could go up to training tonight and you could be seven points down with 1 minute 40 seconds left. We could do 150 training sessions and we would never win or draw.

“That day in Croke Park, I remember turning around and gathering up the footballs. We ran in the five subs as well. Then you are facing into extra-time and the girls are starting again. That was a big one, the importance of the panel.”

Meath beat Cork 2-12 to 2-10 after extra-time and still went into the All-Ireland final as underdogs. Dublin were chasing a fifth Brendan Martin Cup in a row.

Garrigan inspired his group once more – showing them stories of teams and individuals who defied the odds, helping to instil an unwavering belief that they could do this.

“Dublin not playing us and being used to the way we play shocked and rocked them. They couldn’t really cope,” said Garrigan.

“They were not able to deal with the way we defended and transitioned the ball. ‘We are losing, we are four-time All-Ireland champions.’ That is what got us over the line that day.”

Emma Duggan’s wonder-goal sealed a precious 1-11 to 0-12 success, a watershed moment for this group. The highest of highs.

“The journey was over. I definitely felt, I was tired. When you hit that high, the journey is always better than the destination.

“I felt, we have got there, we have won it, it was kind of like a washing machine. I can’t really enjoy this – it’s after coming so quick.

“The girls were in a bubble, never got to thank the players. We won the final, came back on a bus, fired into the general public. We went back to Wicklow, nobody thanked anyone. Do I really want to go back?”

Garrigan weighed up his options but knowing a few players had missed out through injury made him believe again. There was still one more year left in this project.

“This year was probably the most difficult year I have ever had coaching or being involved with a football team,” said Garrigan.

“It was so hard to bring the girls back down, re-motivate them, energise them. Even egos, you have won an All-Ireland, maybe I am a little bit better than I think. Maybe we don’t need the support structures.

“There is a motto I have: give everything, expect nothing and never forget where you came from in 2017. If you remember those three things, you will always be happy playing with Meath. You will never go wrong.”

Meath were crowned Lidl NFL Division 1 champions after victory over Donegal. But losing to Dublin in the TG4 Leinster final meant for more meetings and soul-searching. They had to fight hard to return to Croke Park for All-Ireland Finals day.

There, they dismantled Kerry again and Garrigan stepped away after an 11th visit to headquarters as part of this wonderful setup.

“This year I showed them pictures of a lot of the people who achieved against the odds again,” said Garrigan.

“I showed them the ones who never backed it up – Leicester City, Anna Kiesenhofer, Offaly’s men’s footballers. Then there were other pictures of people who did back it up. Naomi Osaka won the US and then the Australian, Meath ‘87 and ‘88.

Meath backed it up in spades but crucially, Garrigan’s team had now gone from chasers to the ones being hunted.

And in the busy life of a GDA in Wicklow, he now wants to take some time out to spend it with his wife Niamh and son Ollie. He appreciates the sacrifices they made throughout his journey and now it’s his time to give back.

But as he describes it, ‘the hamster wheel keeps turning.’ He is addicted to making people and teams better, and the buzz he gets from that. And whether it be coaching his son’s U-7 Baltinglass team, or a senior inter-county men’s outfit – he refuses to rule anything out.