FOOTBALL: ‘It’s a symbol of hope for many and I’m in a very privileged position to give people this vaccine.’ – Karen Kennedy, ex-Dublin 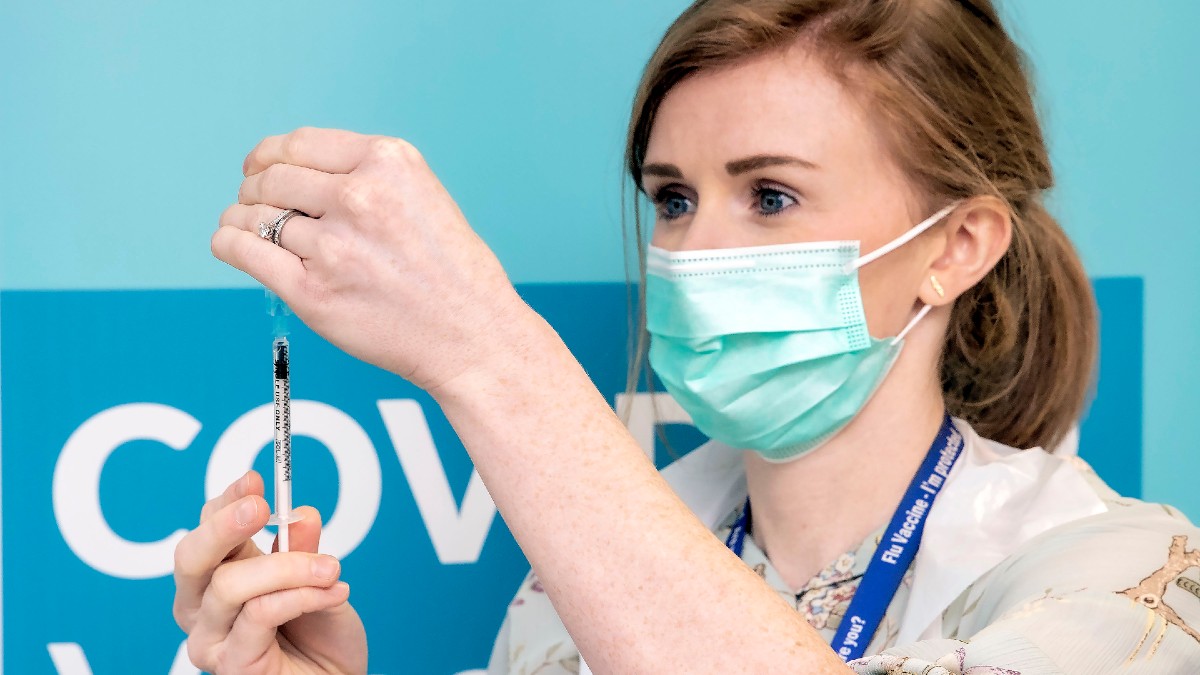 Karen Kennedy was part of an historic panel of Dubliners that won a first TG4 All-Ireland Senior Championship for the county back in 2010, and more than ten years on, she is at the heart of an even more important team.

The former Naomh Mearnóg and Dublin player is a public health nurse by trade, but since the outbreak of Covid-19 she has seen her role expand, most recently into the administering of coronavirus vaccines.

Kennedy is part of a HSE vaccination team operating in north Dublin city and county and much of their initial efforts have centred on care homes in the region. She was asked to lead a vaccination team on their recent appearance on The Late Late Show, where she was ‘honoured’ to give the vaccine to some frontline healthcare workers.

“With my history in sport, teamwork has been ingrained in me from an early age. Teamwork plays a huge part in managing our job, day to day. But in a global pandemic, teamwork is our lifeline,” said Kennedy.

“It’s hard to put into words sometimes; it is just so rewarding to be part of it, and to be involved of this vaccination team. Covid-19 has affected all of our lives in different ways. It is personal to all of us for our own reasons.

“We have seen at first hand the relief and the joy that this vaccine has given people. It’s a symbol of hope for many and I’m in a very privileged position to give people this vaccine. They are genuinely so happy to receive it.

“Personally, it was an honour to be asked on to The Late Late Show as part of the vaccine team. I was very proud to share that moment with my colleagues and to vaccinate such inspiring health care workers, but I was nervous. It’s a huge moment and you just want to represent yourself, your profession, and present the message about the vaccine in the light that it’s intended.

“There was a great atmosphere in the studio; people have hope in this vaccine and there is a positivity that surrounds it. But there is also raw emotion there as people reflected on recent months. It was a defining moment for me, definitely.”

While the rollout of Covid-19 vaccines will likely be at the forefront of Karen’s professional life for the coming months, playing Ladies football is no longer a distraction. Climbing the steps of Croke Park to pick up the Brendan Martin Cup in 2010 proved to be her final act in the sky blue shirt, as the effects of rupturing both cruciate ligaments in consecutive teenage years caught up with the then 25-year-old.

Called into the Dublin panel as a 16-year-old in 2001, Kennedy soon gained a reputation as a dangerous attacker, and in those early years she took the tentative steps of a newcomer, just before the likes of current captain Sinéad Aherne and a handful of the current players, who all won their fifth All-Ireland medals in December.

But despite retiring early from the game, Kennedy says she has absolutely no regrets.

“Pulling on that Dublin jersey at any time is an absolute privilege, but putting it on on All-Ireland final day in Croke Park, there is no better feeling. While I didn’t get on the pitch that day, I am so very proud of what we achieved. I look back on that memory very fondly. I have a tight grip on that All-Ireland medal.

“That last county season really tested my knee. I felt that I probably wouldn’t be able to get another county season out of it. I stepped away. I had commitments in work as well. I was an operating theatre nurse then and was working unsociable hours. I played some club football, and had a bit more of a relaxed approach to football after that.

“I had no regrets in terms of my footballing career. I am very happy to have played for the years that I did and very happy to be in 100 per cent health and not struggling with those knees at the minute.”

The vast majority of Kennedy’s achievements were completed alongside club and county teammate Cliodhna O’Connor. The Naomh Mearnóg pair lifted the cup together in 2010, but their paths were intertwined at club level from 1996, when the pioneering work of Mick Walsh introduced the ladies game, to an All-Ireland Intermediate club final appearance ten years later.

A fall off in playing numbers saw the Senior ladies team in Portmarnock disbanded for a while, but with O’Connor to the fore of the effort, they are back in action and recently won the Dublin Junior D championship – the first step on the road back to the top flight.

“Cliodhna, she is a fantastic ambassador for the sport. She is such an experienced footballer and she has been a great player to play alongside. Naomh Mearnóg are definitely benefiting from all the experience and the knowledge that she has. She should be very proud of that.

“It’s absolutely fabulous to see that the club is back up and running an adult team again. I know a lot of clubs can go through ebbs and flows, they can go through their highs and lows and that’s natural for any sporting club.

“2006, it’s a year that stands out for many of us. At that stage we were amalgamated with St Sylvester’s, so we had the experience of Sinéad Aherne, Niamh McEvoy and Anne Clarke on our team as well.

“That year, for us, travelling the country, playing such experienced teams and coming out with the wins, we grew in confidence. We excelled into Senior then. We got to a Senior County Final, but unfortunately we lost to Na Fianna that day, but we did win an All-Ireland Senior 7s title in 2008.

“That team made a lot of history and memories together from that time. Some of the players I am still very good friends with today. They are some of my best friends.”