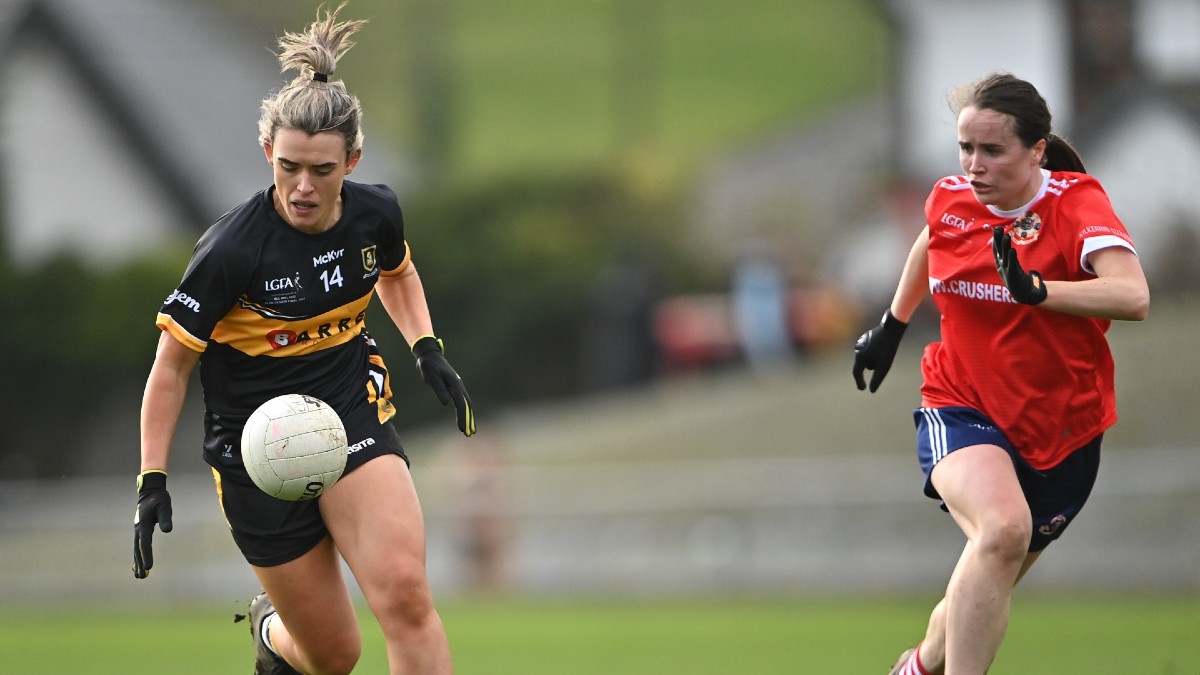 By DARREN KELLY (Doireann O’Sullivan of Mourneabbey in action against Nicola Ward of Kilkerrin-Clonberne. Photo by Piaras Ó Mídheach/Sportsfile)

Kilkerrin-Clonberne manager Willie Ward said that once his side were able to negotiate the Mourneabbey challenge early, they were well on their way to a first ever currentaccount.ie All-Ireland Senior club title.

The Galway champions suffered heartbreak when these sides faced-off in the 2019 decider but it was Kilkerrin-Clonberne who looked like the team with all of the experience in the closing stages in Birr.

“It’s absolutely brilliant, it’s amazing for the whole parish that’s here today,  everyone came out to support us,” said Ward.

“The confidence of the team grew towards the end. They were quite comfortable keeping the ball, comfortable on the ball. We knew exactly what we needed to do.

“You’d expect us to be nervous. We were all a bit tense. We were relaxed enough last night and they arrived this morning in good form but the initial few minutes of the game was going to be a bit edgy.

“I knew we were beginning to settle into it and I felt that nerves weren’t going to be a factor after we got five minutes over.”

Laura Fitzgerald scored her 11th goal in four club games but Mourneabbey went into half-time 1-6 to 1-4 in arrears.

Doireann O’Sullivan scored first from a free and by the time she tapped over her third point in the 22nd minute, Kilkerrin-Clonberne were already well in charge.

Eva Noone, Olivia Divilly, Ailish Morrissey and Nicola Ward were all on target while Miskell scored the goal from distance in the 12th minute. Ward’s side looked relatively comfortable until Fitzgerald scored from a penalty with the last kick of the half.

Nevertheless, Kilkerrin-Clonberne were composed on the resumption and Olivia Divilly scored again. Doireann O’Sullivan scored twice but those points were cancelled out and when Ciara O’Sullivan scored Mourneabbey’s first point from play there were only ten minutes remaining.

Kilkerrin-Clonberne were 1-10 to 1-7 in front at that stage and they held Mourneabbey scoreless from here with Eva Noone putting a gloss on the final scoreline.

“They didn’t perform and that’s not any way disrespectful to Kilkerrin-Clonberne, they had a great game plan, they executed it, we didn’t execute what we were meant to do.

“And we didn’t score from play until the ninth minute from the end. I didn’t realise that until someone pointed it out to me. That’s not us.

“We missed a chance in the first minute, if that goes over the bar, maybe it changes the momentum of the game.”