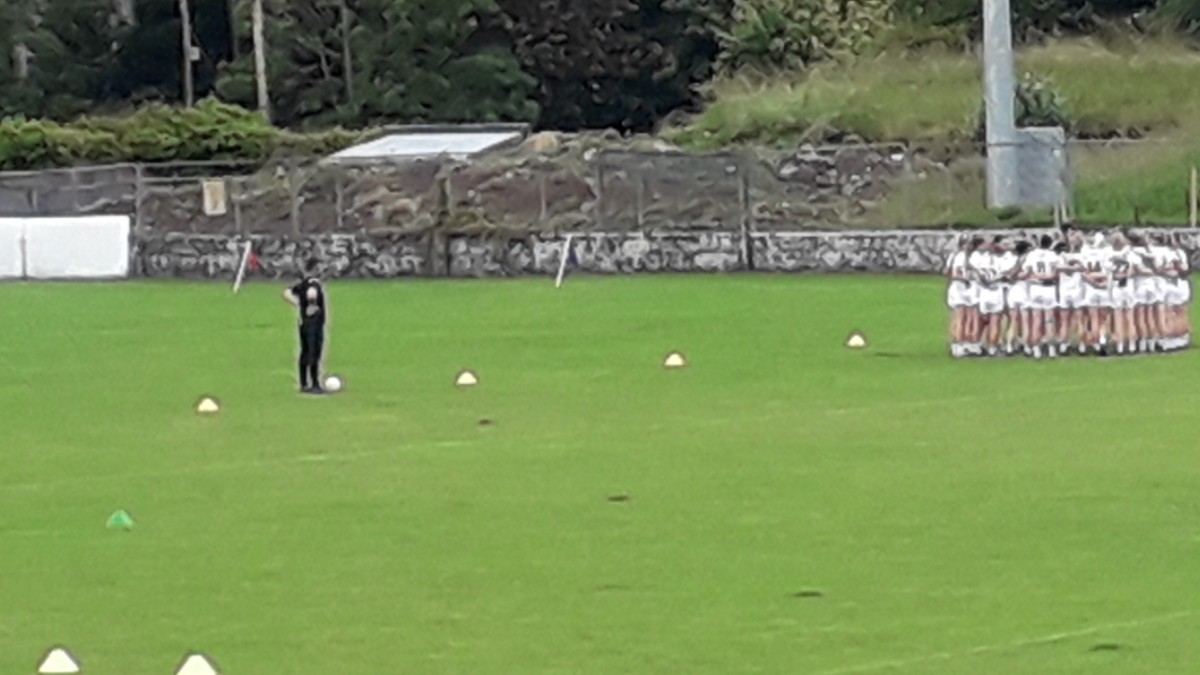 by Darren Kelly in Duggan Park

Kildare struck the first blow in the All-Ireland intermediate championship’s ‘Group of Death’ on Sunday (11th July) with this three-point victory over last year’s semi-finalists Roscommon.

A Neasa Dooley penalty dispatched to the net on 26 minutes proved to be the game’s decisive score as Daniel Moynihan’s charges bounced back from their league final defeat.

The Lilywhites were structured throughout, cutting out space for their opponents in defence before raiding on the counter attack.  Rebecca Finan aside, Roscommon’s forwards struggled to create sufficient scoring opportunities.

It felt more open at the start and Finan gave the Rossies the lead on 45 seconds but Lara Curran took Gillian Wheeler’s pass for the equaliser before the two-minute mark.

Dooley put Kildare in front on four minutes but with Finan efficient with her chances, it was 0-2 apiece on five minutes.

The two team’s respective scorers-in-chief were shining in the early stages as the weather delivered ideal football conditions despite the incessant rain earlier that day in Ballinasloe.

Dooley made it 0-3 to 0-2 to Kildare on six minutes but the first major moment arrived on eight minutes.

Roscommon penetrated the central channel of the Leinster team’s resilient rearguard and the advancing Sarah McVeigh picked up Laura Fleming who sent a low bullet into the back of the net.

Diane O’Hora’s team were 1-2 to 0-3 ahead but didn’t add to their account again for 10 minutes.  Wheeler set up Curran again and Aoife Rattigan found the target on 17 minutes to level for the third time.

Kildare had the first half wind but couldn’t find a way to put distance between them.  Ciara Wheeler’s low ball was denied while Hazel McLoughlin’s effort was accidently blocked by Dooley.

Jennifer Higgins supplied Finan to put Roscommon back ahead on 18 minutes but Kildare had overturned the deficit within 120 seconds.  Curran’s free was followed by Dooley’s third from play and it was 0-7 to 1-3.

Joanne Cregg stormed up the field to register the equaliser on 23 minutes but a higher dividend might have been an option.  Roscommon did find ways to open up Kildare at times but didn’t take them and two major chances in the second period ultimately proved costly.

The decisive score followed shortly.  Roscommon had switched captain Sinead Kenny and Megan Kelly in an attempt to curtail Dooley and while Kelly had more success, the Kildare sharpshooter still made her presence felt.

Coming in from the right, Dooley turned her marker before a pass to Ciara Wheeler drew the foul and referee Shane Curley awarded the penalty.  Dooley got three green flags the last day out against Laois and made no mistake with the resulting spot kick.

It was an advantage Kildare never relinquished even if they only led by one at the break.  Aoife Gavin pointed for Roscommon before setting up Finan for another and they trailed by just 1-7 to 1-6 at half-time.

That being said, the contest seemed to lose its bite after the restart and despite enjoying the advantage of the elements, Roscommon finished the second 30 minutes with just one further score.

Both keepers earned their keep in the opening stages as Roscommon’s Helena Cummins and Kildare’s Dervla McGinn pulled off big saves.  Curran’s free on 35 minutes made it 1-8 to 1-6 for Kildare.

Caroline Conway set up Finan for her fifth score two minutes later but they would draw a blank for the remaining 23 minutes.  Curran and Dooley put three between them while substitute Erica Burke’s low drive on 58 minutes went the wrong side of the post.

Aisling Hanly also came close to a Roscommon major in injury time but Dooley’s fifth point beforehand gave Kildare the buffer they craved.  Victories in three-team groups are priceless and a quarter-final spot will be theirs if they get a result against Laois next week.

To return to the championship knockout stages, the primrose and blue may need a four-point win over the Division 3 league champions when they meet in a fortnight.  Kildare gain the upper hand in Group 3 but there are plenty of twists still to come!