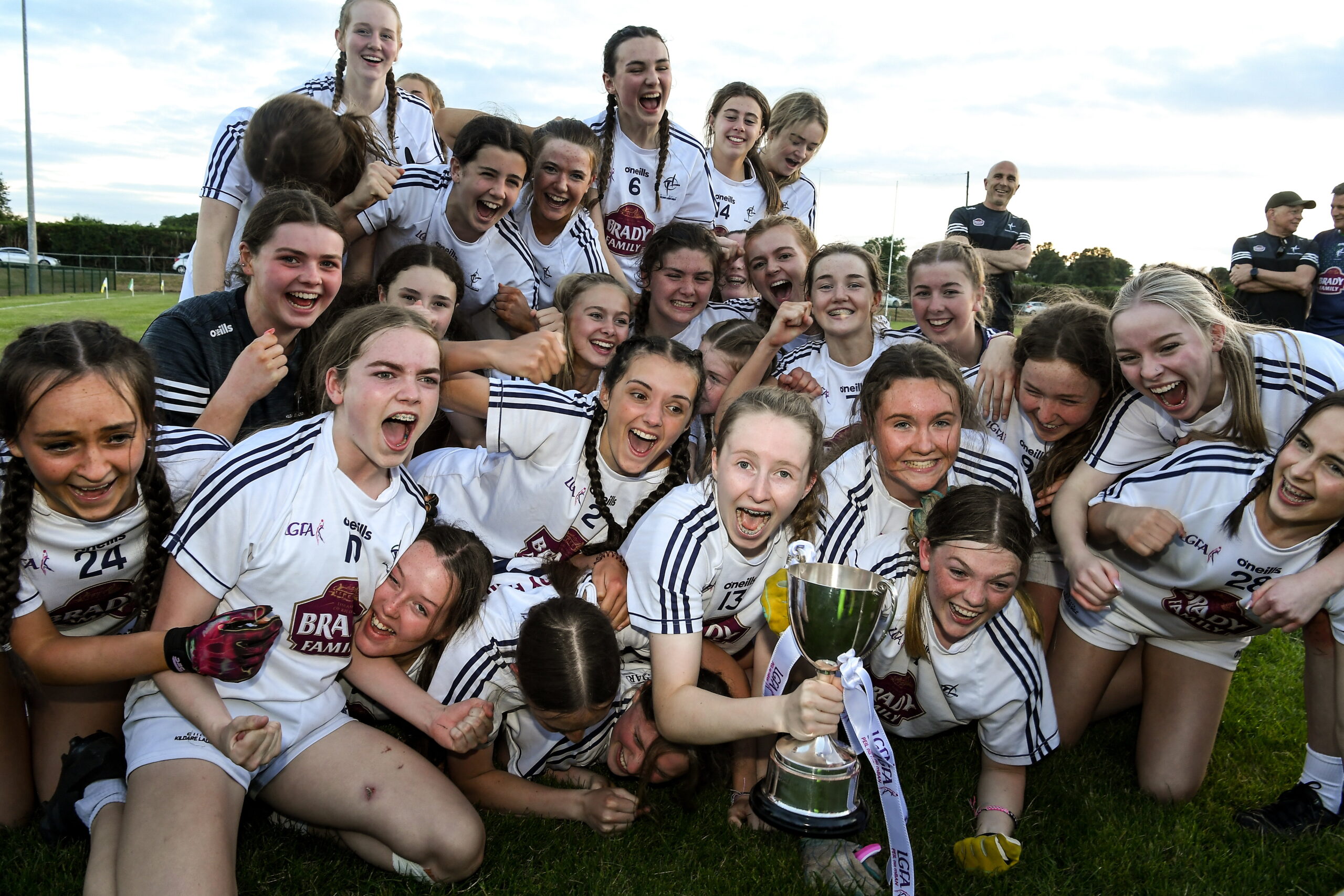 By Aisling Clery (Kildare’s Caoimhe Egan and her team mates with the cup. Photo by Ray McManus/Sportsfile)

Aoife Murnane scored two goals while a strong second half showing ensured the All-Ireland U16 ‘B’ Championship was awarded to Kildare after they got the better of Tipperary at Crettyard.

Tipperary led by 0-7 to 0-4 at the break but a reinvigorated Kildare attack, and goals from Tara Rafferty and Murnane, pushed the Lilywhites into a lead they did not relinquish.

In beautiful evening sunshine, Tipperary immediately got off the mark when Ciara O’Hora pointed in the opening minute. It was to be O’Hora’s first score of seven from play as the Arravale Rovers player hit all of Tipperary’s first half scores.

While both teams tested out the keepers early on, O’Hora added a second point before Rafferty converted a free on ten minutes, and then Tipperary surged further ahead with two quick-fire points from O’Hora.

Aedin McCormack prevented a Kildare attack and instead Tipperary added a further point through O’Hora. Kildare were enjoying plenty of possession but Tipperary goalkeeper Chloe Shorley was equal to their attacks, indeed Caoimhe Egan found herself with only the goalkeeper to beat, but Shorley did enough to see the ball go wide.

Despite Niamh Murphy and Meabh McDonagh both marking O’Hora, she found enough space to hit Tipperary’s sixth point on 26 minutes. This was immediately cancelled out by a Rafferty point set up by Egan. While O’Hora added a seventh, Kildare made it a three-point game at the break, as Rafferty converted the last kick of the half.

Points from Abaigh Cahill and Caoimhe Egan narrowed the gap to just a single score for Kildare and when Rafferty hit the net on 34 minutes, Kildare took the lead for the very first time.

As both management teams brought in fresh legs, the game remained at a deadlock at 1-7 to 1-7 for almost ten minutes before Kildare dealt the killer blow. Murnane struck 2-1 in four minutes to push Kildare out of sight, the second a long run up the left flank, finished to perfection with a solid left boot.