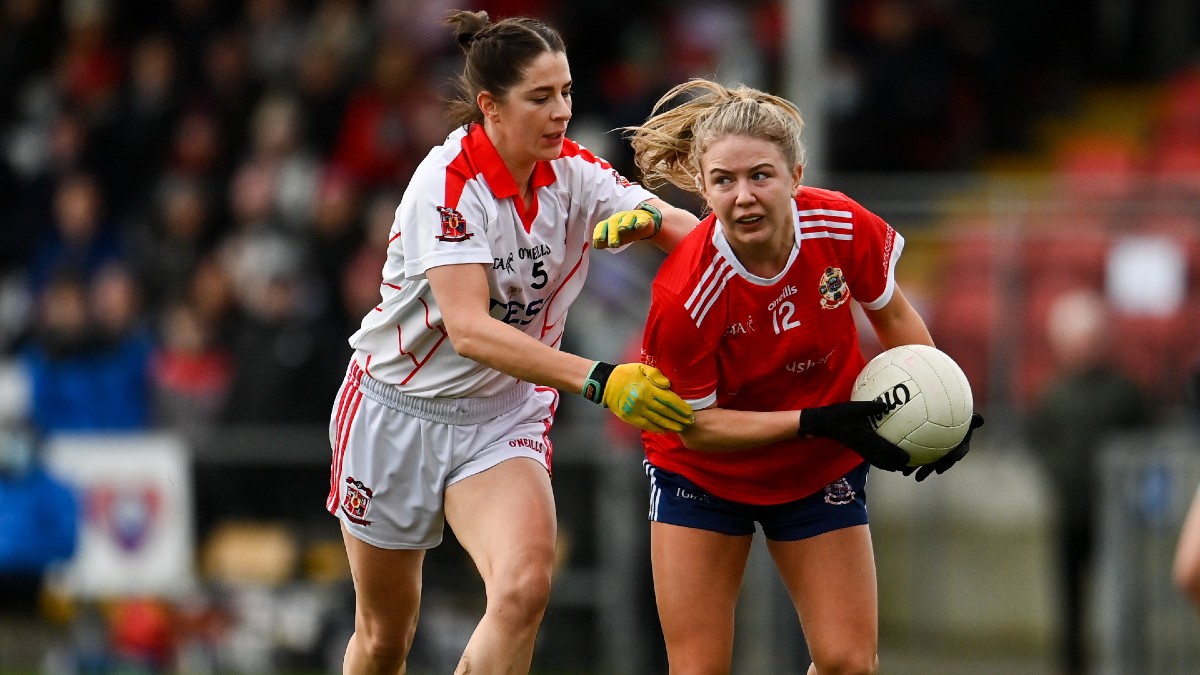 By DARREN KELLY (Lynsey Noone of Kilkerrin-Clonberne in action against Hazel Kingham of Donaghmoyne. Photo by Sam Barnes/Sportsfile)

Nicola Ward scored the vital goals and Kilkerrin-Clonberne moved through to the currentaccount.ie All-Ireland Senior final following this 2-8 to 0-8 victory over Monaghan’s Donaghmoyne.

Both goals arrived in the first half and the Galway champions took a six-point interval advantage that proved enough at the finish in Clonberne.

It was a cagey start from both teams before Kilkerrin-Clonberne made the breakthrough on seven minutes. Eva Noone found Ailish Morrissey down the right and she worked her way inside Joanne Geoghegan to open the scoring.

And the next attack involved a five-player move, started by Nicola Ward, including her sister Louise, Claire Dunleavy, Eva Noone and Chloe Miskell before Nicola Ward shot to the net to make it 1-1 to 0-0 on eight minutes.

Morrissey added another on 14 minutes, for a five-point advantage and Donaghmoyne opened their account with Cathriona McConnell on target moments later.

Despite struggling with a resolute Kilkerrin-Clonberne defence, Donaghmoyne were getting chances but Francie Coleman’s charges were guilty of three shots dropping short when they were within range.

Morrissey got her third from play before McConnell replied from a free but Kilkerrin-Clonberne moved clear, three minutes before the break.

Again, Nicola Ward bookended the move involving Louise Ward and Hannah Noone, the 2019 All-Star got around Fiona Courtney for her second goal.

Then a Louise Kerley free left Donaghmoyne 2-3 to 0-3 in arrears at half-time.

The visitors needed a strong third-quarter and got another McConnell free but then found themselves down to 14 players when Eimear Traynor received a yellow card for a foul on Hannah Noone.

Nevertheless, this triggered a Donaghmoyne comeback as McConnell led the resistance. She took Amanda Finnegan’s pass for a score from play before another free on 40 minutes had them 2-3 to 0-6 behind.

Morrissey responded for Kilkerrin-Clonberne but the momentum was with Donaghmoyne. Cora Courtney brought it back to three points, before she won a free which McConnell converted.

Donaghmoyne trailed 2-4 to 0-8 at the water break but they didn’t score again.  Olivia Divilly sent over two points for the victors before Eva Noone got on the scoreboard.

Divilly added another point from a free to wrap it up and Kilkerrin-Clonberne turned their attentions to Mourneabbey.