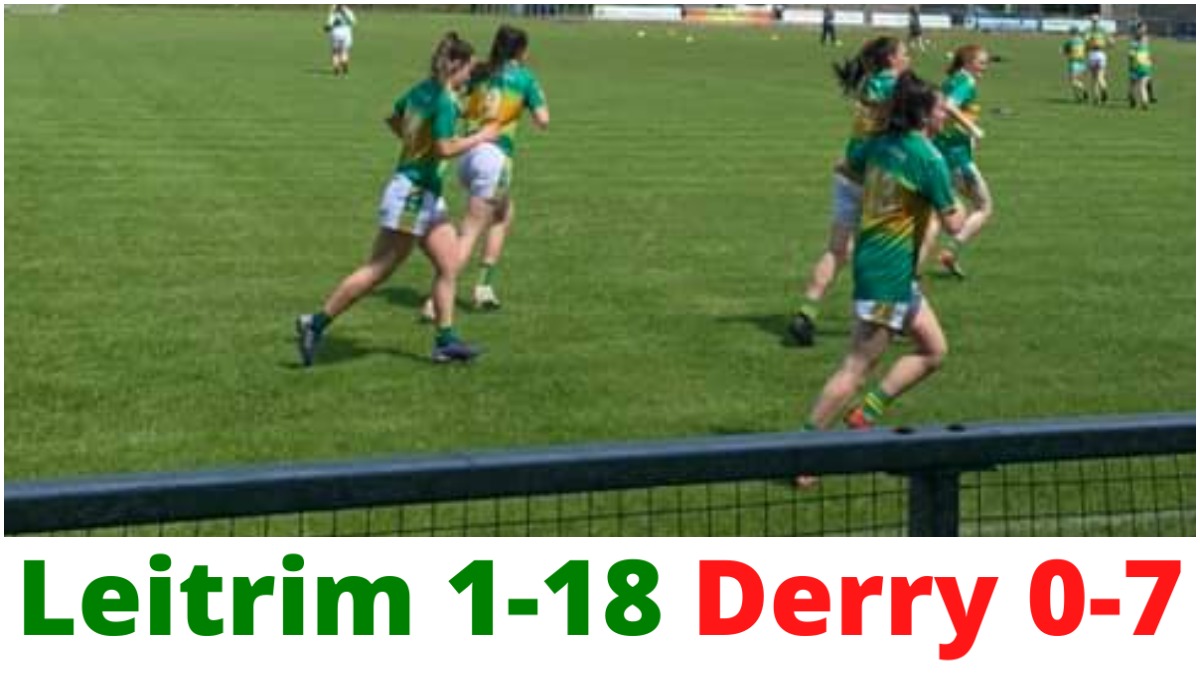 The scoreboard might suggest a “same as usual” scenario but there was more to this contest in sunny Ballinamore than a Leitrim walk in the park.

The hosts were deserving winners, punishing their opponents with 1-5 inside 11 minutes for a lead that never looked like being relinquished.  But while Derry supporters might show disdain in moral results, their two outings in 2021 suggests Odhran McNeilly hasn’t taken on a thankless task.

Indeed, for the first five minutes, it was the Oak Leafers launching attacks trying to set up full forward Ciara McGurk.  Katie Holly was busy in the middle but there were plenty of workers including Erin Doherty, Danielle Kivlehan and Áine McAllister testing the hosts.

But on a six pence, momentum shifted and the umpires beside Louise Gunn’s goal were kept occupied after Michelle Guckian opened Leitrim’s account on six minutes.

Leah Fox was already threatening and she linked with team mates to add two points before Laura O’Dowd, playing on her home turf, made it 0-4 to 0-0 on nine minutes.

The wing forward was one of two Ballinamore Sean O’Heslins stars on show and the other introduced herself within 60 seconds.  A Leitrim delivery bounced behind the Derry full back line and Roisin McHugh was on hand to strike the game’s only goal.

Shaylan Ward added a minor on 11 minutes making it 1-5 to 0-0.  This was quite simply the difference between the teams.  Possession might be nine-tenths of the law but this 50/50 start still created an eight-point divide.

Derry’s determination eventually yielded a reward as Doherty split the posts on 14 minutes.  Guckian was Leitrim’s top tallisplayer and she added afterwards before an Orla McGeough free left Derry’s deficit at 1-6 to 0-2 entering the first water break.

Guckian took Fox’s assist for a Leitrim point five minutes later before Derry had their best chance to throw this contest wide open.  Deirbhle McNicholl got in behind the defence on 22 minutes only to skew her shot left of the post as she tried to beat keeper Michelle Monaghan.

An advantage from a previous foul meant the Ulster side’s efforts weren’t in vain and McGeough put the free over the bar.  But Leitrim should have put this to bed in the 24th minute as Guckian was presented a clear shot only for the crossbar to save Derry’s blushes.

Holly found the target on 26 minutes meaning the red and white trailed by just six points closing in on the break but Guckian ensured Leitrim a 1-8 to 0-4 advantage at the break.

Like the first period, Derry knew a quick start was essential and they laid everything into the cause again but while McGurk was denied on 32 minutes, again, they couldn’t register a score.

O’Dowd got her second for Leitrim on 34 minutes before McGeough replied for Derry.  Two more Guckian scores, the second set up by Ailish Cornyn, had Leitrim 1-11 to 0-5 clear on 44 minutes.

What was of more concern for Leitrim three minutes earlier was the removal of full forward Fox through injury.  The Glencar-Manorhamilton took a heavy challenge when she looked certain to create a goal opportunity and both club and county will sweat on her fitness in the coming weeks.

However, Leitrim manager Hugh Donnelly appeared to deliver the hairdryer treatment to his troops before they resumed for the final quarter.  Leitrim boast a strong squad for 2021 and will challenge for league and championship silverware.

Muireann Devanney hasn’t broken back into the first team yet but that call appears inevitable as it also does for former Cavan All-Ireland winner Cornyn.  The two combined ruthlessly in the final 15 minutes as Leitrim dressed up the final result.

The final score went Derry’s way as Holly found the target.  In the corresponding fixture last year, 29 points separated these two teams.  The visitors went home having cut that deficit in half!

With two wins, Leitrim’s faith is in their own hands ahead of a trip to Antrim next Sunday (6th June).  Only a 14 point defeat can put their semi-final place under threat.