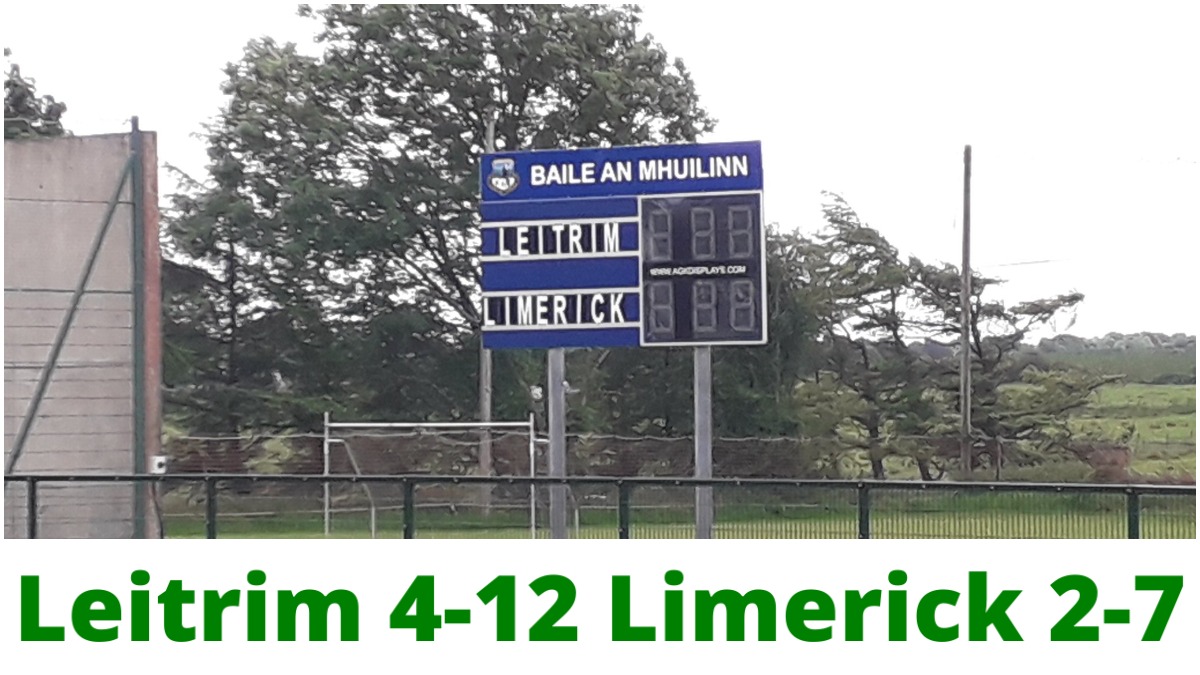 Leitrim’s perfect start to 2021 extended to four wins in successive weeks as they booked their place in the National League Final and moved with 60 minutes of promotion to Division 3.

Goals from Bronagh O’Rourke (2), Michelle Guckian and Elise Bruen gave Hugh Donnelly’s charges a buffer against their Munster opponents but Limerick goals from Irish Kennelly and Andrea O’Sullivan put some respectability on the scoreboard.

The Connacht outfit started as favourites thanks to their 100% record but it wasn’t just about their shooting that impressed the returning 100 spectators.  Their defenders worked hard to limit Limerick’s space while the link up in midfield belonged at a higher grade.

It took just 14 seconds for the opener as Ailbhe Clancy took possession from Guckian winning the throw-in to split the posts.  And despite being guilty of some poor misses, they gradually built an advantage going six ahead by the water break.

Guckian (3), Laura O’Dowd and Roisin McHugh, the latter thanks to Carla LeGuen’s left flank delivery, gave Leitrim a 0-6 to 0-0 lead.

Limerick were also gaining possessio but they struggled to get their inside players into the contest.  That being said, the attack exploited slight gaps in the opposing rearguard on occasions with Kennelly nearly setting up Amy Ryan on six minutes.

O’Dowd was directing traffic for Leitrim both ends of the field and was unlucky not to finish with her own major.  She was cruelly denied a shot on 17 minutes when advantage wasn’t given from referee Ciaran Groome but Guckian’s resulting free ensured a seven point cushion.

The training ground improvement by Leitrim was evident compared to their win over Derry two weeks earlier.  Moving the ball in defence to their 45, the middle third opened up the attack quickly, kicking into the full forward line.

A green flag looked on and it arrived on 20 minutes as O’Rourke was perfectly placed to beat her taller markers to the delivery before turning and kicking Leitrim’s first goal.

Ten points separated them but Limerick finally got off the mark in their next attack as wing back Megan Buckley pushed forward to split the posts and three minutes later, Katie Heelan made it 0-2 to 1-7.

However, the Shannonsiders’ work was undone with Leitrim’s next score.  McHugh picked out Guckian who struck her trademark goal and the margin was double digits again.

Ryan and Kennelly nearly arrested the slide again, combining to test Leitrim’s defensive credentials but their efforts were to no avail.  O’Rourke added to the leaders’ tally before in the final minute of normal time, O’Dowd’s cross was palmed to the net by Bruen and it was 3-8 to 0-2 at half-time.

Limerick came out for the second period determined to make an impression and over the 30+ minutes, they definitely salvaged some redemption ahead of their All-Ireland junior championship campaign in four weeks.  But Leitrim’s place against Louth in the league decider was never in doubt.

Clancy repeated the trick with another early score (this time needing 17 seconds) before Guckian won a foul which she converted on 34 minutes to stretch the lead.

Substitute Áine Cunningham gave Limerick a boost as the 2020 Junior Team of the Year star registered Limerick’s third point.  However, Leitrim ended any doubts to their winning status with the fourth major on 37 minutes.

Clancy and Guckian were the instigators and O’Rourke finished for her second three-pointer.  Guckian left it 4-11 to 0-3 at the water break.

Limerick finished the quarter with another goal chance but Kennelly’s shot was wide of the posts.  However, Donal Ryan’s charges played with abandon for the final 18 minutes and were rewarded for their endeavour.

On 46 minutes, Kennelly finally got the goal that eluded her all afternoon before Clancy gave Leitrim a 4-12 to 1-3 advantage.  That was the winners’ final score as Limerick concluded with 1-4 unanswered.

O’Sullivan assumed free taking duties and a kick on 53 minutes dropped underneath the crossbar for Limerick’s second goal.  She added two more placed balls before the finish while Kennelly and Heelan also contributed to give them second half bragging rights by 2-5 to 1-4.