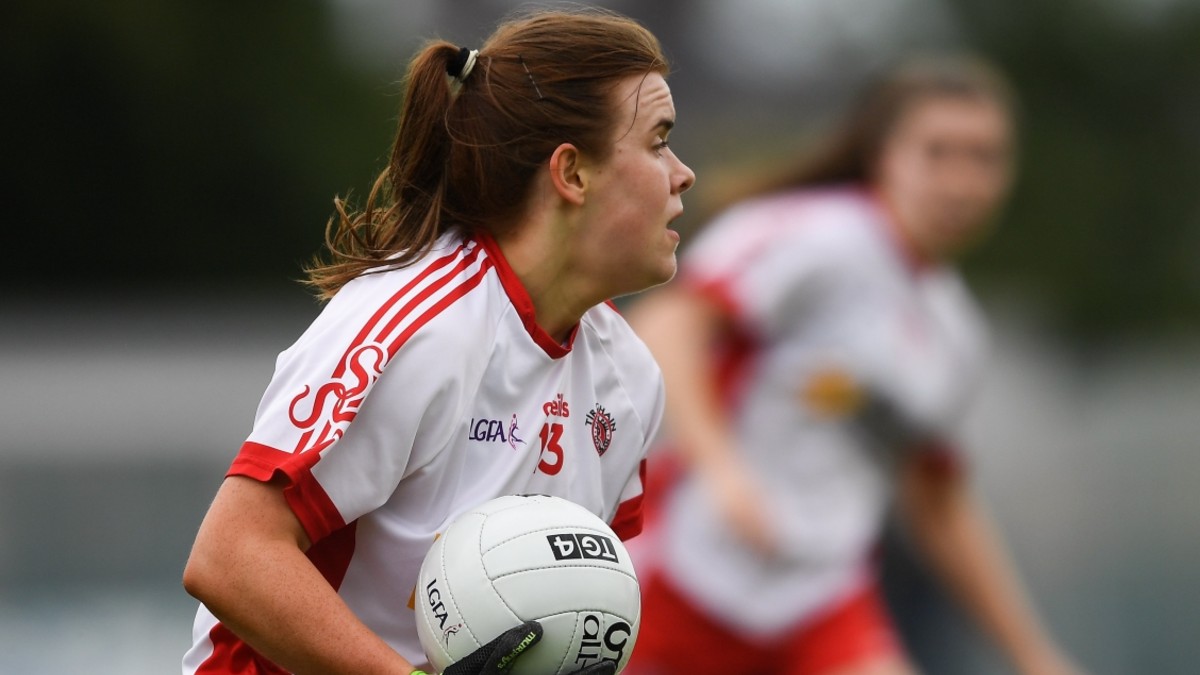 Compiled by John Fallon (Niamh O’Neill, seen here in action against Cork in the championship, who scored a hat-trick for Tyrone in their 11-7 to 0-11 win over Wexford in the Lidl NFL relegation play-off.  Photo (c) Sportsfile)

Tyrone preserved their Division 2 status in the Lidl Ladies National Football League on Sunday as Wexford were consigned to Division 3 for 2022.

Tyrone went on a goal rampage at Lannleire GFC in Dunleer, shooting seven in the opening half and following with four more to ease to a 11-7 to 0-11 victory.

McCaffrey got both her goals in the opening 12 minutes, with O’Neill striking her first in between, and that left Wexford chasing from the opening quarter and they rarely looked like responding with goals.

Caitriona Murray did her best to keep them in the hunt but Tyrone had the issue wrapped up by the break as McHugh, Hughes, McGirr and O’Neill again found the net.

A couple of points from Murray reduced the margin after the restart but Tyrone pulled away again with McGirr getting her second, O’Neill completing her hat-trick and substitutes Regan Fahy and Grainne Rafferty also finding the net.

In Division 3, meanwhile, Wicklow won the fight to stay up, as Fermanagh were relegated to Division 4 on a 1-13 to 1-12 scoreline.

In what was a repeat of the 2020 TG4 All-Ireland Junior Final, Marie Kealy was the key player as she hit 1-8 for Wicklow.

Appropriately, it was the Baltinglass player who landed the winner when she pointed late in an exciting game at Kinnegad where the lead changed hands several times.

Kealy’s goal hauled back a Fermanagh side who had raced into a 0-4 to 0-0 lead after eight minutes and they pushed on to lead by 1-6 to 0-5 at the break.

But the impressive Eimear Smyth struck for a goal shortly after the restart and Fermanagh got back on level terms at 1-8 apiece when Joanne Doonan pointed after 39 minutes.

A couple of more points from Smyth before she picked up a yellow card helped them lead by a goal with 13 minutes remaining but Wicklow got the next four points from Maeve Deeney (two), Kealy and Sarah Delahunt to edge in front. Sarah McCausland levelled for Fermanagh but Kealy had the final say to win it for Wicklow.

Elsewhere at the weekend, Armagh advanced to a TG4 Ulster Senior Championship semi-final meeting with Tyrone.

On Friday night at the Athletic Grounds, Armagh scored a 2-18 to 0-10 win over Monaghan, with Alex Clarke and Blaithin Mackin getting the goals.

And on Saturday, Donegal booked their place in the final with Geraldine McLaughlin scoring 2-8 as they beat Cavan by 6-16 to 2-17.