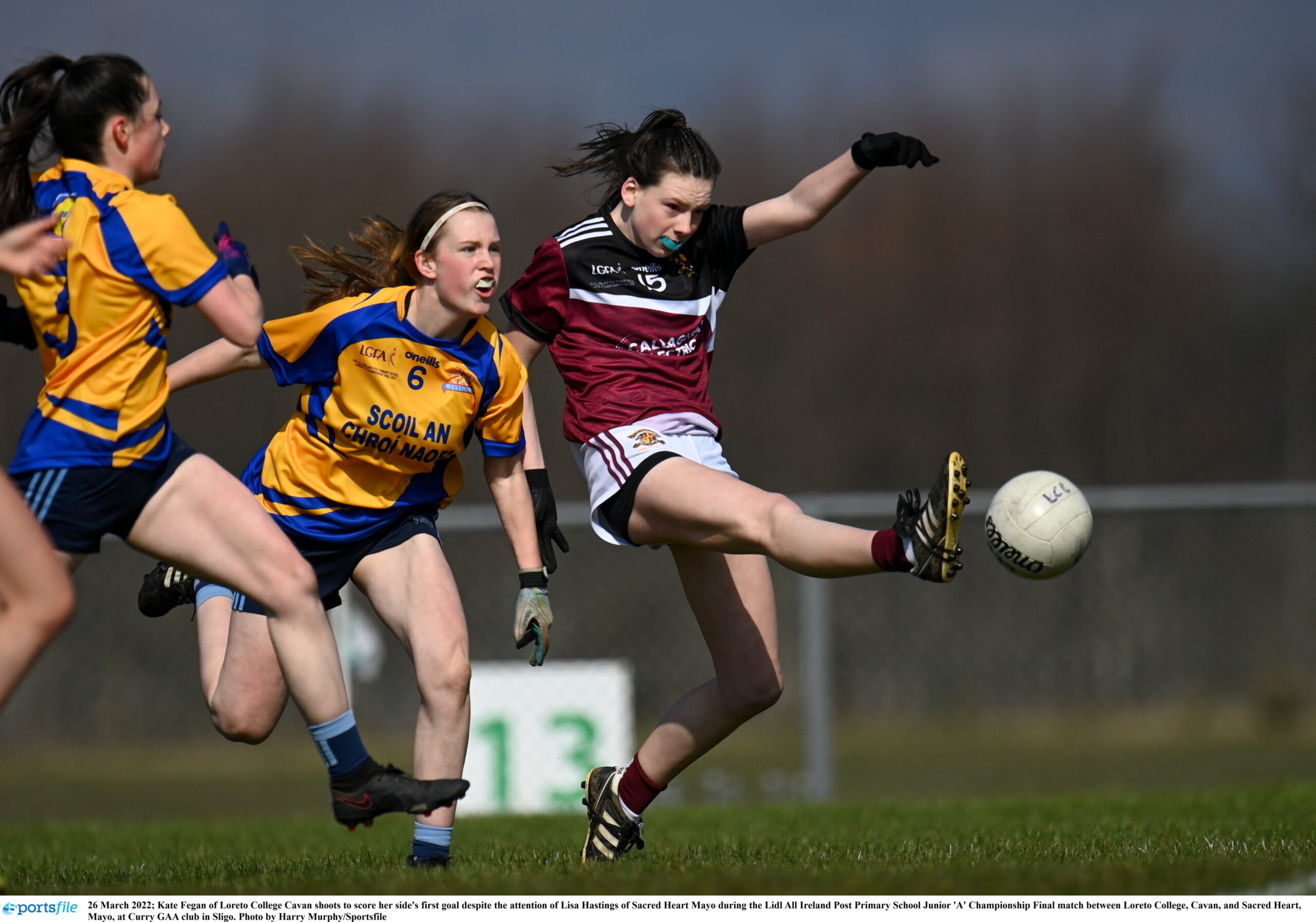 By DARAGH SMALL (Kate Fegan of Loreto College Cavan shoots to score her side’s first goal despite the attention of Lisa Hastings of Sacred Heart Mayo. Photo by Harry Murphy/Sportsfile)

Fegan was outstanding and with further goals from Clodagh Clarke (two) and Emma McIntyre Loreto cruised to victory at the Curry GAA Grounds in Sligo.

Loreto were brilliant in the first half and they made their intent clear from the outset. The Cavan school has scored seven goals in their All-Ireland semi-final win and were 5-5 to 2-6 in front at half-time.

The Ulster champions also took a 3-2 to 1-1 lead into the first water break although it was Sacred Heart who struck the first goal. The brilliant Fegan opened her account after two minutes, before Ava Palasz looped her shot over the head of Orla McCabe and into the Loreto net.

But Loreto scored 1-2 in the next three minutes with Fegan on target for their first goal, after Ailbhe Kennedy intercepted the kickout and set her up. Clodagh Clarke gave the assist for Fegan again, in the 14th minute, and Loreto were already well in control by the water break.

Saoirse Byrne, Aoife Gannon and Chloe Chambers combined for the first three points on the resumption but Sacred Heart still trailed by 3-2 to 1-4 with ten minutes of the first half remaining.

Fegan turned provider for Clarke’s goal moments later and Clarke scored her second goal in the 28th minute. Fegan added a couple of points before half-time and her team were 5-5 to 2-6 in front at interval.

Loreto’s prolific attack was held at bay for much of the second half but they opened up with scores from Sarah Clarke, Fegan and half-time substitute Katie O’Meara, to push them into an unassailable 5-8 to 2-6 lead.

Loreto were 5-9 to 2-8 in front at the final water break and despite early points from Ava Kelly and Byrne, in the final quarter, Sacred Heart could not find a route through to goal.