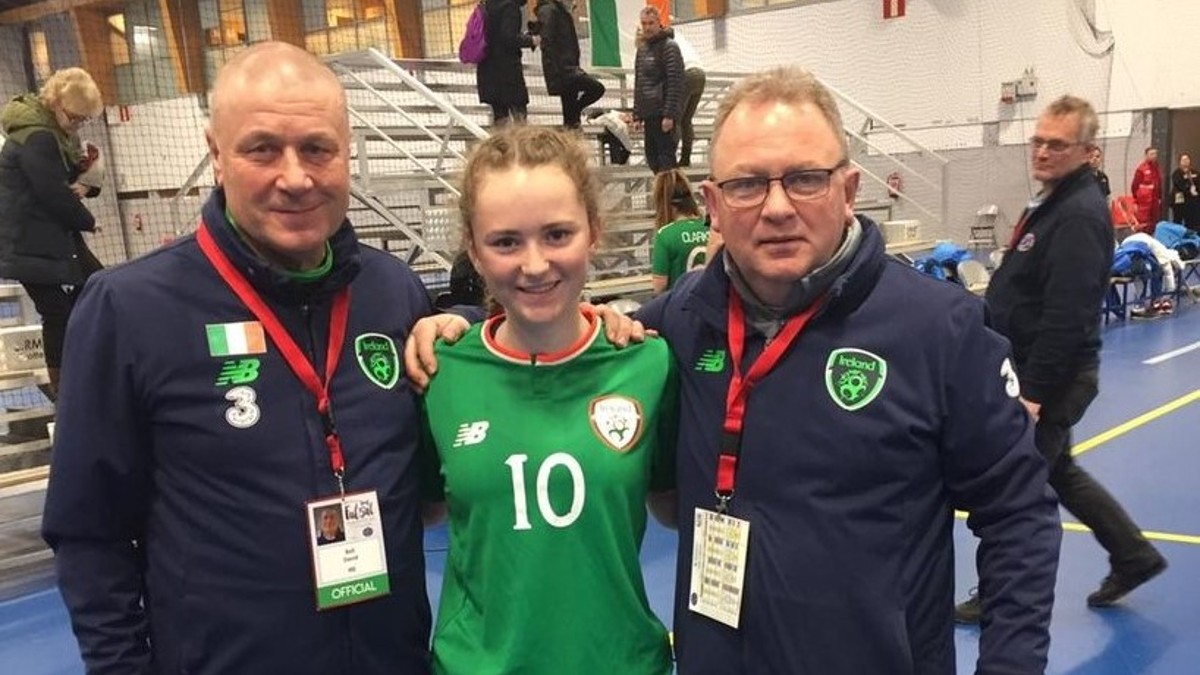 Aisling Hanly’s world falls silent at night, she won’t hear another sound until she puts her cochlear implants back in in the morning.

She was born profoundly deaf, eight years after her sister, Róisín, who received the same diagnosis.

But neither sibling have let it define them, and with the help of the Cochlear Nucleus Implant System, Aisling has gone on to represent Roscommon in Ladies football and Ireland in Futsal.

She has a Nucleus Smart app on her phone which allows her to connect to her implant via Bluetooth. Then, when a call comes through, she hears the audio directly from the phone, removing background noise.

The 17-year-old is in fifth year at the Convent of Mercy secondary school in Roscommon, and when she is in the classroom she is able to listen directly to the teachers. They wear a special microphone that goes straight into her implant as well.

“I’m so grateful for the implant. It’s class,” said Hanly.

“In school, the microphone is unreal. Other students in the class mightn’t even hear the teacher sometimes and they will say: ‘Aisling, what did they say?’

“They know I definitely heard the teacher because the teacher’s voice goes straight into my head, whereas the others could be talking to other people and trying to listen to the teacher at the same time.”

But there were two brain surgeries to get Aisling to this point, and she was lucky to have received her diagnosis so early. She was just three months old when it was identified that she was profoundly deaf.

Beaumont Hospital were screening the new-born siblings of deaf patients, and while Aisling’s older brother Seán was born five years earlier without issue, the two sisters would face into the same unknown.

On the first occasion, Liz Hanly had to bury her mother on the Tuesday and then on Thursday bring her daughter, Róisín, to Beaumont Hospital for an appointment to determine her level of deafness.

“It was a very difficult time, we knew zilch about it,” said Liz Hanly.

“At that stage the term cochlear implant was just foreign to us. Róisín had the brainstem electrical response which is the ultimate test that they do where they hook up electrodes to her head. That is what determines how severe it is and it is under a general anaesthetic.

“I still clearly remember talking to the surgeon as she was waking up from the anaesthetic. She was crying and the surgeon said, to me that does not sound like the cry of a deaf baby but all of the results are showing she is profoundly deaf.”

The surgeon suggested a new procedure called cochlear implant surgery and that Róisín may be a candidate for it. Parents Liz and Colman were delighted to have the technology available for their daughters. And when it came to Aisling, she had her first surgery a month before her second birthday.

She had the implant put inside her head from her right ear. In that implant, were 26 electrodes. For a completely successful implant, they needed to be able to implant all of the electrodes and they all had to work.

Luckily they did and a month after surgery, when the wound healed, they attached the external part of the implant which is a coil the size of a €2 coin, and that is attached to a little wire which goes to what looks like a hearing aid, which goes up her ear.

Even with this amazing piece of equipment, Aisling could still only hear out of her right ear until she was 13. She got her second surgery then and now she is a bilateral cochlear implant user.

“As a parent at the start, it’s easy for me to say now, but I advise you have to accept it, acceptance is number one. Once you accept it, take all of the supports that are being offered, don’t be too proud, take what’s available,” said Liz Hanly.

“Luckily Aisling’s personality has stood to her because she is so determined and anything she wants to achieve, she goes and does it. You have no choice, you can let it beat you or you can go with it and do what you need to do to overcome it.

“But it wasn’t easy to do it the second time. We tackled Róisín head on and Seán came along fine and you are just about to rest on your laurels and then you have to start all over again. But it was a help to have gone through it.”

Róisín turned out to be a model student and she is a qualified mental health nurse. Aisling followed suit and excelled with her studies while she was an outstanding talent on the football field too.

She is a star of the Kilbride Ladies football team and went on to make her debut for the Roscommon intermediates in the first round of the Lidl NFL against Fermanagh last May.

Hanly, who wears a rugby scrumcap to prevent any blows to the head, has a really bright future at her fingertips.

“At a younger age, she was conscious of wearing the cap and looking a little bit different but she has 52 electrodes in her head. A bang to the head could be very, very serious,” said Liz Hanly.

“We, as parents, had to say very early on, when we knew she had a flair for football, we just said: ‘Aisling if you play you have to wear this.’ She just accepted that, it was wear it or not play.”

And the scrumcap hasn’t held her back ,while a few visits to the local community centre in Kilteevan eventually resulted in a soccer career that has seen her receive international honours.

Hanly played with St John’s Athletic FC, CP Ajax and Athlone Town before she featured for a couple of regional teams.

Hanly was scouted for Ireland U15 trials and got to the final stages of that but missed out before she was made aware of an opportunity to link up with the Irish Women’s Deaf Futsal team.

But Covid-19 put a halt to her soccer plans and she will focus on the primrose and blue again in 2022. She is excited about working with new manager, Ollie Lennon.

“I’m really look forward to playing with Roscommon again this year, playing with my county has been my dream since I was five or six,” says Aisling.

“I have always been looking up to players like Sinéad Goldrick, Niamh McEvoy, Cora Staunton, Sarah Rowe, all those playing in Croke Park because I really want to play there.

“But I’m really looking forward to another year with Roscommon, especially with a new manager and new players coming in.

“I feel like things are on the up and things are going to get better.”