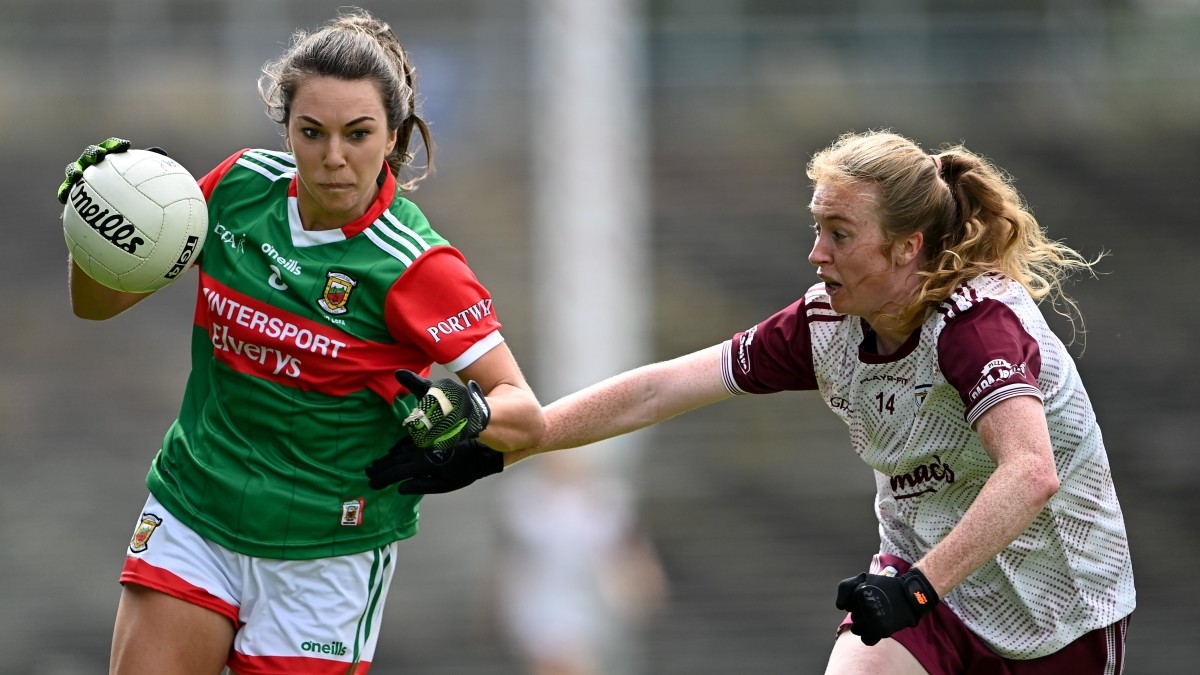 By DARAGH SMALL (Niamh Kelly of Mayo in action against Louise Ward of Galway in Castlebar. Photo by Piaras Ó Mídheach/Sportsfile)

Sinéad Cafferky fired 1-2 from midfield as Mayo advanced to the semi-finals of the TG4 All-Ireland Senior Championship with a deserved victory over Connacht rivals Galway at MacHale Park in Castlebar.

Mayo suffered an 11-point defeat to Armagh last weekend but bounced back impressively to cruise into the final four after they held a 1-10 to 0-5 lead at half-time.

Cafferky scored the first-half goal to put the hosts in charge at the interval and although Mairéad Seoighe shot to the Mayo net in the second half they couldn’t find an adequate comeback.

Mayo manager Michael Moyles made four late changes and one of those almost made an instant impact when Lisa Cafferky forced a great save from Galway goalkeeper Dearbhla Gower.

Mayo were still 0-5 to 0-2 ahead at the first water break. They scored the first three points through Shauna Howley, Grace Kelly and Rachel Kearns.

Kate Slevin finally hit back for Galway in the ninth minute and she doubled her tally, while Sarah Rowe and Howley both added good points up the other end.

Mayo started the second quarter with another three unanswered points, with Kearns, Howley and Rowe all on target.

Megan Glynn and Leanne Coen looked to have started a Galway revival with good points, but Rowe scored her third, before Sinéad Cafferky grabbed the crucial goal in the 23rd minute.

The Kilmovee Shamrocks star burst through from midfield and when everyone expected her to pass she instead drove the ball low into the bottom righthand corner of the Galway net.

With Galway in need of a score Olivia Divilly scored her first point, but Sinéad Cafferky brought her first half tally to 1-1 in reply. Mayo were eight points clear at the end of the first half and that margin quickly became nine thanks to Grace Kelly’s score.

Goalkeeper Laura Brennan came up with stunning saves to deny Olivia Divilly and Glynn after the restart, and while Galway tried to stay in touch courtesy of points from Ailbhe Davoren and Seoighe they were cancelled out by Sinéad Cafferky and Kearns.

Galway were 1-13 to 0-7 behind before Seoighe stepped up to blast the ball past Brennan in the 45th minute, a move she was twice involved in, but Howley landed an important reply for Mayo just before the final water break.

Louise Ward (two), Ailish Morrissey and Seoighe cut into the deficit and Galway only trailed by a goal with less than ten minutes remaining, but they couldn’t conjure the goal they needed and Lisa Cafferky sealed the win late on.