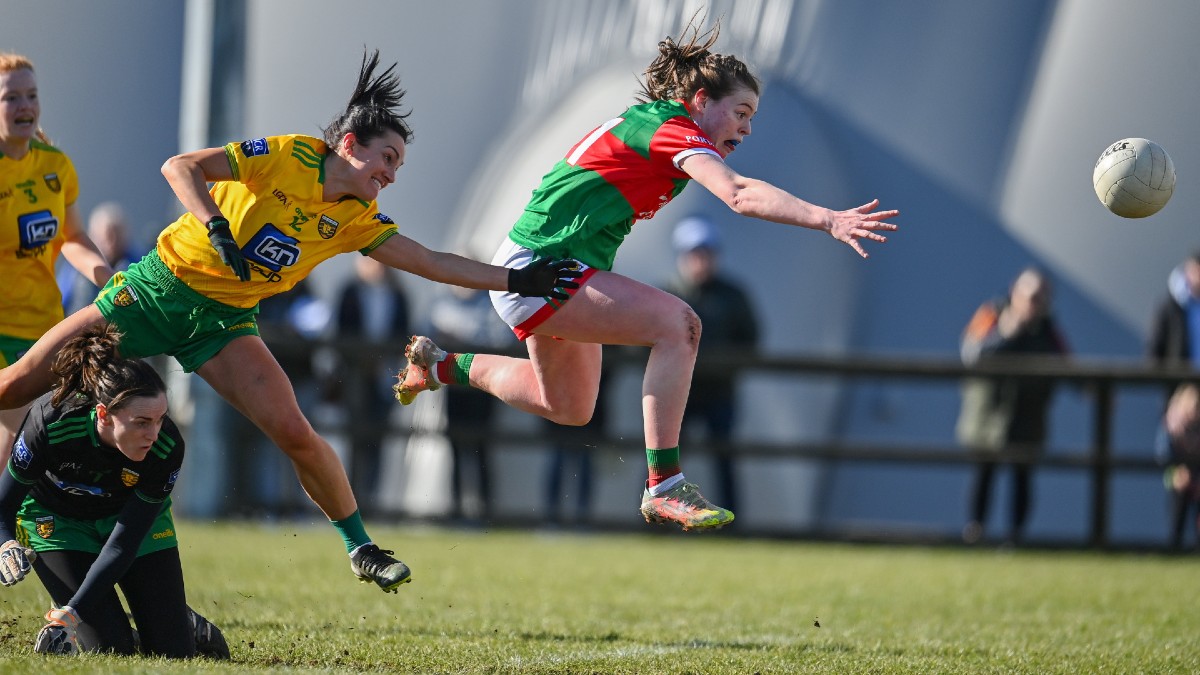 By AISLING CLERY (Sinead Walsh of Mayo scores her side’s first goal despite the efforts of Shelly Twohig of Donegal, left, and Donegal goalkeeper Roisin McCafferty. Photo by Sam Barnes/Sportsfile)

Sinéad Walsh and Shauna Howley scored the goals and Mayo topped the Lidl National Football League Division 1A table after victory over Donegal at the Connacht Centre of Excellence.

A strong second quarter from Michael Moyles’ side meant they led by 2-4 to 1-2 at the break despite Shelly Twohig’s goal. Donegal found it difficult to get into good scoring positions but the introduction of Yvonne Bonner and Katy Herron gave their attack a much needed boost. However, Mayo had the edge and they will go on to face Meath in the semi-final on 19 March with Donegal set to take on holders Dublin.

The opening quarter was end-to-end and Donegal were first to strike on four minutes when Karen Guthrie passed to Susanne White and she scored. Walsh levelled the game with a terrific effort five minutes later while points from Sarah Mulvihill and Lisa Cafferky pushed Mayo into a two-point advantage at the first water break.

Mayo dominated afterwards and struck the first of their goals on 16 minutes. A long ball from Mulvihill was picked up by Walsh, she cut in behind the Donegal defence and found the net.

With Mayo’s half-back line pushing up on the Donegal defence, their scores continued. Sinéad Cafferky scored after good work from Fiona McHale while Kathryn O’Sullivan’s bravery resulted in Mayo’s second goal. She won back possession and sent the ball through the Mayo attack, and a sweeping team move led to Howley finishing to the net.

Donegal were struggling but Guthrie did convert a 28th minute free. Immediately on the resumption, Twohig got the ball and found a way past Mayo goalkeeper Laura Brennan for the final score of the half. Donegal trailed by five at the interval.

Substitute Bonner made an immediate impact as she converted the first free of the half while Howley scored a long-range free for Mayo. Two Guthrie points brought Donegal right back into it and a second Bonner point just before the water break, left only two points between the teams with Mayo 2-5 to 1-6 in front.

But Mayo retained possession on the restart and Aoife Geraghty’s point pushed them three clear. A Howley free increased the lead further and although Guthrie did bring Donegal back to within three, Mayo’s defence overturned the ball and they hung on to claim top spot.