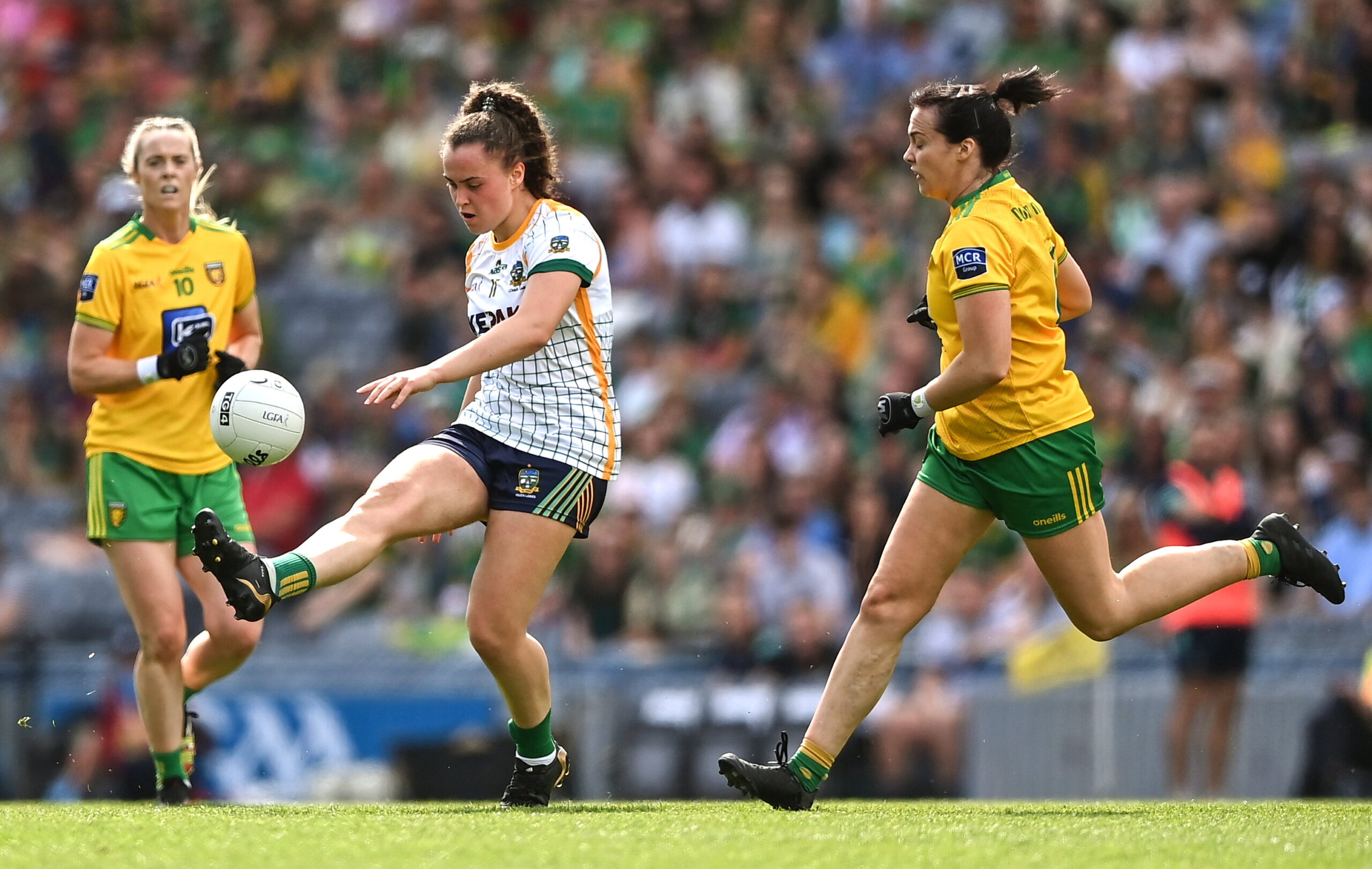 By Daire Walsh (Emma Duggan of Meath in action against Nicole McLaughlin of Donegal. Photo by Piaras Ó Mídheach/Sportsfile)

Following her last-gasp point to earn the Royals victory at the expense of Galway last Saturday, the Dunboyne ace kicked three points inside the closing ten minutes to propel her side towards a decider with Kerry on 31 July.

A resolute Donegal – who dethroned Leinster champions Dublin in the last-eight – pushed the holders every inch of the way but their quest for a first senior final will continue into 2023.

TG4 All-Star Geraldine McLaughlin found the target either side of a Stacey Grimes free to give Donegal a slender advantage in a tentative opening.

Although Grimes went on to level matters with her second point, Donegal signalled their intent during the second-quarter of a tense affair. A fierce effort by Niamh McLaughlin rattled the woodwork on its way over the bar and the same player also scored a goal from a penalty after veteran attacker Yvonne Bonner was hauled down in the 19th minute.

While Orlagh Lally split the uprights for Meath towards the end of the half, Donegal were three points to the good, 1-3 to 0-3, heading in at the half-time break.

Yet, this lead was whittled down to the bare minimum within 60 seconds of the restart as Vikki Wall and Niamh O’Sullivan posted quickfire scores. Despite losing Máire O’Shaughnessy to the sin-bin, Meath moved three points clear with unanswered efforts from Emma Duggan and Grimes (three).

Donegal finally opened their second-half account with a Yvonne Bonner point in the 43rd minute, however, and midfielder Katie Herron also chipped in with a fine score on the run to set-up a nerve-wracking conclusion.

The sides were back level as a result of Bonner’s second point of the half and with Wall being yellow-carded on the stroke of 50 minutes, all the momentum appeared to be with Donegal. Once again, though, Meath brushed off their numerical deficiency to push forward for another hard-earned victory.

After kicking an outstanding point from play, Duggan also knocked over a tricky free to edge them a step closer to another top-tier final. A Karen Guthrie free kept Donegal in touch, but Duggan’s fourth of the day, off a late breakaway move, ensured Meath are still in the hunt for back-to-back Brendan Martin Cups.