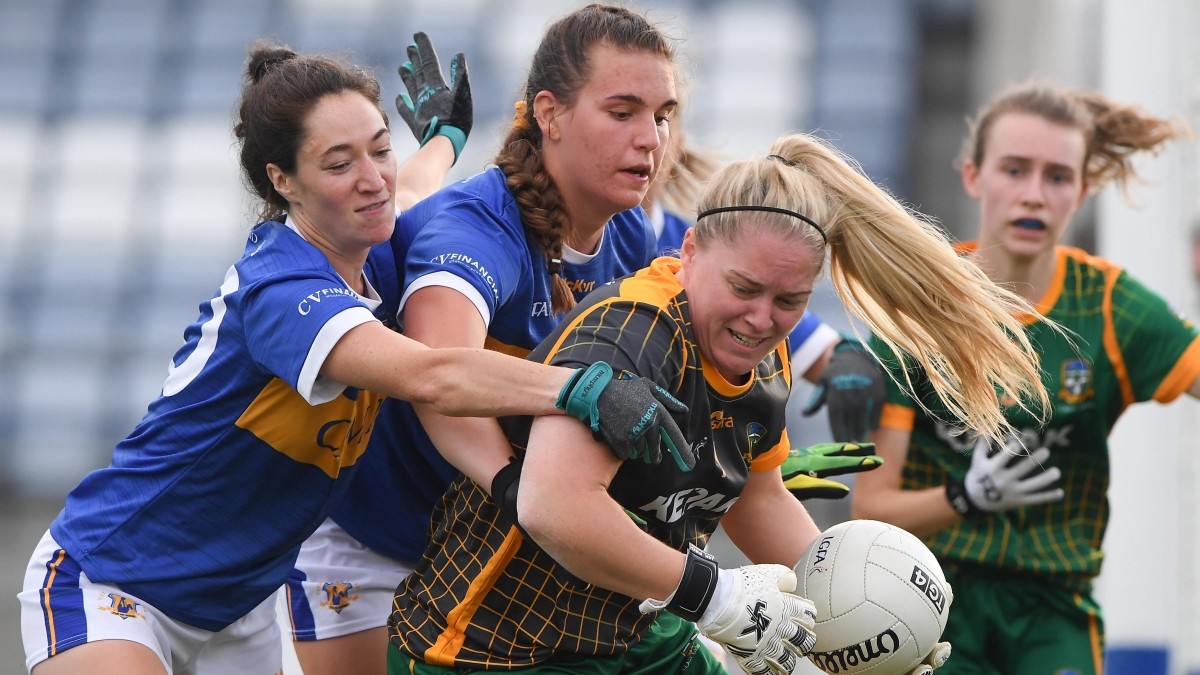 By Fergal Lynch (Monica McGuirk of Meath in action against Cliona O’Dwyer and Caitlin Kennedy of Tipperary during the TG4 All-Ireland Senior Ladies Football Championship Group 2 Round 3 match between Meath and Tipperary at MW Hire O’Moore Park in Portlaoise, Co Laois. Photo by Matt Browne/Sportsfile)

Meath survived a stern third-quarter test but passed with flying colours to advance to the knock-out stages of the TG4 All-Ireland Senior Championship with an impressive victory over Tipperary in Portlaoise.

Leading by 0-12 to 0-4 at half-time, Meath were pegged back to five points by Tipperary, but a wonder goal from Vikki Wall settled Eamonn Murray’s charges and they pulled clear in the closing stages.

Victory means Meath will face either Mayo or Armagh in the quarter final, while Tipperary face a nervy relegation play-off.

Meath started in blistering fashion and were off the mark within seconds with Emma Duggan opening the scoring.

Less than three minutes later Duggan set up Aoibhin Cleary to double Meath’s lead and they continued to dominate with Duggan posting two more points, one free, to stretch Meath’s lead to 0-4 to 0-0 after eight minutes.

When Niamh O’Sullivan got in on the scoring act it looked set to be a long evening for Tipperary, a score that pushed Meath eight points clear.

Orla O’Dwyer did get her side up and running with the last kick before the water break and with stern words from their manager Declan Carr ringing in their ears Tipperary improved in the second quarter.

Despite their improvement it was two points from Duggan either side of an Ava Fennessy score that stretched Meath’s lead to 0-10 to 0-2, but Tipperary did apply more pressure with Angela McGuigan converting a free, although she did drop another short.

Meath replied with scores from Grimes (free) and Cleary, but it was Cliona O’Dwyer who had the first real goal chance as she fired over from close range to make it 0-12 to 0-4 at half-time.

Tipperary upped the tempo when play resumed. Caitlin Kennedy forced Monica McGuirk into a fine save before McGuigan converted a free. All of a sudden Meath were struggling to get out of their own half, but three Tipp wides in as many minutes eased the pressure, before McGuigan added her third free.

Another good save by McGuirk denied Niamh Hayes, but when Anna Rose Kennedy lofted over a super point to make it 0-12 to 0-7, Tipperary had Meath concerned.

However, the Munster side failed to score again and after the water break Meath took charge. Wall’s stunning goal refocused the team and they added points from Aoibheann Leahy, O’Sullivan, Wall, Megan Thynne and Grimes to run out comfortable winners.