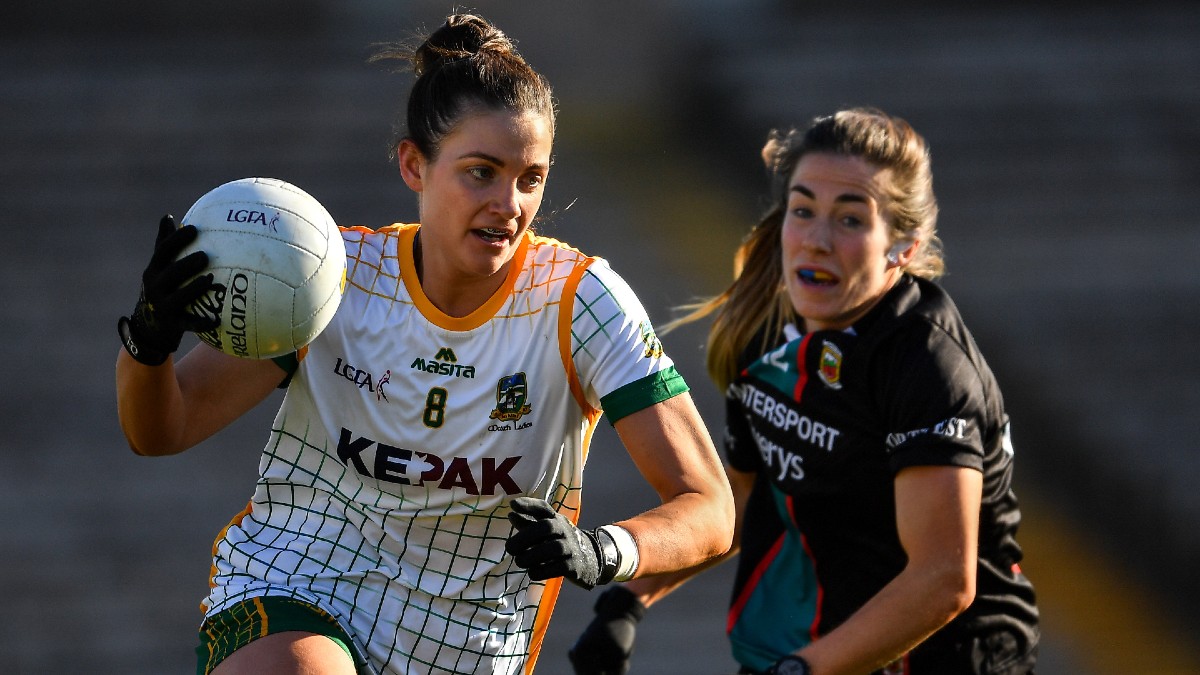 By AISLING CLERY (Máire O’Shaughnessy of Meath in action against Sarah Mulvihill of Mayo. Photo by Ray McManus/Sportsfile)

Orlagh Lally scored 1-2 as Meath advanced to the Lidl NFL Division 1 final at the expense of Mayo at St Tiernach’s Park in Clones.

It’s a first Division 1 decider for the Royals since 2006 on a day where Kelsey Nesbitt scored their other goal.

In a highly contested semi-final, it was Michael Moyles’ Mayo side that led by 0-7 to 0-4 at the half-time break. However, a strong wind that blew throughout the contest was best used by the reigning TG4 All-Ireland champions. Meath hit 2-8 in that second half to ensure the success story continues.

Lisa Cafferky got the game’s opening score but a Stacey Grimes free cancelled that out two minutes later. Mayo were dominating possession and a long range point from Shauna Howley saw them take the lead.

Meath were unlucky not to get back in front as a quick Grimes free to Nesbitt forced a save from Aisling Tarpey. Mayo were reduced to 14 when Aoife Geraghty was sin binned for a challenge on Vikki Wall but a Howley free sent Mayo into the water break leading by 0-3 to 0-1.

Megan Thynne reduced Meath’s deficit to one after a team move involving Lally, Maire O’Shaughnessy and Wall. Shauna Howley converted her second free but on the resumption this was cancelled out by Emma Duggan.

A Howley free and a second Lisa Cafferky point pushed Meath into a four-point lead on 22 minutes before Duggan got her second point of the contest from distance. A Sinead Cafferky point meant Mayo led by three at half-time.

But the floodgates opened as the second half got underway with Meath hitting 2-5 unanswered in the first ten minutes to seize control. Nesbitt finished to the net for Meath’s first goal on 35 minutes while a super pass from Wall set up Lally and she rifled to the net on 40 minutes to push the Royals into an eight-point advantage.

Mayo refused to give in and they got back into contention when Lisa Cafferky fired scored a goal in the 43rd minute. Points from Aoife Geraghty and substitute Ciara Needham reduced the deficit to three points. Duggan tagged on her fourth point and at the second half water break Meath led by 2-10 to 1-9.

In the final quarter, Mayo piled on the pressure but the Meath defence was unrelenting and with Katie Newe, Mary Kate Lynch and Shauna Ennis smothering Mayo attacks, they held on. Late points from substitute Emma White and Lally ensured the Royals march on to Croke Park once more.

“I was at the league final in 2006, it broke my heart,” said Meath manager Eamonn Murray.

“We were robbed that day, it was a game we should have won. We all know what happened after that game, Cork went on to win and we went to the bottom.

“(The first ten minutes of the second half today) was magic. That’s the best football we’ve played ever really. We showed what we can do.

“We won’t take this for granted at all, far from it. A national final, we are really looking forward to it. I didn’t think we’d get back to Croke Park just as quick as this.

“I’m so proud of Kelsey that she’s back and in Croke Park. This is for her.”