FOOTBALL: Mícheál Naughton takes over as President of the Ladies Gaelic Football Association 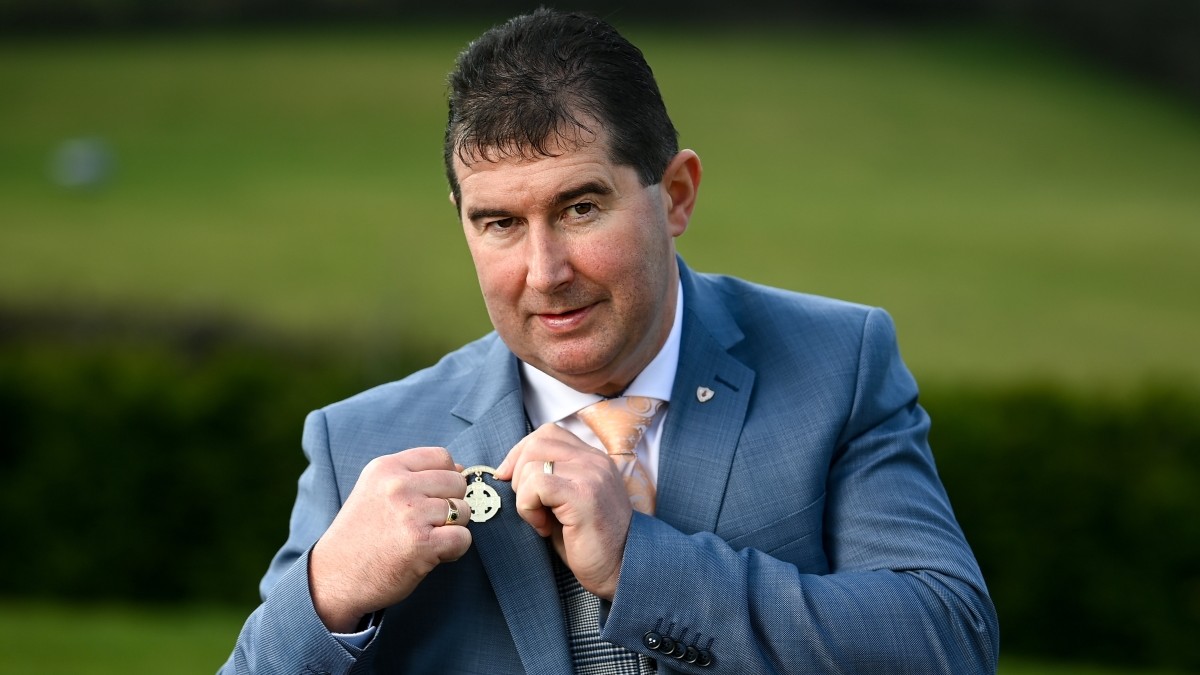 (Mícheál Naughton, Uachtarán, LGFA, after being presented with his Presidential medal by his wife, Annette, at the family home in county Donegal. Mícheál Naughton was inaugurated as the new President of the Ladies Gaelic Football Association at 2020 Annual Congress, which was held remotely due to Covid-19 restrictions. Photo by Stephen McCarthy/Sportsfile)

MÍCHEÁL Naughton is the new President of the Ladies Gaelic Football Association.

The Sligo native, representing Donegal and Ulster, took over the position from outgoing Marie Hickey, who had served six years at the helm, at today’s virtual Annual Congress.

A successful businessman, and working in the hotel industry, Naughton is the 13th different President of the LGFA since its inception in 1974.

Naughton will now preside for the next four years – and lead the LGFA into its 50th year in existence in 2024.

Laois native Marie Hickey completed her second three-year stint before handing over the reins to Naughton.

Hailing from West Sligo, but based in Donegal for over 23 years, Micheál Naughton is a former Donegal and Ulster Council Chairperson who also managed the Donegal Ladies Senior Football team.

Affiliated to the Four Masters club, Naughton guided Donegal to the 2010 TG4 All-Ireland Intermediate crown during her first stint in charge, before returning to preside over a 2016 Lidl National League Division 2 title win.

Mícheál is married to Annette, and they are the proud parents of daughter, Erin.

Speaking at today’s Annual Congress, Naughton said: “I will always do my utmost to continue the good work that has already been done. I will continue to champion one of the fastest growing female sports in Europe.

“We’re not the finished article but we’ve built an Association that we should be very proud of.

“We need to focus on our biggest asset – our players. In my term as President, I would love to see Croke Park at full capacity for All-Ireland Final Day.

“Looking forward to the next four years, I want to continue on the great work and collaboration with the GAA and Camogie Association. I want to forge greater links and bonds.”

In her final speech as President, Marie Hickey said: “Our links with the GAA and Camogie Association have never been stronger at national level. This will continue to improve as we work towards a federal system of governance.

“This is a time for great reflection – it has been an incredible journey.”