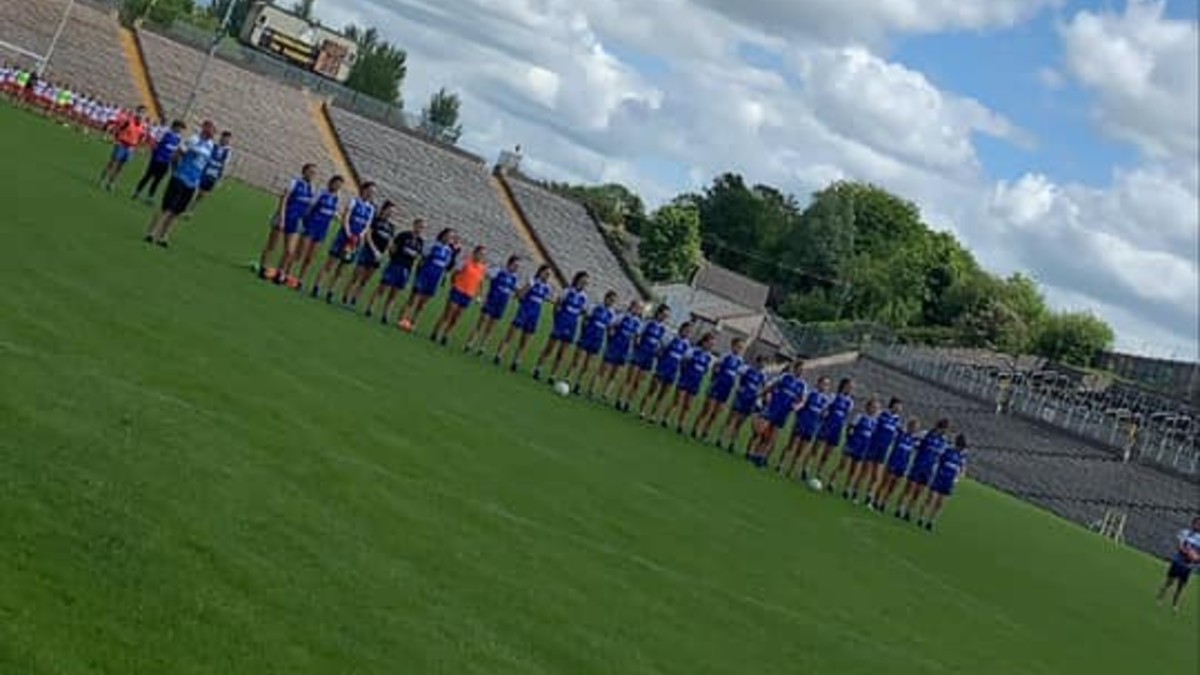 For many, this was this year’s league’s group of death and with three contenders set to clash again come the championship; attention has already switched to the summer threats provided by three Ulster counties when they lock horns with Mayo in July.

Cavan topped Division 2B while Armagh were squeezed out (three one-point ball games but the wrong side of two).  And Monaghan gave a timely reminder that last year’s good vibes was no fluke.

Tyrone are still in recovering from a poor 2020 but they were contenders in their previous two losses.  But on a hot summer’s day perfect for football in Clones, they were blown away by a Farney storm that decided this contest before the first water break.

Monaghan’s semi-final status was still in their own hands but an 11-point margin may have been required to book their clash with Kerry.  They played like they wanted to leave nothing and reached their goal by the 13th minute.

Laura McEnaney opened on 20 seconds but Tyrone replied by the second minute as Chloe McCaffrey split the posts.  That was it for the Red Hands who were chasing the game following the next attack.

Ciara McAnespie and Ellen McCarron were part of a deadly attacking unit on form this afternoon.  And they happily allowed the supporting cast share their fortune as the former’s cross field ball on three minutes allowed wing back Shauna Coyle get the first goal.

They didn’t relent!  McCarron sent over a placed ball before Cora Courtney did the same. On seven minutes, Courtney and McAnespie maintained pressure on their opponents allowing McCarron slot over another white flag with the left boot.

In the ninth minute, the second goal arrived as player of the match Casey Treanor, who got the winning score the previous week against Armagh, finished to the net and Monaghan were 2-4 to 0-1 clear.

Referee Siobhan Coyle was consistent with her punishment of technical fouls which sometimes frustrated Tyrone.  Emma Brennan left the field on 10 minutes leaving the visitors with 14 players, the first of three yellow cards over the hour.

McCarron (2) and McEnaney stretched Monaghan’s advantage before McCaffrey ended Tyrone’s 18-minute drought leaving it 2-7 to 0-2 on 20 minutes.  But when restored to 15 players, the misery didn’t end as McAnespie burned her marker again before supplying Treanor with a second major.

On 26 minutes, the fourth arrived as Treanor, McEnaney and McAnespie all played a part.  Captain McCarron led by example and it was 4-7 to 0-2.

Courtney and McEnaney (2) brought Monaghan to double digits in white flags before McCaffrey left it 4-10 to 0-3 at half-time.  However, Tyrone were already back down to 14 personnell again as Niamh O’Neill was rested following dissent towards the match official.

The game was lost for Tyrone now and attention turned towards next week’s relegation play-off against Wexford next week.  With Dublin and Waterford waiting in the championship, Kevin McCrystal’s side needed to regain pride and proceeded in that fashion.

Tyrone’s best chance so far came 60 seconds later as Gráinne Rafferty tested the credentials of the composed keeper Edel Corrigan.  McHugh’s rebound deflected over the bar.  Cora Courtney made it 4-13 to 0-6 on 42 minutes.

Regan Fay got another for Tyrone who were determined to win the second half but again, they faced another 10 minutes minus a player.  Emma Mulgrew caught McEnaney late after she’d released possession and faced a sit down in the stand.

The latter put the icing on her performance 10 minutes from time as McEnaney netted for the third consecutive game and Monaghan were 5-13 to 0-7 up.  But Tyrone dominated the final quarter and hit 1-4 unanswered before McQuillan and Holly McQuaid concluded Monaghan’s account.

O’Neill, who struck 2-7 against Cavan, finally got her first point on 54 minutes.  And Tyrone’s top attacker on this day McCaffrey was rewarded in the next attack as her goal was instrumental in her finishing as the game’s joint top scorer with McEnaney and McCarron.

Brennan, Niamh Hughes and McCaffrey concluded Tyrone’s account.  A second period providing some redemption but another performance like the start could see this senior county become a Division Three side very soon.

Monaghan were worthy advancers and at one stage, looked set to top the group.  Their encounter with Kerry will give a better idea were both teams stand for the summer.  But it promises to be a clash deserving to be a national semi-final!