FOOTBALL: Mum’s the word – The Big Interview with Niamh Kerr of St Judes 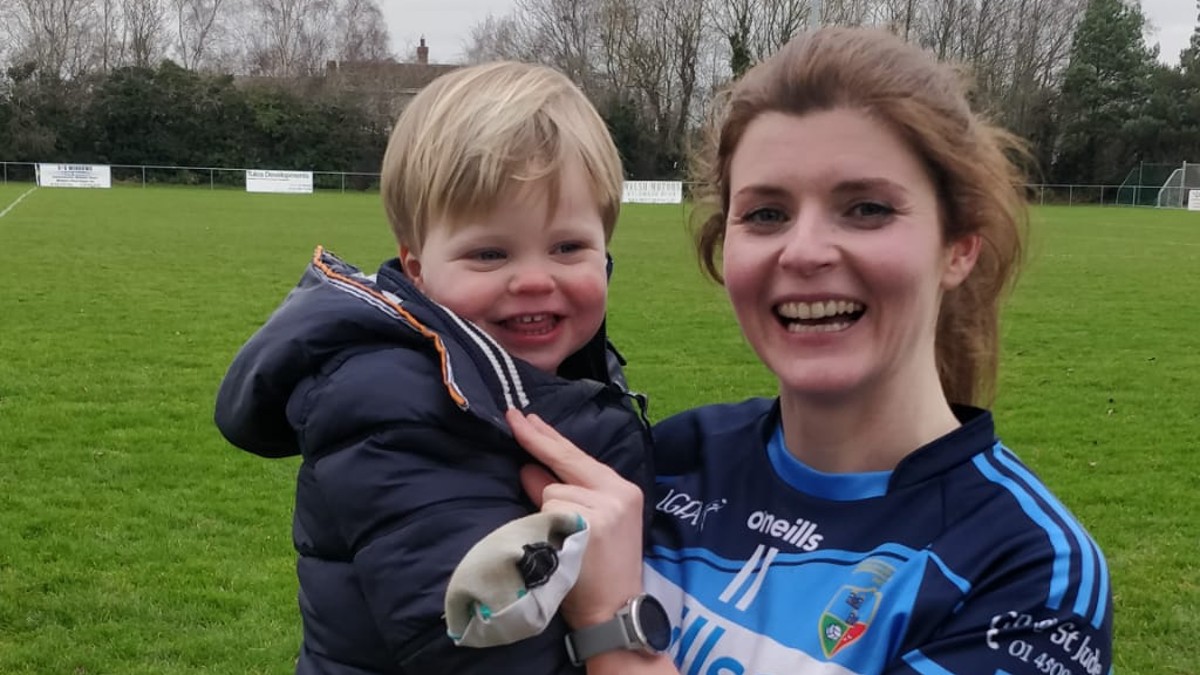 The contractions intensified minutes after she crossed the finish line and, within a few hours, American athlete Amber Miller gave birth.

Her miraculous 2011 Chicago Marathon tale is an example of what can be achieved even in the most extreme circumstances. Many other female athletes have accomplished the impossible on the other side of pregnancy, too.

Serena Williams, Paula Radcliffe, Jessica Ennis-Hill and Laura Kenny have all made history in the weeks and months after childbirth.

Closer to home, Sonia O’Sullivan is one of the most famous examples, where she won an Olympic silver medal just over a year after giving birth for the first time. Two fellow Cork greats, Bríd Stack and Briege Corkery, are among the list too, with many more mothers gracing the playing fields week in, week out across the country.

Today, Niamh Kerr will look to fulfil a lifelong dream when she lines out for St Judes in the currentaccount.ie All-Ireland Junior final.

The 34-year-old gave birth to her son Ben two years ago and believed she would never play football again. But the Monaghan native trained hard to get back in action and knows she made the right choice.

“When I got pregnant, I was 31 and I was thinking to myself that is probably it for me now, I will be too busy with a baby. I decided that I wasn’t going to go back,” said Kerr.

“I had Ben in February 2020 and the pandemic hit then, we were all in full lockdown. It was hard enough being a mom for the first time, being in the lockdown and not able to see family and that.

“When you are a first-time mom, support is so important. Not having that, it was a difficult period those first few months.”

Kerr hails from Ballybay, where she grew up in a Gaelic Games-mad household. Her father, Paddy Kerr, was a star for Monaghan, he won provincial honours with his county and captained UCD to glory too.

His youngest daughter, Niamh, played her club football with St Brigid’s in Monaghan before she relocated to Dublin and ended up with St Judes in early 2017, after a lengthy lay-off from the game.

She was part of the Farney county set-up at minor level before she also featured in the senior squad.

But her job as a Radiation Therapist demanded long hours and having lived in Dublin and Galway over the years, she was never able to devote enough to the cause back home.

She took an extended break from football in her 20s, where she took some time to go travelling across Southeast Asia with her partner, Richard.

Kerr also took up job posts in University Hospital Galway, Beaumont Hospital and the Hermitage Medical Clinic. She now works out of St Luke’s in Rathgar, near to where she lives in Templeogue.

The young family are located close to the St Judes club, who she will represent against Mullinahone in today’s currentaccount.ie All Ireland Junior Club Championship final in Baltinglass.

“One of the first things that reopened after lockdown was outdoor training,” said Kerr.

“It was Richard who really encouraged me to go back. He knew how much I loved playing. I was a bit unsure but I ended up going back and we got to the county final.

“We were beaten by a better team on the day and I really did think then that that was it. “Then we had the break at the end of the season before it restarted, I thought to myself I never got a full crack off it last year because I only returned halfway through the season, I had Ben at the start of the season.

Kerr, who had previously ran in two marathons, began with 5ks and doing her own strength and conditioning training five weeks after having her child in 2020.

Then four months postpartum, she was playing football again and she never looked back, with St Judes now on the brink of an historic first ever All-Ireland title.

She wants other mothers to know that their careers aren’t over when they have a child. If they can get fit again, there is always an avenue and maybe even silverware around the next bend.

“I never thought at 34 I would be playing in an All-Ireland final,” said Kerr.

“As I said to the girls at training the other night, the last time I got anywhere near an All-Ireland final was nearly 20 years ago so it doesn’t happen very often for a lot of people. We have to go for it, give it everything we have.

“And even though I am not from the club, there is something different about a club winning an All-Ireland.

“When it’s with the county you have girls from different clubs, while you would have been very good friends with them there is a different feel.

“When it is with your club it is even more special. It would be incredible if we did it.”

Kerr always marvels at the sense of community in St Judes, how she was welcomed with open arms and taken in as one of their own.

But even with the potential success awaiting her later this afternoon, it’s the memories that she can create with her fiancé Richard and son Ben that can eclipse it all.

“I’ll admit it, it’s hard, it’s much harder when you have a child,” said Kerr.

“You feel guilty for leaving. You could also be having a match after a night when you have had very little sleep and it’s hard.

“You do have to rely on your partner and your friends and family. I have a very, very supportive partner, Richard knows how much I love playing.

“But it’s great for Ben, I was thinking about the mental and physical benefits of playing football but you are teaching your kids life lessons without even realising.

“They are seeing you be passionate about something. They are seeing you work and commit to something, and love what they are doing. There’s such value in that, teaching your kid those things. You’re inadvertently teaching them life lessons. It’s hard but it’s definitely worth it.

“I am playing every single game like it’s my last now. If I hadn’t made the decision I wouldn’t have experienced the year we had. I think about that all the time. I am so glad that I didn’t decide to stop two years ago.

“I have made memories, I have pictures of me togged out after a Leinster final with Ben in my arms and Richard beside me.

“I wouldn’t have that if I had quit.”