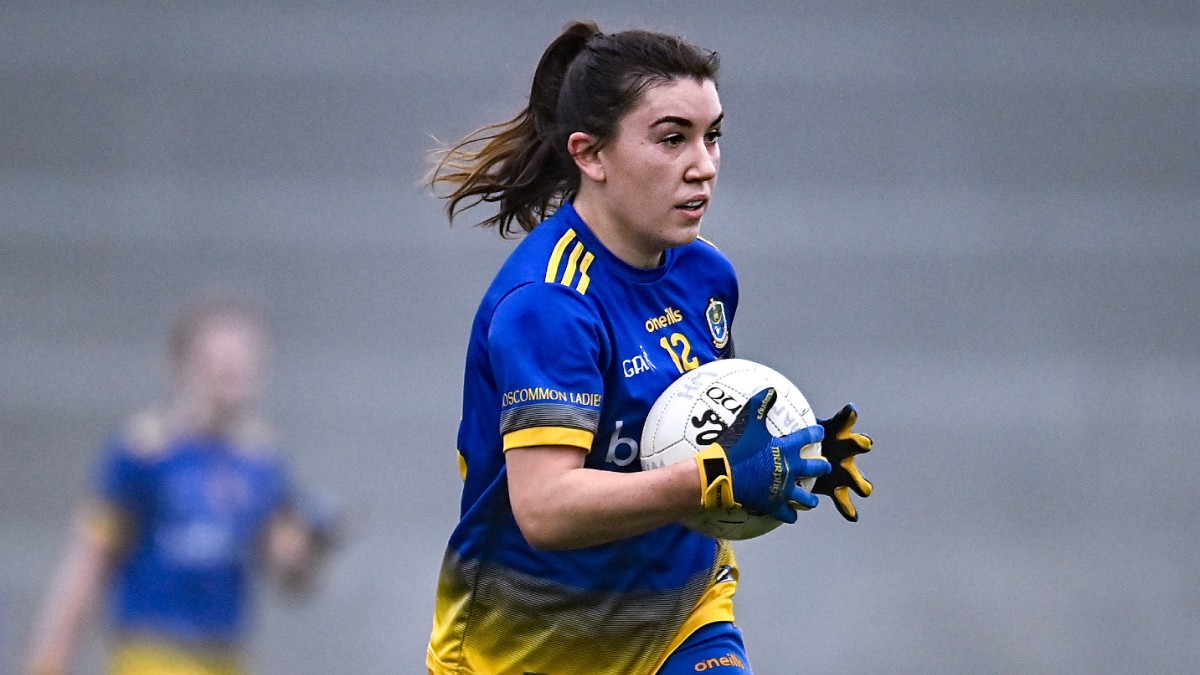 Joanne Cregg’s parents came to visit her in Galway on Christmas Day last year. She had Covid. Her housemate helped carry her down the stairs and she got to wave to them through the window. It was a grim Christmas Day.

Cregg had just lost her sense of taste and smell while her brother Liam, who suffers from asthma and was one of her close contacts, was the first pitstop for parents Brendan and Geraldine when they arrived out west that morning.

Another of Joanne’s close contacts, Sharon Lynskey, tested negative for Covid-19 but she forfeited her Christmas to keep others safe and ensure her friend and housemate Cregg didn’t end up in hospital.

Cregg is a doctor in University Hospital Galway and she was just a few months into her residency in the surgical unit when she began to experience the symptoms that would stay with her for six months.

But she returned to Roscommon duty for a mighty season from a personal point of view. The Rossies didn’t set the world alight in the Lidl National Football League or TG4 All-Ireland Intermediate Championship but the 28-year-old was a standout performer throughout.

And the Michael Glavey’s forward will turn her attentions to life Down Under now as she calls time on her Roscommon career.

“I am moving to Australia in January. I got a job in Perth Children’s Hospital so I am going there, for I’m not sure how long,” said Cregg.

“I always wanted to go to Australia, my sister lives in Sydney, on the other side of the country, but it is one step closer.

“I had planned to go in July but I got a job in January and it worked out way better. A paediatric job and something that I really wanted to do. It is a really good opportunity to gain a lot of experience.

“Part of me would love to be staying to continue playing football for Roscommon and play until I can’t play anymore. But you know when it’s time, you have to move on and try something different.

“For me, it has made me realise that football is huge for me. I love it and it was a massive part of my life. But I also have my career at the moment and travel. You want to experience new things.

“We have been locked down for so long, when an opportunity to travel and to work and gain experience over in Australia comes about you kind of have to take it.

“Hopefully I might try to play football over there or play a little bit of Aussie Rules.”

Cregg wasn’t always destined for life as a paediatric doctor, she is a qualified piano teacher and that pointed her towards the more obvious choice of primary school teaching.

Her father, who is also the Roscommon LGFA Chairperson, is principal of their native Cloonfad National School.

And after studying a science degree at NUI Galway, Cregg was a teaching assistant in the anatomy lab at the University between September 2015 and April 2016.

But with a science degree in her back pocket, there was always an opportunity to branch off and study medicine and Cregg wanted to explore every available avenue.

“I would love to be a primary school teacher. I actually had applied to St Pat’s for the two-year Masters in Primary School Teaching. I applied for that and I was also studying for the GAMSAT exam, which is the post-graduate entry exam,” said Cregg.

“I would be a big believer in karma or fate. So I said I would try the GAMSAT once. If I got it, I got it and that was me doing medicine. If not, I wouldn’t try a second time and I would go and do primary school teaching.”

But Cregg got the necessary results and after four years of studying medicine, her final exams were brought forward in 2020. The normal routine sees prospective doctors doing their exams in May and then they get two months off before they start in July.

However, during a global pandemic it was a different scenario. Cregg did her exams in April and two weeks later she was at the coalface of it with Covid-19 gradually taking a hold.

The second wave was even worse and panic was starting to set in before Cregg’s own health came into question.

“I remember working when everything was open, pubs and everything were open at the time,” said Cregg.

“It was about a week before Christmas, or even two weeks before and there was this weird, eerie, vibe in the hospital that we were all really, really nervous.

“Teams were dropping like flies. Then it got really bad. The time where I was sick and I was off, it was very bad in the hospital. In our group chat, people were just dropping like flies, they were saying they couldn’t work, I am now a close contact or whatever.

“HR were ringing us and asking could you come in and work for 24 hours today, I was on the phone to them saying I currently had Covid, I couldn’t.
“It was a real sense of panic. I don’t think people outside the hospital really realised that.”

Cregg got her positive test on 23 December and it wasn’t until May that she finally got the all-clear following a scan on her heart and lungs.

Now she is dreaming of a normal festive season and although she is working on 25 December, she is off either side of it.

Last year, the household postponed their Christmas Day until late January, when Geraldine served up dinner, and there were even presents exchanged.

But there will be the usual Zoom calls to her sister Ailish in Sydney and her brother Diarmuid in San Francisco while she plans out a brand new adventure on the opposite side of the world.

She hopes the Roscommon Ladies and their new manager Ollie Lennon can get the job done on the pitch without her.

“I would love to come back from Australia and see them playing in senior football.”