FOOTBALL: “Nobody had to lift it and drive as they all stepped up to the plate” – Emma Kelly 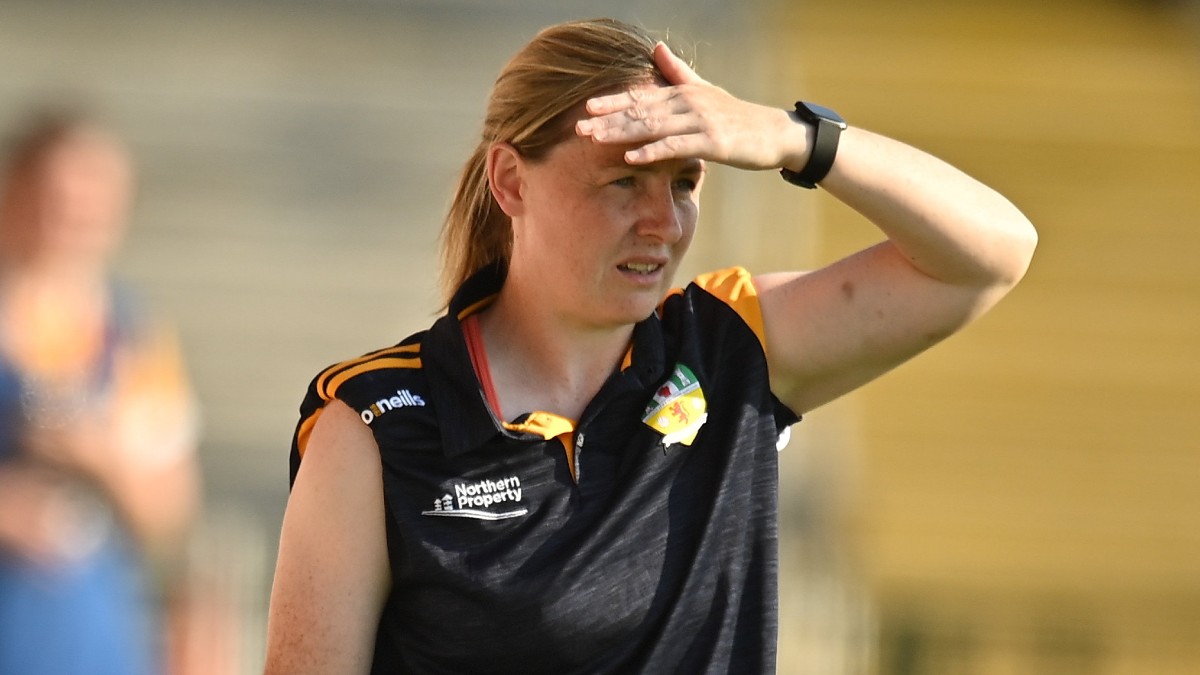 Antrim manager Emma Kelly said their first TG4 All-Ireland Junior title in ten years was down to a superb all-round team performance as they saw off Fermanagh in this replay at the Athletic Grounds in Armagh.

Antrim laid the foundation for victory in the opening half, with two early goals helping them lead y 2-5 to 0-6 at the interval and they never looked like relinquishing that advantage after the restart.

“The team performance there was all-round. Nobody had to lift it and drive as they all stepped up to the plate,” said Kelly.

“If one person went quiet the other stepped up so it was a good team performance and it was a pity we couldn’t get more subs.

“The first goal was a deflection or a slip but made our girls think the luck might be on our side and we could kick on.”

And Kelly is determined they won’t rest on their laurels and wants to push on from this next year.

“Division Four will be our target now. Trials start in November and that’s it. We have good minors stepping out now and they will be looking to push on to senior so next year’s squad could be completely different. That’s a good thing as it pushes the rest and makes the whole team better,” she added.

Antrim had one hand on the West County Hotel Cup when they struck for goals from Lara Dahunsi and Cathy Carey in the opening seven minutes.

Grainne McLaughlin played a starring role for the victors, turning up the heat on a blistering hot day and top-scoring with eight points, five from play.

It was left to Eimear Smyth to carry the fight for Fermanagh and she kicked seven of her own, but unlike McLaughlin, had little support with Antrim just better in all departments on the day.

Antrim built on their 2-5 to 0-6 interval lead with Caitlín Taggart, Carey and McLaughlin pointing before Smyth finally added to the Fermanagh tally with a free on 43 minutes.

Taggart replied immediately to leave Antrim 2-10 to 0-7 up by the well-needed second water break.

Bláithín Bogue, so influential for Fermanagh in the drawn game, was held scoreless until the 47th minute when guiding a shot over with the outside off her boot, but this failed to ignite the Ernesiders as Antrim drove to the line with captain Carey rounding off the win with her second goal in the closing stages.

Fermanagh manager James Daly said they had hoped to rally after the restart but while they couldn’t get a foothold, he said there were a lot of positives from the campaign.

“We felt we would come out in the second half, we could get a goal and get right out on the front foot. But we couldn’t get to grips with their counter-attack,” said Daly.

“But it’s all positive. When I took the job in October/November, people laughed and asked, ‘why you taking that team, half the girls don’t want to play?’

“And we got it together. We played our first league game and were beaten by 21 points. But we got to grips with it. We looked at who we had, we pulled a few more girls in, we regrouped and saw what we could do. And we will do the next year, we will get more girls in next year.

“I feel we are a year ahead of the cycle here. I could count ten or eleven players who should be on this panel but they aren’t. And we got to an All-Ireland final and lost in a replay, so there are a lot of positives to build on,” he added.