FOOTBALL: “Outside of my family it’s the proudest day of my life” – Eamonn Murray 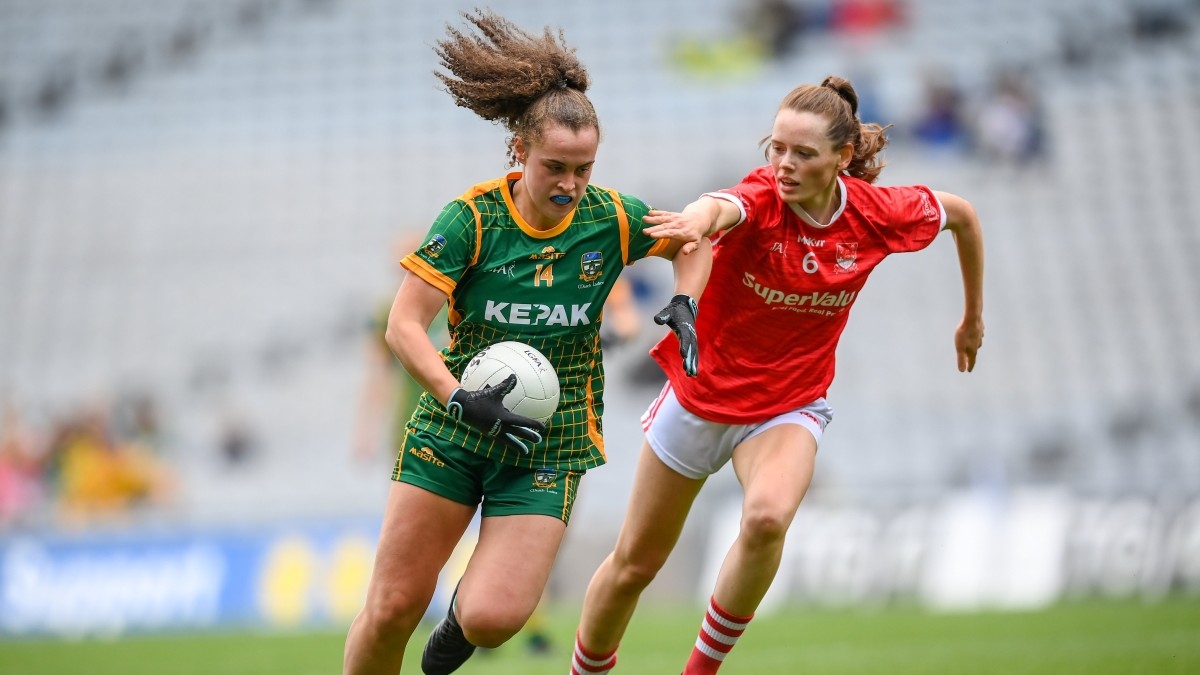 By JOHN FALLON  (Emma Duggan of Meath in action against Méabh Cahalane of Cork during the TG4 All-Ireland Senior Ladies Football Championship Semi-Final match between Cork and Meath at Croke Park in Dublin. Photo by Stephen McCarthy/Sportsfile)

Meath manager Eamonn Murray said it was the proudest day of his life after witnessing the character shown by his charges to stage an astonishing comeback and qualify for their first ever TG4 All-Ireland SFC final.

Cork looked set for their sixth All-Ireland final showdown with Dublin in eight years when they led by six points in the final minute but Meath rallied to fire in two goals and force extra-time.

And they made the most of their escape with Emma Duggan leading the way as the reigning intermediate champions secured their place in the TG4 All-Ireland for the first time in history.

“Outside of my family it’s the proudest day of my life. They are a very special bunch and I’m a very proud man to be involved with them,” said Murray.

“We have always told them never give up. Play to your system and don’t give up until the last second. Dreams do come through and there is still another hour of football left in this season.

“We saw a lot of bad days, days when our hearts were broken. But we saw a lot of good days too, winning 16s and minors but this tops it all off.

“We had good subs and we had good fitness and we are learning all the time. See what we did at the end? We held the ball. Cork did that for years, over and over, and we did it for a minute and a half or two minutes. And that’s down to a lot of things. The coaches we have are top class and the girls never panicked. They are all leaders in themselves, we have a good balance and they drive the system on.

“We will enjoy this one and worry about Dublin during the week. But we don’t tend to worry too much about the opposition, we try play our own football and look after ourselves than worrying about the opposition. They will have a good day’s work done if they beat us.”

The sides were level at 0-4 apiece at the end of the opening half but Cork took a firm grip on the game after the restart. Eimear Scally kicked three points, two of them from frees, in the opening eight minutes and then Doireann O’Sullivan finished to the net from close range after Sadhbh O’Leary’s shot was brilliantly saved by goalkeeper Monica McGuirk.

That pushed Cork 1-7 to 0-4 in front and while Emma Duggan pulled back a good point for Meath, Cork took a six points lead into the second water break when Doireann O’Sullivan tacked on a point.

Substitute Niamh Gallogly pulled back a point for Meath shortly after coming on and Stacey Grimes also hit the target to cut the gap to four with ten minutes remaining.

But Cork seemed to have wrapped it up when they got their second goal when Katie Quirke and Doireann O’Sullivan combed for Scally to fist the ball to the net and put them ahead by double scores with five minutes remaining.

However, Meath never gave up. Gallogly got her second point and then in the final minute Stacey Grimes converted a penalty and from the kickout, they won back possession for Vikki Wall and Máire O’Shaughnessy to combine and send Duggan through and she shot low to the net with less than 30 seconds remaining to send the match to extra-time.

Grimes edged Meath in front before Doireann O’Sullivan tied the sides and when Duggan pointed for Meath, another Scally free saw them level at 2-10 apiece at the interval in extra-time.

Duggan edged Meath back in front five minutes from time and she wrapped up a famous win when she landed another point with the final kick of the match after Cork failed to get an equaliser at the other end.

Cork manager Ephie Fitzgerald congratulated Meath on their victory and was obviously disappointed not to hold out when they led by seven points going into the closing stages.

“It’s hard to decipher, two goals in the space of a minute when we seemingly had the game tied up. I’m disappointed but at the same time very proud of the girls as well. They gave it everything.

“We had a bit of a meltdown for a couple of minutes and probably gave them a lot of momentum going into extra-time as well. Congratulations to Meath, they never gave up and in extra-time they were worthy winners,” he said.