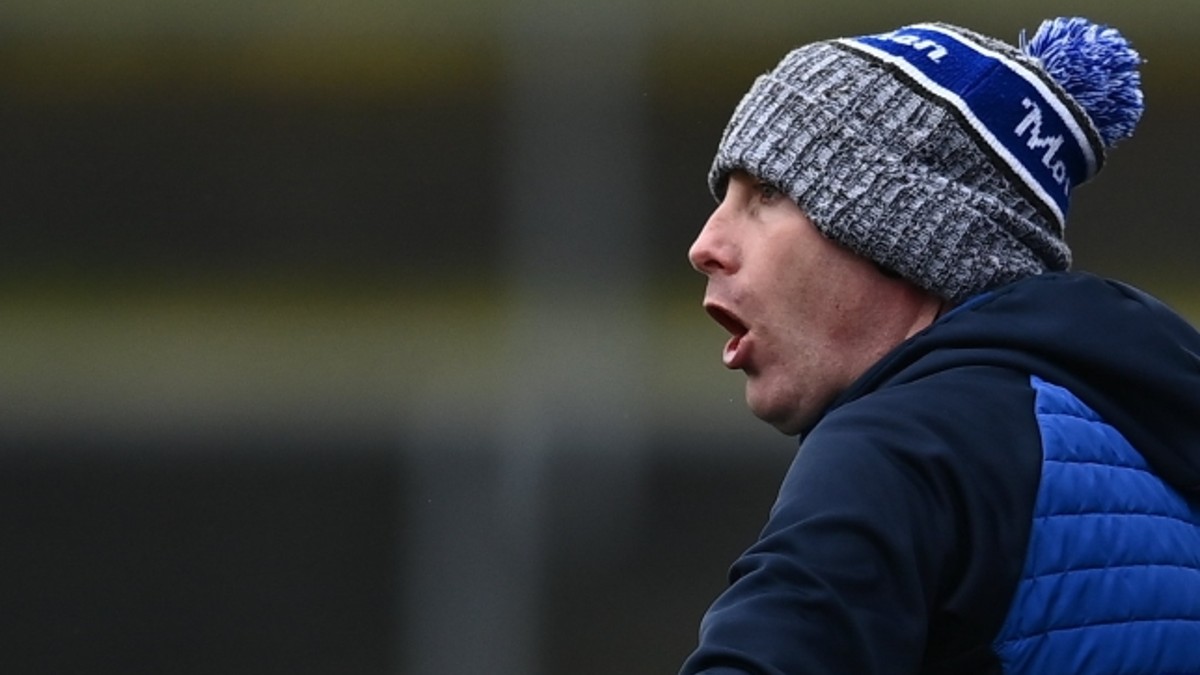 Kerry had scored 1-5 in the third quarter, Monaghan were rattled and when they reconvened on the side of the Tuam Stadium pitch for the water break, their manager looked for some inspiration.

Unfortunately, Monaghan couldn’t grasp the same momentum heading into the closing stages of a 1-11 to 1-14 Division 2 semi-final defeat.

Afterwards, their manager knew the same questions would come up, but he wants to change the mindset, Monaghan are not performing above expectations, they are a county that can compete.

“I only gave one interview after the game and the same sort of question was asked, a moral victory, people didn’t expect us to do too much,” said Kearns.

“Being honest, we went up to win that game. We were convinced we had enough armoury to do the damage on the day. And we were very, very sick and disappointed after the game, if I am speaking the truth.

“No matter who I speak to, the expectations are very low for this bunch of girls. The first meeting we had with these girls, we set our own goals and expectations.

“They knew what they were and it’s up to me as a manager and a management team to facilitate those goals. We know where we are and what we want. At the minute we are definitely not punching above our weight.

“It does hurt when you hear those things, I was just talking to the management team. Monaghan in general has that sort of mantra where they are punching above their weight whether it is the ladies or the men.

“From a Monaghan person, more so than a Monaghan manager, it gets tiring after a while listening to it. We know where we want to go and we know what we have to do to achieve that. We are no different to anybody else, from that perspective.”

Of course, there are reasons for the commentary outside of the camp.

After all, 15 players departed since last year’s campaign and that left a gigantic task awaiting Kearns when he entered the fold this year.

The 40-year-old hails from the small rural village of Scotshouse and he devoted much of his life so far to the Currin GAA club.

The former Monaghan minor was a selector for the Currin senior men’s team three years ago, before he was installed as manager. And he was delighted to take charge of a sleeping giant in a time of transition.
Monaghan were back-to-back winners of the TG4 All-Ireland Senior Championship in 1996 and 1997.

They have taken part in five deciders since then and lost them all.

But with a new wave of young talent coming through the ranks, there is renewed optimism. And players like midfielder Jodie McQuillan could be their leading lights for years to come.

“Jodie is an exceptionally calm individual for such a young girl. I think she is only 19 and she has a calmness that is way above her years,” said Kearns.

“She stood up there on Sunday and she hit 1-6, with a penalty as well. She is calmness personified really. Jodie is our dead-ball expert, if you want to call her that.

“She is very accurate in front of goals. We are blessed to have her. She is an exceptional talent.”

But McQuillan is only one of a new wave, which includes Monaghan goalkeeper Orna Kelly, who has just turned 17. They have been given the opportunity for first team experience now and reaching a Lidl NFL Division 2 semi-final was a huge achievement.

“We do have a number of young girls, a lot of quality there from the minor panel. There are at least four or five that we are looking to pull into the panel soon, to get them integrated into the senior panel,” said Kearns.

“We have a lot of 18, 19-year-olds, it’s an extremely young panel and the future is bright. There are a number of Ulster winning teams there and an All-Ireland winning minor panel as well. There is enough talent within that group to do something.”

It often takes some time to adjust to top tier football but Monaghan seem to be doing just fine without their senior stalwarts.

Kearns was given a poisoned chalice when he took the reins but he had a number of conversations and left the door open to those who wish to return in the future.

“When we came, we came into the job very late. We are probably eight weeks behind every other team in the country in terms of pre-season,” said Kearns.

“So we knew what had gone before us, there was a big turnover of players. Our main objective was to get the girls, we knew confidence was low, so that is what we concentrated on.

“We very much focused on that end of things a lot. You can see the bounce that we got from that. And we will continue to focus on that because there is enough talent within the group to push on and achieve good things.

“That core group of girls, the majority of them that left, they all came into the senior panel at the same time.

“I rang the majority of them and they all have their own personal reasons. A number of them left themselves the option of returning next season. A lot of them have retired. So a bit of everything.”

Armagh are next up, Monaghan will face their Ulster counterparts at the end of April, having lost to them already in the League this year.

Armagh claimed a 0-13 to 0-6 win earlier this season but Kearns says his players still have plenty in reserve and he thinks a team like Meath have provided the blueprint for what’s possible.

“Meath are inspiring and they are no different than ourselves. They came from Division 2 last year and pushed through to win an All-Ireland,” said Kearns.

“You can see what they did last weekend, pushed on to a Division 1 final. It’s an incredible story, it really is, and we get great inspiration from the Meath ladies.

“In that middle of that huddle last Sunday, it would break your heart. The girls were devastated afterwards. But I said you have got to lose to win. We understand that. We will use that and we will learn and move on.”