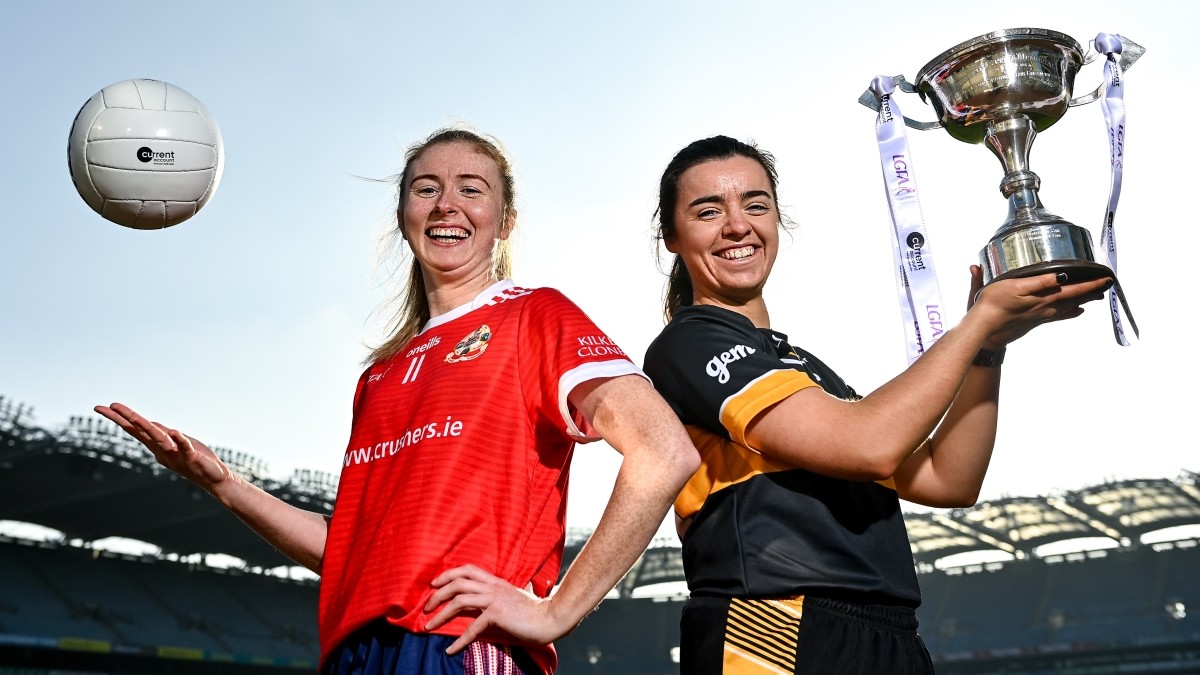 Compiled by Jackie Cahill  (In attendance at a photocall at Croke Park ahead of the currentaccount.ie All-Ireland Ladies Club Football Finals are Louise Ward of Kilkerrin-Clonberne, Galway, left, and Laura Fitzgerald of Mourneabbey, Cork. Photo by Seb Daly/Sportsfile)

currentaccount.ie All-Ireland Senior Club Finalists Kilkerrin-Clonberne and Mourneabbey have each made one change in personnel for Saturday’s decider at St Brendan’s Park, Birr (1.0 – Live on TG4).

Siobhán Fahy, who replaced Katelyn Mee with ten minutes remaining in the semi-final win against Donaghmoyne, earns a start for Kilkerrin-Clonberne, with Mee named among the substitutes.

For Mourneabbey, there’s a start for Aisling O’Sullivan, who replaced Eimear Meaney during the second half of the emphatic semi-final victory over Dunboyne, with Molly Burke dropping to the bench.

This eagerly-anticipated clash is a repeat of the 2019 decider between the teams in Limerick.

Comparing the teams on that occasion, there are 14 starting survivors on the Kilkerrin-Clonberne side, with Chloe Costello in for Galway’s 2004 TG4 All-Ireland winning captain Annette Clarke, who remains a key member of the panel.

Mourneabbey have a healthy contingent still at their disposal too, with 12 players who lined out from the start in 2019 listed again for this Final.

That was a first ever Senior Final appearance for Kilkerrin-Clonberne, who were left heartbroken after a one-point loss.

With the clock ticking down in the final minute, Cork outfit Mourneabbey worked the ball brilliantly between the lines and Laura Fitzgerald finished the move by slotting over the winning point.

Former Dublin ace Noelle Healy was a member of Mourneabbey’s winning side on that occasion, and instigated that late winner, but she’s since returned to the capital.

Fitzgerald remains a player that Kilkerrin-Clonberne will have to keep a close eye on and the forward star is in blistering form for her club.

Fitzgerald has netted ten times in her last three club outings – including a four-goal salvo in the Dunboyne win.

Mourneabbey were at their ruthless best on that occasion as a Dunboyne side containing Meath TG4 All-Ireland Senior winners and All Stars Vikki Wall and Emma Duggan was put to the sword.

Kilkerrin-Clonberne, meanwhile, were thankful for two goals from experienced county player Nicola Ward in a 2-8 to 0-8 success against five-time champions Donaghmoyne.

Ward went off injured early in the 2019 Final with a knee injury and having her available for the full hour potentially on Saturday is a big boost to Kilkerrin-Clonberne’s chances.

Mourneabbey are aiming for a third successive crown, following previous title wins in 2018 and 2019.

They know, too, what it’s like to experience final heartbreak, having lost out in Finals in 2014, 2015 and 2017, before finally landing the Dolores Tyrrell Memorial Cup in 2018 with victory over Foxrock-Cabinteely.

Fitzgerald may have grabbed the headlines with 4-2 against Dunboyne but Doireann O’Sullivan was in superb scoring form too, helping herself to 2-7 on the day.

Meaney is a brilliant defender who did a fine job on Emma Duggan, while skipper Bríd O’Sullivan was pressed into a direct marking role on Vikki Wall – a role she performed admirably.

Nicola Ward and twin sister Louse, who’s club captain, are key figures for Kilkerrin-Clonberne as they aim to erase the memories of 2019 – and semi-final losses against Mourneabbey in 2015 and 2018.

The Divilly sisters, Olivia and Siobhan, are proven inter-county stars while a host of other key players, including the Noone sisters, Hannah, Eva and Lynsey, goalkeeper Lisa Murphy, defender Sarah Gormally, and attackers Chloe Miskell and Ailish Morrissey, have worn the county shirt at various grades.