FOOTBALL: Recovering from serious injury during Covid – The Big Interview with Ceire Nolan of Louth 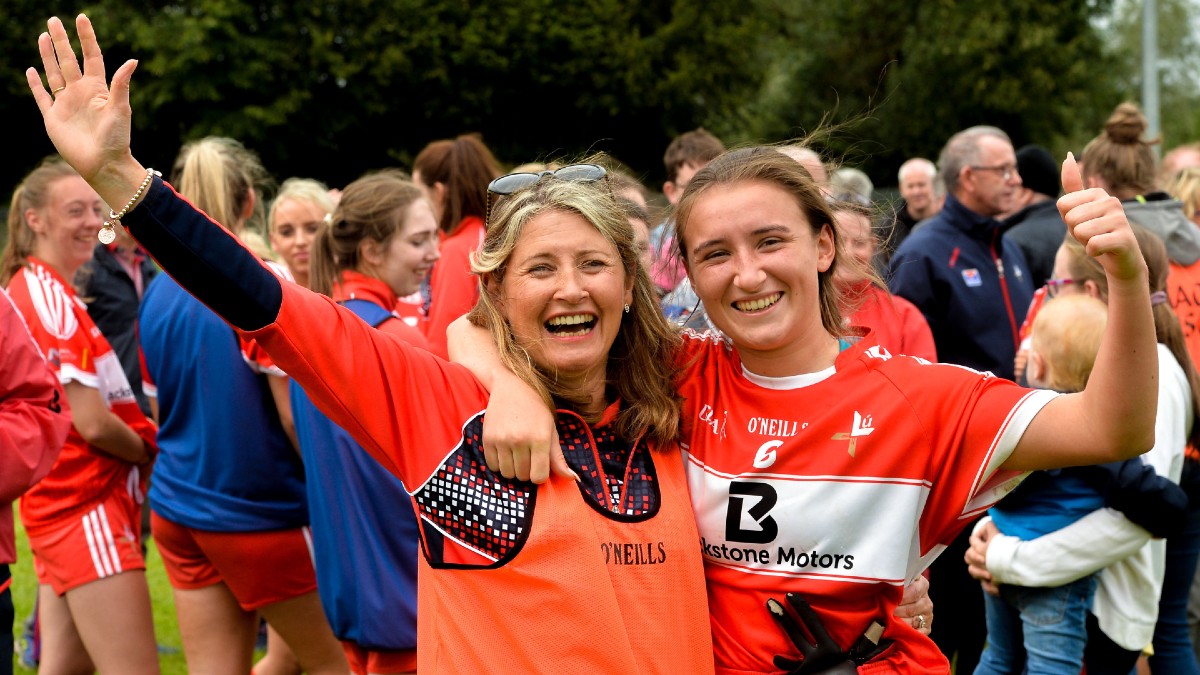 By EMER CONNOLLY  (Ceire Nolan of Louth and her mother Martina celebrate after the TG4 All-Ireland Junior Championship semi-final win over Derry in 2018. Photo by Oliver McVeigh/Sportsfile)

Louth’s Ceire Nolan is a firm believer that a positive attitude is half the battle in recovering from a serious injury.

And the 21-year knows all about it having bounced back from a torn cruciate suffered just as Covid-19 struck last year.

The injury happened just before her college closed in March 2020 but with her mum Martina leading the way, it was decided to treat injury and recovery in the most positive manner possible.

Nolan, who has starred for her county for the past four years, says that while she was gutted to sustain the injury against Derry, the support of her family, her team-mates and her physio, Laura Grills, helped her recovery.

“I had a week after it happened and then the college shut down all in that week. I had a week of feeling sorry for myself and then mam said to just get back out there. I could never let it get me down. I know if I got into a dark hole I would find it very hard to motivate myself to get out. So, I just got on with everything. I actually think that is the only thing that got me through it, the positivity.

“Mam would always say positive mental attitude, PMA, and if we have a positive attitude we can do anything. She comes to everything with me, she comes to matches, she drove me to physio, she drove me to training, watched me while I was training, I think having her with me probably helped me as well. A cruciate injury can be a bit lonely. You are doing all the rehab on your own, it can get into your head. Having Mam there and having the physio there as well were the two people who were instrumental in my return,” said the St Fechins star.

Many people who tear the cruciate take 12 months or longer to recover but Nolan was back within nine months. Although the onset of Covid-19 meant that she had to wait for four months to have her surgery, that time was well spent.

“I had an extended period between the injury and the operation. Originally the operation had been planned for the end of April and then the HSE took over all the hospitals because of Covid so I had wait until July,” she recalled.

She had started back playing football prior to her operation and in hindsight she feels the delay between the injury and the operation was a blessing in disguise.

“I think it made things easier. When I went in for the operation the surgeon actually commended me on the strength of my legs and the shape I was in going into the surgery. I couldn’t walk for two weeks after I tore my cruciate. And then the muscles started to deteriorate a little bit. When I went in it was as if it was normal. I was back running 5Ks and everything. I actually played a football match the week before I went in for the surgery, an in-house game. It was grand. It’s a very strange injury. I think maybe the additional time did help me because when I got out my legs were still very strong and maybe that helped me in the recovery.”

Prior to the surgery, at one stage she was advised by another physio against the operation after he saw how well she was progressing. However, she felt that if she didn’t go for it, she may suffer injury-wise later in her career.

“He thought that I was in very good shape. I had done Sports Science and I have some understanding of my Physiology and Anatomy. I just thought that if I was going to leave it maybe down the line something else might suffer as a result. That was my biggest fear, that there would be more pressure on a different muscle in my leg. So I think that was probably the deciding factor, that I never wanted to go through anything like this again. So that was it.”

She hasn’t looked back and while the recovery was gradual and tough, she is delighted with her progress in the past few months.

“It (the knee) feels completely normal. It feels exactly like it felt before, if not better. I have never had any trouble with it. It feels the same. I never have to worry about it. I played the whole League campaign and it never even crossed my mind.

“I was a bit nervous going back because they always say about nine months. It had only been nearly six months when I would have been going back training. The extra time actually gave me time to feel more confident in myself and in my knee and to work on my knee and make sure it was 100%.”

She said that despite all the negativity around the cruciate injury, with the right attitude it can be overcome and a full recovery is very possible.

“You can come back from it. When I heard cruciate I was like that’s it, no football for me for God knows how long. I just want to get rid of the stigma almost that is associated with cruciate injuries. Hard work pays off. Stick your head down and you will be grand,” she advised.

“It can make or break a Gaelic player’s career, the cruciate injury. I just wasn’t ready to stop yet. I have seen a couple of people who tore their cruciates and got back playing in higher divisions than ourselves, it was nice to see positive stories as opposed to what you hear about cruciate injuries like 12 months and then they re-tore it and things like that. I tried to avoid media that was negative and just tried to focus on myself.”

Nolan’s return to the pitch has been a great boost to her team and she played an important part in her side winning the Lidl National League Division 4 title last month.

And the Wee County will be hoping for a winning start to their TG4 Intermediate championship campaign when they take on neighbours Down in Newry tomorrow (2pm).

“We have been there or thereabouts for about four years. To do my cruciate last year and be able to be on the team with the girls for the League this season was unbelievable. It was the most rewarding thing that all the hard work in the past year paid off and to finally get out of Division 4,” she said.

Sport is very much part and parcel of the Nolan family life. Ceire’s grandfather Mick Nolan played inter-county hurling for Tipperary and was on the Roscrea team that won the first All-Ireland club hurling title in 1971, while golf and athletics are favourites among the family.

Ceire is hoping to combine sport and teaching in her career. She will graduate later this year with her Degree in Sports Science and Health from Dublin City University and will embark on her two-year Masters in Education (primary teaching) at St Patrick’s College in September. As St Patrick’s is affiliated to DCU, she will continue to play with the college’s football team.

“I am very excited about that. You get to play with people from all over the country. It’s something you never really get the opportunity to do other than in college,” she said.

On the club front, she is hoping that her club side St Fechins will make a big impression in this year’s championship, after winning the Intermediate championship in 2018.

“We are a senior club in Louth now. We are always there or thereabouts. We have been training really well this year,” she said.