FOOTBALL: Road to glory – The Big Interview with Megan Thynne of Meath 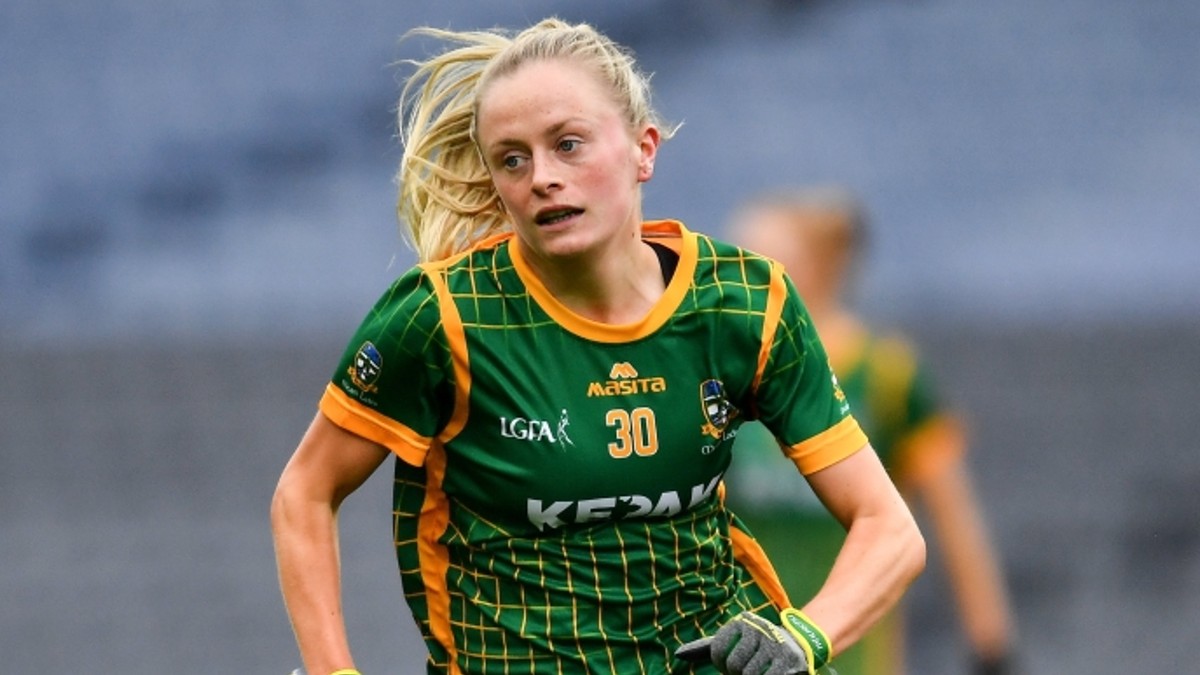 By DARAGH SMALL (Megan Thynne of Meath during the TG4 All-Ireland Senior Ladies Football Championship Semi-Final match between Cork and Meath at Croke Park in Dublin. Photo by Ray McManus/Sportsfile)

Megan Thynne would give anything to be back in Croke Park this weekend but instead she will have to watch the All-Ireland intermediate camogie final from the comfort of her own home.

It could have been successive Sundays playing in big finals for the Meath dual star were it not for a four-point defeat to Kilkenny at Nowlan Park on 28 August.

The 23-year-old was a second half substitute for Eamonn Murray’s side, and she helped steer the ship home in the last 14 minutes.

“My role this year is I’ve been coming on for the last 15 or 20 minutes of games. They were just like, it’s for the fresh legs more than anything,” said Thynne.

“The girls were playing brilliantly. I just had to keep running at them. There was a few people starting to tire. We didn’t want to let something like that lead us the other way.

“I couldn’t wait to get out there. It was so exciting even watching from the sideline, you just wanted to be involved in it. When you got out there it was something else, the atmosphere.

“Even when we turned over a ball, when we got a score, the place was crazy. It was definitely something else. I probably didn’t think about it as much. All you were looking forward to was being out there playing. It wasn’t too daunting, I really enjoyed it.”

“When you are playing Dublin I don’t think you can ever say that you have it,” said Thynne.

“But it was in the last few seconds, the crowds started getting louder, the people were counting down the clock. When we were holding onto the ball, we had practised that so much, to retain possession, don’t give it away too easily.

“Dublin were putting serious pressure on to get a goal. You couldn’t say they weren’t going to get a goal but we held our nerve very well. The crowd were getting louder, and counting down the clock, there were ten seconds left, it started to get real then.”

For Thynne, the Meath journey began back in 2015 and it coincided with the infamous 40-point defeat to Cork in August of that year.

The Dunsany youngster was still a minor at the time and with Meath struggling to find numbers that year, she was parachuted in for that game.
Monica McGuirk, Shauna Ennis and Vikki Wall also experienced that harrowing 7-22 to 0-3 loss first-hand at Semple Stadium in Thurles.

“I was playing that day, to be honest, we were really struggling back then. We were at the bottom,” said Thynne.

“We knew we weren’t going to come out with anything from that game, we just had to play it. It was quite demoralising. You never want to go through a game like that, especially a county game, and get beaten by that much.

“When we couldn’t even get a challenge match I think people just thought, it’s Meath, we are not going to get anything out of this. Those first years, counties would just say no. It was like we weren’t good enough for anyone.

“We felt like that a lot, playing some of the games even in the league. People just thought this will be one we can win. Then again in ways, as players it made us want to prove people wrong, that we were underrated in the last few years. It pushed us more to be better. It was good that people didn’t want to play us.”

Meath channelled that hurt, and under the tutelage of Eamonn Murray things turned drastically.

They conquered Divisions 3 and 2 in the Lidl National Football League with last December’s TG4 All-Ireland Intermediate Championship success another feather in the cap.

“Winning an intermediate title at the end of 2020, even people in Meath just thought the best thing here was for us to stay up,” said Thynne.

“Even for ourselves at the start of the year, if we were putting out what we wanted, we believed we could compete with all of these teams but the first main step was to stay up in senior.

“But as we went on the underdog title stayed with us. Each game we progressed, we knew and believed we could do it and we were training so hard.

“We are really honest with ourselves and with our football. Being the underdogs benefited us because there was no real hype. No one even thought we would win the final last Sunday until the last few minutes.”

And this year, Thynne pinpoints one of their defeats as the turning points. She really began to believe when Meath were beaten 1-9 to 0-10 by Cork in Birr on 10 July.

“You probably don’t want to be saying from the start that you want to be winning it,” said Thynne.

“But in the middle of the summer we played Cork in the first round of the championship. They were only after coming off a five-point defeat in the league final.

“We were playing them in the first round of the championship. We felt we weren’t great that day, we gave away a lot of possession and didn’t attack as much as we wanted to but we still only lost by two points.

“And it’s not that we had an easy run to a final or anything. Beating Armagh, Cork and Dublin, you played three of the top teams in the competition. But as we went on, we got a bit more belief, and it pushed us on a bit more. If you think you can do it and you are able to nothing can stop you.”

The Meath team met up at the Knightsbrook Hotel in Trim at 12.45pm on the morning of the All-Ireland final, they departed Trim at 2pm and returned at around 9pm. Thynne still has to pinch herself to realise what happened in between wasn’t just a dream.

“There were lots of happy tears,” said Thynne.

“It was definitely relief. As we all said, it was stuff of dreams. A lot of us had been in Croke Park as little girls watching the likes of Cork, Mayo, Dublin and Galway playing in finals.

“We dreamed of winning an All-Ireland in Croke Park. For a lot of us it was a surreal moment. We didn’t know if it was actually happening to us or not. Emotions were high. Croke Park was just electric. It was brilliant. You couldn’t be happier, we were on top of the world.

“I had family up there, we went over to them straight away. We got to see our close family and friends and there were more tears in the crowd than there was on the pitch.”